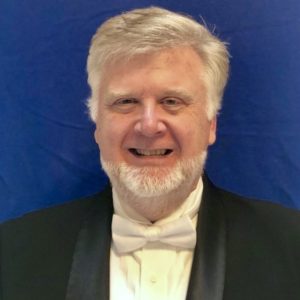 Dr. Robert S. Hansbrough is currently Professor of Music and Coordinator of Winds and Percussion at The College of Saint Rose in Albany, NY, where he has served since 1999. In April 2018, he was presented with “A Distinguished Alumni Award” from The School of Music at The University of South Florida.

He is the co-author of “Music for Concert Band”, a selected wind band literature textbook published by Meredith Music Publications in February 2014. His teaching responsibilities include conducting the wind ensemble and chamber winds as well as courses in music education, instrumental conducting and wind band literature. Further, he conducts The Empire State Youth Wind Orchestra (2001-present) and The Faculty Camerata Chamber Orchestra.

He taught for fifteen years in the Florida Public school systems. For twelve years, he was Director of Bands at Lincoln HS in Tallahassee where his bands consistently earned “Superior” ratings at The FBA District and State Festival Evaluations and performed at various invitational conferences. While at LHS, he was selected as The ASBDA Stanbury Award winner (recognizing excellence in young band directors) for The State of Florida, The Southeast Region and a National Finalist. During the last seven years in Tallahassee he served as the Coordinator of Instrumental Music for Leon County’s 37 public schools.

Dr. Hansbrough has conducted honor bands throughout The United States and Eastern and Western Europe and has adjudicated bands and orchestras from 26 states, Canada, Mexico and Hungary. He has served on the National Band Association Board of Directors as the Eastern Division Chair. His articles and research have been published in several professional journals including The NBA Journal, The School Music News, The NYSBDA Newsletter, The Bluegrass News, The Florida Director, Eastern European WASBE Journal and The State Department of Florida. Additionally, he has presented clinics and workshops throughout The USA and Europe. Recently, he was a Presenter at the 2018 Eastern CBDNA Conference at Yale University and The Eastern European International WASBE Conference in Mako, Hungary.

The College of Saint Rose Wind Ensemble was selected to perform at the 2016 New York State School Music Association’s State (NAFME affiliate) Conference in December, 2016 and The Empire State Youth Wind Orchestra was selected to perform at the 2018 International WASBE Conference, August 2018 in Mako, Hungary. His Dissertation, “A History of The Florida School Band Movement 1922-1995” has been cited by several publications and is in high demand for historical research in pivotal music education. He holds professional memberships in NAFME, NYSBDA, NYSSMA, NBA, CBDNA, WASBE, Phi Mu Alpha, Pi Kappa Lambda, Kappa Kappa Psi, Phi Beta Mu and is Lifetime Member of The Florida Bandmasters Association.

My areas of expertise are in instrumental conducting, literature research, conducting and music pedagogy methodology. I believe in positive reinforcement as part of a skill set for teaching music in an accurate 3:1 ratio. I believe that most students expect you to be honest with them in assessing their performance in a direct yet encouraging manner.

Throughout my teaching career, I have proffered that musicianship should be the foundation for any music career. Music is a performing art, and the mediums of performance, composition, improvisation, digital replication, and teaching must be practiced-based and channeled through a high quality of musicianship. It is important for student ensembles to experience the best literature written for their collective instruments at the highest possible performance standards.

I have presented wind band literature, conducting clinics and workshops throughout the United States and Eastern and Western Europe. My articles and research have been published in several professional journals including The NBA Journal, The School Music News, The NYSBDA Newsletter, The Bluegrass News and The Florida Director, and The State Department of Florida.

I hold professional memberships in NAFME, NYSBDA, NYSSMA, NBA, CBDNA, The New York State Association of College Music Programs, Phi Mu Alpha, Pi Kappa Lambda (Honors), Kappa Kappa Psi, Phi Beta Mu, and am Lifetime Member of The Florida Bandmasters Association. In 2014, I co-authored the second edition of, “Music For Concert Band: A Selected Annotated Guide for Wind Band Literature,” which is published by Meredith Music Publications. I am currently a certified adjudicator for major music organizations in New York and Florida and have served as a clinician/adjudicator for “Festivals of Music” since 1995.