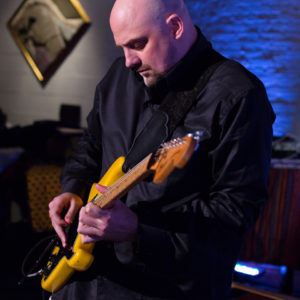 Described as “a guitarist of impressive technique and tone” (Los Angeles Times), “and far more importantly… a thoughtful and original composer” (Jayson Greene, Wondering Sound), Andrew McKenna Lee’s music has been commissioned and programmed by ensembles and organizations such as the Brentano String Quartet, eighth blackbird, Kroumata, Third Coast Percussion, Concert Artists Guild, the American Composers Orchestra, the New Jersey Symphony, the Albany Symphony, and the Los Angeles Philharmonic. As a guitarist, he has given concerts featuring his original compositions in some of the country’s most prominent venues, including New York’s Symphony Space, Zankel Hall at Carnegie Hall, the Brooklyn Academy of Music (BAM), the Annenberg Center for the Arts in Philadelphia, and Walt Disney Concert Hall in Los Angeles.

An artist who is both adept and comfortable in blending seemingly disparate styles, Lee has also performed with rock legends Billy Idol and former Sex Pistols guitarist Steve Jones in his own large ensemble arrangements of songs by David Bowie, Lou Reed and Iggy Pop. This stylistic fluency has found its way into several of his own works, including Sunrise from the Bottom of the Sea (Homage to Jimi Hendrix) and his Scordatura Suite, which prompted one music writer to comment, “I’m not sure if he was going for the rock/classical synthesis, but if he was, it’s the best effort of its kind I have yet heard.” (Soundboard).

To date, Lee has released several commercial recordings. His debut release on New Amsterdam Records, Gravity and Air, was named one of the year’s “Top Ten Best Classical Albums” of 2009 in Time Out Chicago. Released the same year, Solar/Electric also met with critical praise, most notably from composer Steve Reich, who claimed Lee’s realization of his work Electric Counterpoint, “a magnificent performance beautifully recorded.” His most recent project is The Knells, an art rock ensemble that combines Renaissance-inspired vocal polyphony with influences from psychedelic, classic, and progressive rock. Their debut album, described as a collection of songs that “sweep ahead, through passages of tolling solo electric guitar, of elegiac vocal melodies and harmonies, of note-bending quasi-Indian strings and guitar, of progressive-rock processionals” (New York Times), was released on New Amsterdam Records in November 2013, and was cited as one of the year’s most notable releases in The New Republic, The Washington Post, The New Yorker, The Daily Beast, Textura, and several others.

Mr. Lee is also active as an engineer and producer, having recorded, mixed, and/or produced several acclaimed albums for other notable artists, among them David T. Little and Newspeak, Daniel Wohl and Transit New Music, and William Brittelle and the American Contemporary Music Ensemble (ACME).