After she'd separated from her husband, Swathi knew the key to supporting her 7-year-old daughter was a master's degree from the United States. So for two years, FaceTime calls with Akshita would have to stand in for her hugs, as the girl stayed behind in India with Swathi's parents and Swathi came to Saint Rose to earn her master of science in computer information systems. 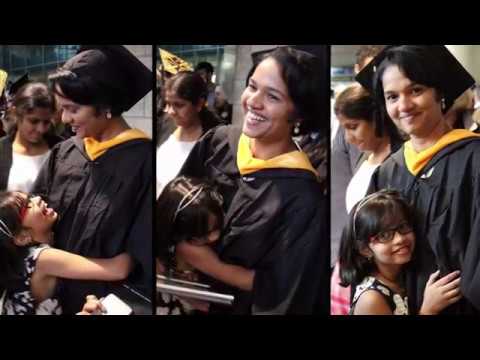 On those days when Swathi Thatiparthy misses the feeling of her 7-year-old daughter’s arms wrapped around her or the sight of a dancing, spinning child at play, her friend sends her own children to Swathi. 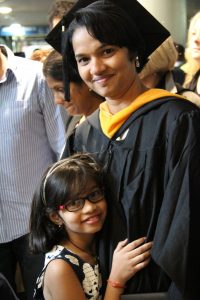 They joke with her about her English, and she spoils them like a grandmother would. They call her “Atha”, the word they use for “auntie” back home in India, where her daughter still lives, and it makes it less difficult when she ends those nightly FaceTime call with the girl. Akshita doesn’t speak much English. But aside from “I love you, Mommy,” she has one refrain from a world away: “Do good, Mommy. Do good, Mommy. All the best, Mommy. You can do it.”

Nightly FaceTime calls with Akshita and visits with her friend’s children also help her continue surging toward her future – a life that includes a job in the United States working in the computer science field and one where Akshita lives down the hall, not with Swathi’s parents in India.

After living apart for nearly all of two years, Akshita and several other members of Swathi’s family are expected to be in the audience when the 35-year-old from Hydebrad, India, walks across the stage at The College of Saint Rose commencement after earning her master of science in computer information systems. The last two years have been difficult for Swathi, but having left a marriage that limited her financially and kept her from pursuing her dreams of continued education, it’s up to her to provide for her daughter. Working for her masters at Saint Rose was a necessity. After she separated from her husband, her father offered her a chance to work in his business in India. But she declined.

“I want to stand on my own legs. I don’t want to take his business,” she says. “I want to give my daughter what I earn, what I have.”

What she had was a passion for returning to school and specifically attending Saint Rose. She earned her undergraduate degree in 2004 from JNTU in India and a master’s degree in computer science from the International Institute of Information Technology, also in India. She worked as a trainee in the computer science field, but after she married in 2007, her focus changed. Her life became contained within the walls of her home, her only concern her husband and family life. They moved to the Capital Region in 2008. Friends here told her wonderful things about Saint Rose, but her husband did not support her desire to take courses.

“I used to ask my husband, ‘Please, I want to study. I want to see that kind of life.’”

In 2010, the same year Akshita was born, financial and visa problems forced Swathi and her husband to return to India. By 2013, she was teaching at a preschool, and quickly realizing that she would never have the life she wanted for herself or her child if she stayed with her husband. In 2015, she was admitted to The College of Saint Rose. But she would have to make the difficult decision of leaving Akshita, who doesn’t see her father, in India.

“It was very, very, very hard, but only just one thing I thought: I need to give her a nice future. That’s the thing I put in my mind.” 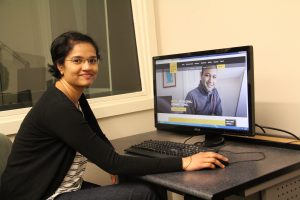 The first six months at Saint Rose were very difficult, she says. English is not her first language, and she couldn’t translate the material in her head fast enough to grasp it before her professors moved on to the next thing. She says she went to one of her computer professors, John Avitabile, and said she didn’t think she could handle the classes, even though she had only taken two courses her first semester at the advice of her brother, who works with computers in the United States. John promised her she’d get it in time, and he and the other faculty members provided her with extra help when she needed it. She used YouTube videos, tutoring, and the help of her friends’ children to improve her English. But she still longed to be there when Akshita went to school, when she fell down and scraped her knee, and when it was time to tuck her into bed at night.

“I literally cried many times. Why did I choose this life? Is this the right decision?”

John doesn’t remember seeing a struggling student. He sees an inspired international student, someone whose background in teaching suited her to work as a graduate assistant and help others and who was determined to succeed and make a better life for her child.

Today, Swathi hopes to find a job in the United States, perhaps as a Java developer, like so many of her family members. She expects Akshita will live in India for one more year, until Swathi gets settled and can earn enough money for them to live together. But when she says goodbye to Akshita after commencement, she won’t have to hear another “Do good, Mommy.” This next step in her life will be complete. She’ll stand on her own two legs and, at last and for good, beside her daughter.