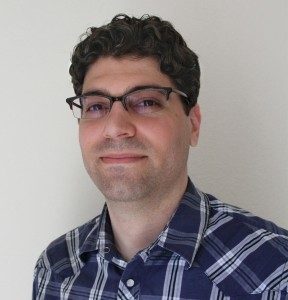 The thirsty giraffes in “Madagascar: Escape 2 Africa,” the terrifying but cute Toothless in “How to Train Your Dragon,” the maniacal villain-turned-hero in “MegaMind”…

Ron Pucherelli brought them to life as a member of the rarified team of animators at PDI DreamWorks. On these and other projects, he used his singular artistry to add the expressions and nuances that made the famous characters resonate with millions of moviegoers. Succeeding as an animator also has meant keeping up with fast-changing digital technology. And Pucherelli has used an almost supernatural tenacity.

It all started at Saint Rose. High school teachers who saw his talent recommended the College’s design program. Pucherelli immediately clicked with professors who taught the foundations of drawing, painting, design and color theory without which he could not have succeeded.

“They helped form the building blocks crucial to my development as an animator,” he said. “Design exists everywhere in filmmaking and interactive entertainment.”

To learn how to enter the field, he tracked down an artist behind Universal Studio’s “Spiderman” ride. That person recommended the prestigious Ringling College of Art and Design, where Pucherelli was admitted into the four-year computer animation program.

Even then, the competition to create the next “Nemo” or “Shrek” was too much. So Pucherelli studied more – with an Animation Mentor instructor who also supervised at DreamWorks. He invited Pucherelli to submit a demo reel, pronto. Pucherelli spent weeks on his creation – his chance at a job 1,000 or more people apply for.  It worked. Pucherelli soon found himself working on “Madagascar: Escape 2 Africa.” He remained at DreamWorks until the northern branch of the company (PDI) closed.

But Pucherelli, who met his wife, Arianna Squeo Pucherelli (now a senior designer with Oracle) at Saint Rose, has moved on to something a generation of teenagers would envy just as much: he joined Sony PlayStation to lend his experience with mythical dragons to the next “God of War” series for PlayStation 4.

Read more about the graphic design degree at Saint Rose.