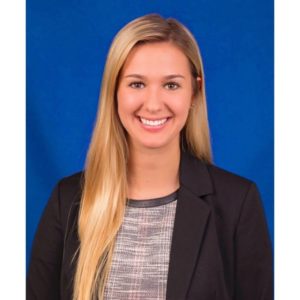 As an undergraduate business student at Saint Rose, Erin Felix dreamed of working at Madison Square Garden for the New York Knicks. Her path through college led her straight to her dream job right after graduation.

The Garden: Exactly Where She Wants to Be

Erin Felix ’16 spends a lot of time on the phone talking to New York Knicks fans about their mutual favorite subject: the Knicks. “Being a huge Knicks fan myself, I find it easy to relate to them and build relationships with them,” says Felix. “No matter who they are, I know that we have at least one thing in common, and that’s enjoying Madison Square Garden and watching the team.”

As an undergrad at Saint Rose studying Business Administration/Sports Management and Marketing, Felix dreamed of being at the Garden and working with the Knicks. Now she’s turned that dream into her career. As a client-relationship specialist with the MSG Company, Felix spends her day cultivating 500 Knicks season-ticket holders, who can be anyone from everyday basketball-loving families to Fortune 500 CEOs. “My work day typically revolves around building relationships with my clients so they happily come back year after year,” she says.

Her clients look forward to talking about their mutual passion during Felix’s weekly calls. “In these conversations, I find out about my clients’ family, work life, and wants and needs,” she explains. “I might suggest Knicks swag for their kid’s birthday, or a dinner on me for their anniversary. I can upgrade them for a once-in-a-lifetime experience in our courtside seats or invite them to meet-and-greets with the team. It’s all about just talking to and relating to them to make them feel part of the Knicks family.”

Her busiest time isn’t typically basketball season (October through June): It’s during the run-up to the next season. “During the summer, we’re working hard to sell new ticket plans that we offer,” says Felix. “Once the 2017-18 season is over, we are fully invested in trying to reach goals and budget for our 2018-19 season. Our off-season is definitely our busiest time!” When she’s not working with Knicks ticket holders, Felix is occupied selling suites, lounges, and tickets to various other MSG events and concerts.

An enthusiastic, skilled professional with energy to burn, Felix was hired by the MSG in June 2016, right after graduating from Saint Rose. She began as an account executive, handling ticket sales for the Westchester Knicks, the New York Knicks’ G-League (minor-league) team. “My job was to fill the building with season ticket holders, flex plan holders, and large groups,” she says. “I became the No. 1 seller on my team, had the biggest group sale in NBA G-League history, and was the No. 5 rookie seller in the whole league.” 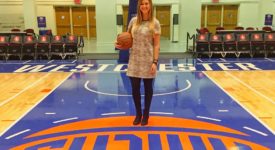 Driven Toward Her Goals

Herself a competitive athlete and former soccer player at Saint Rose, Felix attributes her amazing professional achievements to a combination of drive and focus. “I did well in my role by hustling hard every day and setting short-term goals to reach bigger goals,” she explains. “I wouldn’t leave the office without being the top hustler for the day. The more people you talked to, the more sales you made.” That unflagging drive and positive attitude accelerated her promotion to client-relationship specialist in January 2017.

“I think being an athlete all my life prepared me perfectly for my first role at MSG,” says Felix. It was her athletic prowess that initially attracted the attention of Saint Rose, where she was recruited to play soccer out of Mahopac, New York. On campus, she found the perfect home for her competitive, team-oriented spirit as well as for her business aspirations. “Not only did I play on the best women’s soccer team in the nation and meet the greatest friends I have, but I also started my working career,” she says.

Her Saint Rose experience, she adds, was key in her strategy to attain her career goals. Having set her longterm sights on working for MSG, Felix found her Saint Rose internship was the ideal springboard to that goal.

“I spent most of my junior year in the offices of Professor Hwang, Professor Dion, and Professor Cassidy-Dorion, picking their brains about how to secure my dream internship with the Times Union Center,” she says. “I believe this internship is what differentiated me from other applicants when I applied to my first role with MSG.” 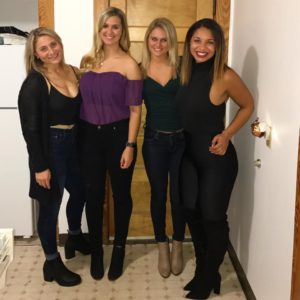 Felix appreciates the careful guidance she received from faculty, the Career Center, and the Huether School of Business internship coordinator. “They really helped me prepare, so that I knew exactly what to wear, how to answer common questions, how to present myself professionally, and so on,” she adds. “I still use some of those tips today, when meeting clients for first time.”

While at Saint Rose, Felix also enjoyed speaking with Professor Barry Hughes, another avid sports fan. “He was always so positive and supportive when it came to my soccer career, my internship, and my career goals,” says Felix. “He’s someone I credit a lot for helping me develop my confidence in myself and my career.”

Read more about the business administration degree at Saint Rose.