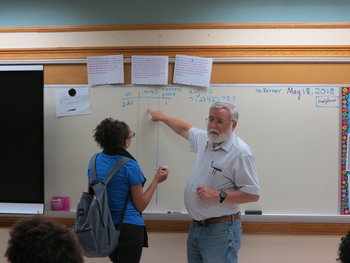 After a fulfilling career in teaching, Tom Kerner found new rewards in mastering and using an international method for teaching English as a second language. The work also brought him back to Vietnam, the place he had last visited as a soldier during the Vietnam War.

During his time at Saint Rose earning his B.S. in Special Education, Tom Kerner ’82 learned a valuable lesson. “You can’t just plunge into instruction,” says the Albany native, who retired in 2012 after 27 years of teaching in Massachusetts, New York, and Vermont public schools. “You have to know what your students’ performance levels are and what skills they bring to the task.”

About a dozen years ago, Kerner discovered a huge group of students who weren’t receiving that benefit. He learned about the issue during a trip to Cambodia, from a friend from Schenectady who was living there. While university students in Southeast Asia are required to be proficient in English, the vast majority are taught by native English speakers – expatriates from the United States and elsewhere – with no training as teachers.

“There’s no requirement of teaching expertise,” says Kerner. “I found they had no idea what to do other than follow the curriculum.”

Quickly spotting a niche for his skillset, Kerner eventually decided to specialize in a popular international measure of English-language proficiency: that old standby feared and tolerated by U.S. schoolchildren everywhere, the five-paragraph essay (FPE). The FPE is usually taught using academic terms like “central idea,” “thesis,” and “supporting statements” – an approach confusing to English-as-a-new-language students. “It’s a burdensome load of abstract information to impose on people struggling to learn English, for whom these are foreign concepts,” says Kerner.

In his own ESL classroom, Kerner had developed a jargon-free method for teaching the FPE: “You start by saying one thing about the topic. You give a reason why you say it. Then you give a second reason, and a third,” explains Kerner, who also devised a simple written template that students fill in and use to generate the essay. He has been presenting his method to overflow audiences at international English teachers’ conferences in Cambodia and Vietnam for several years now.

“You start where your students are,” says Kerner, adding that he’s used Charlie Chaplin films to teach ESL students. After having the class watch a few minutes of silent film, he’d have students describe what they’d seen Charlie do. “You build expressive language skills onto their own visual experience.” 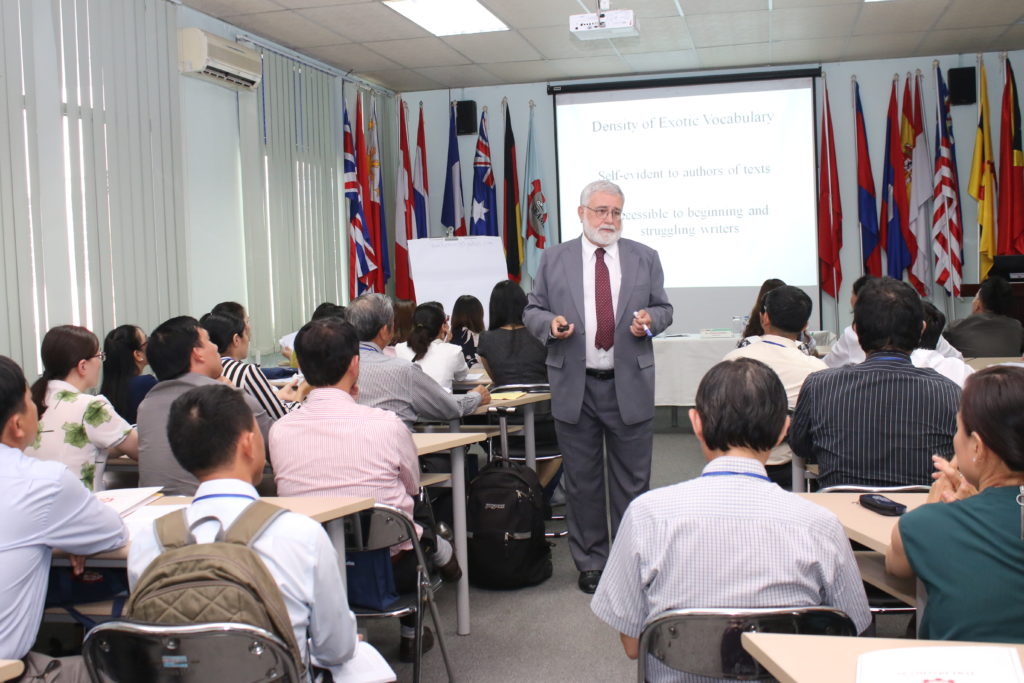 Kerner’s recent travels in Southeast Asia began in about 2006, with an invitation from an old Army buddy who’d been spending months at a time touring the region. “We traveled around Thailand, Myanmar, Cambodia, and Laos,” Kerner says. “Then I felt confident enough to go back on my own.”

After a few years, he ventured to Vietnam, a place that held deep personal significance. The last time Kerner had been in country was in 1970, when he had completed the last of three tours of duty as a U.S. soldier. He served as a Specialist-5 in the Army from 1966 to 1970.

Like many veterans of the Vietnam War, Kerner was deeply marked by the experience. For nearly two years, he lived in frequent danger: His team was tasked with spying on the North Vietnamese, deep inside North Vietnamese Army territory.

“I was in an aviation unit monitoring North Vietnamese military radio communications,” he explains. Initially assigned to Northern Vietnam during his first tour in June 1968, Kerner’s unit was reassigned to southeastern Laos in November 1968, when the U.S. halted bombing North Vietnam.

Before deploying, Kerner had gained fluency in North Vietnamese during a year at the Defense Language Institute in Ft. Bliss, Texas, where he was immersed in the language for 40 hours a week. He had joined the Army as a language specialist, preferring German or Russian, but wasn’t given a choice: He was to learn North Vietnamese.

Upon arrival, his language skills were tapped extensively, as his team spent 12- to 14-hour flights scanning the airwaves for North Vietnamese communications. They cranked the volume up and pressed the earphones to their ears to listen to the staticky transmissions over the deafening roar of the aircraft’s reciprocating engines.

“The flights took off about 2 p.m. and would come back around 3 or 4 the next morning,” says Kerner, who received 70 Air Medals for about 2,000 flight hours in the face of enemy anti-aircraft fire. “They were very exhausting. We were in an unpressurized airplane, so we were usually short of oxygen.”

On the ground, Kerner was stationed at the Naval Air Facility at Cam Ranh Bay, across the road from a Vietnamese fishing village. “It was in a fairly secure area, other than occasional rocket or mortar attacks at night,” he says.

Having top-secret security clearances, the team was allowed minimal contact with locals. “The government didn’t want us put in positions where we might blurt something out, or be captured and tortured,” says Kerner.

He shares a story of a fellow U.S. soldier who had sneaked out under the barbed wire to enjoy a beer at a local house of ill repute. The soldier, a member of the Oglala tribe (Sioux nation), was wearing civilian clothes. A young Vietnamese man came in and whispered to the proprietress, who turned to the soldier and cautioned, “Don’t say anything.”

“A minute later, two Viet Cong in black pajamas carrying AK-47s came in to collect taxes,” says Kerner. “They looked at him, looked away, and left. With his dark hair and skin, they mistook him for Vietnamese.” 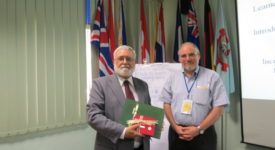 Finding a Calling, and Acceptance

The war left Kerner with little else besides undiagnosed post-traumatic stress disorder and disillusionment. “I had joined because I thought it was the right, helpful thing to do, but it became evident that we were accomplishing nothing except destruction and killing,” he says. “I became very mistrustful of the government, which was lying to the American public.”

Feeling directionless after being discharged, Kerner stumbled on his vocation through a temporary position at a developmental center. “I discovered that I really enjoyed teaching, and had a knack for it,” he says.

Flat broke, Kerner went to work for General Electric in Schenectady as a precision machinist, saving diligently and taking classes at local colleges.

He started looking for an undergraduate program in Special Education, a topic that resonated deeply with him. “I saw Special Ed as offering services to people in very, very great need of educational services,” he says.

Deciding that Saint Rose offered the most rigorous undergraduate program on the Eastern seaboard, Kerner transferred in his credits with the help of Sister Katherine Ryan. Graduating after three years to complete the core teaching curriculum, he began teaching full time in Massachusetts, later earning M.Ed. and Ed. S. degrees from the University of Massachusetts (Amherst).

It was at Saint Rose that Kerner learned to tailor his teaching to each student. He credits his Theories and Practices professor, Dr. C. Mildred Tashman, for this approach that helped him succeed in many ventures where other teachers had given up – whether helping community-college students struggling with basic math, or teaching slow learners to read.

Today, he continues to volunteer in the classroom of a former aide who is now a full-time Math/ESL teacher in the Springfield, Massachusetts, public schools. Kerner presents on the FPE at conferences for English teachers’ organizations in Massachusetts, Vietnam, and Cambodia, and spends many months per year traveling in Southeast Asia as a civilian tourist.

He was initially apprehensive about returning to Vietnam, the country he knew only as a soldier. The place has been forever changed by the “American War.” Every museum in the country, he says, includes exhibits about the war, and there are martyrs’ cemeteries to those killed in action or as collateral damage. “These are every place,” he says.

The people he meets are naturally curious about his fluency – and North Vietnamese accent. This inevitably leads to inquiries and Kerner’s admission to having been in the war. Initially braced for recrimination, however, Kerner has found acceptance. “I am astonished at the absence of animosity, even among the older people,” he says.

Rediscovering the country, he adds, has been a delight. “I find that every place you go, people are helpful and friendly,” he says. Venturing far into the countryside and mountains, he’s met people from an amazing number of cultures unknown to most native Vietnamese. “The Vietnamese government names 54 ethnic groups, each with its own tribal language,” he adds.

Throughout his career, whether helping struggling middle schoolers learn English or instructing teachers in the FPE, Kerner continues to follow the guiding light that first led him to Saint Rose. “I always wanted to do the most good for the most people,” he says. “I think, over the course of my career, that’s what I have done.”