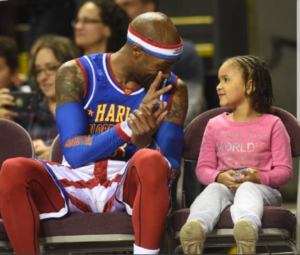 Tay Fisher, known worldwide as Firefly, the masterful 'four-point' shooter for the Harlem Globetrotters, quietly pursued a Saint Rose graduate degree in education. It wasn't easy, but he is now a Globetrotter and a Saint Rose alumnus.

The Quiet Side of Globetrotter #3

Ever since he started breaking basketball records at Kingston High School, Artavius “Tay” Fisher has been a public figure. By senior year, he was packing the school gym and was recognized in Sports Illustrated. Soon, his local celebrity was cemented by the hugely popular kids’ basketball camp he started.

Fisher’s fan base soon ballooned as a player for Siena College, where he was known for his ability to shoot from the arc, and became one of the most revered student athletes in college history. His following went international in 2009, when he joined the Harlem Globetrotters as Firefly, the lightning-fast guard who throws four pointers (a Globetrotters creation) from 30 feet as though flinging stones into a pond.

As he traveled the world scoring baskets off his back and leap frogging opponents’ shoulders, Fisher also doggedly pursued a master’s degree in Childhood Education at Saint Rose.

And while so much of his life was public, he told almost no one: Not his classmates, not his fellow Globetrotters, not even the kids he student-taught in Albany and Kingston.

“One of the kids once said ‘Mr. Fisher, do you know Tay Fisher?’ I said ‘He sounds pretty cool, I would like to meet him,’” recalls Fisher, who is 32. “I didn’t want the kids treating me different because I’m a Harlem Globetrotter.”

Fisher, who is on the road about 200 days a year as Firefly, is also a Saint Rose alumnus, having completed his master’s degree in 2016. While he has no immediate plans to leave the court for the classroom, his teaching degree is every bit as important as his more visible achievements.

Earning it meant quietly balancing a pro athlete’s grueling regimen with classes, exams, papers, classroom observation and student teaching. To keep up, he often wrote, read, and Skyped on the bus, in the air, in hotel rooms, before or after a day of travel, practice, games, autograph sessions and visits to hospitals or schools. And he did it over the course of eight years.

“I’ve been to 65 countries and I’ve probably studied in all of them,” Fisher joked, during a mid-morning phone interview from Michigan, where he’d arrived at 4 a.m. “There were times when I said ‘I can’t do this anymore.’ But sometimes when I was having a tough time I’d think of my campers and I’d stay strong for them.”

Thanks to his perseverance, and the fact that Saint Rose allowed him flexibility, the world has gained a gifted educator, say those who know Firefly as graduate student Tay Fisher. 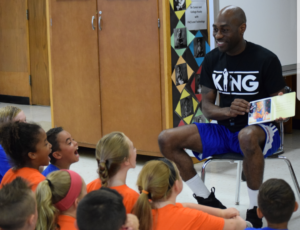 “Every time he’s been in the classroom the teachers would call and say how floored they are by how good he is with kids,” said Fisher’s advisor, Assistant Professor of Teacher Education Patricia Baldwin, who continues receiving texts from her former student, whether he is in Houston, Kingston or Tokyo.

Fisher’s desire to teach took shape as a teenager, even as he showed his gift for landing baskets from crazy distances. His parents, who didn’t complete high school, were dedicated to seeing him graduate and pursue college. But their neighborhood was rough and Fisher struggled in and out of the classroom.

He suspects he might not have advanced without the teachers, coaches, and Boys and Girls Club staff who saw to it he made good decisions. Fisher finished high school eager to both play basketball and support children. He lost no time; starting Tay Fisher’s Fundamental Basketball Camp.

“I was only 19, but I was already teaching kids through my camp,” said Fisher, who on top of everything else has led the camp ever since.

He arrived at Saint Rose in 2008, fresh from propelling the Saints to win the MAAC championship and postseason NCAA appearance to upset #4 seed Vanderbilt in the first round.

He chose elementary education, he says, because he wanted to have maximum impact on kids. He also pursued pro basketball, and in 2009, after his second try, the Globetrotters called. It was not in his DNA to quit school.

“I knew if I waited it might not happen,” he said. “I like the pressure. I feel I have more focus.”

And when he became a Globetrotter, Baldwin, Joseph Schaefer and Fisher’s other professors were ready to do their part. “They wanted it almost as much as I did,” he noted. “I wasn’t going to put them on hold.”

Because he traveled so often, the professors let him do some coursework on line – a challenge, he says, because he wasn’t always comfortable with the technology. They made themselves available by email. Saint Rose also let him spread out his classes; split student teaching over two semesters. They did it, as they’d do for other students in unique situations, because Fisher was so determined.

“He’d go on the road for two months, and I kept thinking ‘He’ll never come back,’” recalls Baldwin. “But he always did.

“Most young men would be wrapped up in traveling the world, meeting famous people,” she added. “But he was completely dedicated to getting the degree. He has this deep mission.”

Another thing she and colleagues did: respect his privacy. At 5-foot-9 (thus the name “Firefly,”) Fisher’s stature didn’t set him apart. He suspects some classmates who followed basketball recognized him, but they didn’t press. Conversations were largely limited to school work; professors were careful not to refer to his job. Mostly.

“I remember Trish (Baldwin) saying ‘I’d like to travel the world. Wouldn’t any of you?’ and she looked at me,” recalls Fisher, who has seen the Great Wall of China, the Great Sphinx, and performed for American troops in Afghanistan. “It was pretty funny.”

He remained anonymous, he said, because time was so limited; his need to focus absolute. On the road, where the Globetrotters play eight games a week, he was just as adamant that his teammates not know about his graduate studies.

There were, however, exceptions to his code of silence. Once, when a Saint Rose class met outside during a summer session, Baldwin prodded Fisher to spin a ball on his finger. Classmates were stunned. And the basketball has had its place in Tay Fisher’s classroom.

“When I observed at the Delaware Community School, I showed a few basketball tricks when we discussed Newton’s laws of gravity,” he recalled. “Some things you need to be able to see for yourself.”

As much as his story is unique, just as striking is how much he shares with those who aspire to teach. For example, Fisher says he is speaking up about his double life now as a lesson to children: Struggles can pay off. 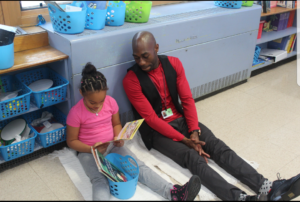 “Everyone wants to be Firefly,” he explained. “But they also have to be able to work hard like Tay Fisher.”

His lesson plans include the Globetrotters tickets he leaves for the kids he has worked with in school and camp. There are Black History Month essay contests around the legacy of Harriet Tubman and Malcolm X, reading lessons at the basketball camp, and visits to schools around the world.

“I’m just like other teachers who do it because they love it,” he said. “Maybe I’m not wearing the suit and tie to work, but I’m out there and I’m teaching.”

Read more about the childhood education degree at Saint Rose.