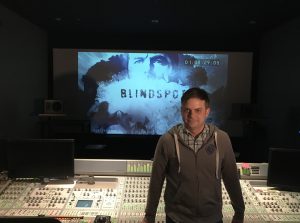 One morning, Mark Relyea checked his email and learned he had been nominated for an Emmy for an especially cacophonous scene in the celebrated TV series “CSI: NY.” The honor – the sound editor’s equivalent of a best actor nod – led him to buy his first tuxedo and walk the red carpet of the same theater where onstage celebrities would collect their Emmys a few days later.

Though he did not win, the nomination showed that Relyea had reached the upper ranks of the specialists who make sure a TV show or movie sounds as dramatic, sad or scary as it looks.

Since getting his start as an apprentice, Relyea has supervised sound on dozens of famous shows like “Gilmore Girls,” “Entourage” and “The Newsroom.” He has worked with the likes of Gary Sinise, Jane Fonda and Aaron Sorkin and twice won a coveted Golden Reel. Today, he can boast affiliation with one of the industry’s most famous brands, Warner Bros. Studios, which he will soon leave for the newly-formed Formosa Group.

Relyea said he found his niche not in Hollywood but at Saint Rose, where his professors encouraged him to pursue his passion for the technical side of stage, film and television.

“I wanted to be a moviemaker, and they modified my curriculum so that I could take all of the film, TV and broadcast writing courses in addition to my required courses,” he said.

His faculty mentors also lined up a crucial internship with Mountain View Group. “I got my first professional dose of the film business,” Relyea said. “It was a wonderful opportunity.”

As supervising sound editor, he helps “repair” sounds produced on set to make them clearer or more convincing. His group also creates sounds – chirping birds or gunshots – that cannot be captured on a set. One especially dramatic example is the Emmy-nominated “CSI: NY” scene he worked on, in which a convict with a vendetta shoots up a crime lab. Bullets explode and glass shatters artfully for many minutes.

“Once my teams assemble all their parts,” he said, “it’s a lot like making a huge painting with sound.”

Read more about the communications degree at Saint Rose.