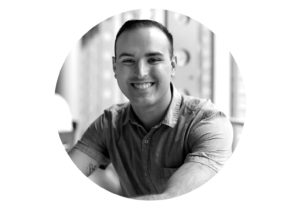 When he was a kid, Josh Terry's dream was to be Marine. Having served his country proudly, the graphic design graduate landed a dream career only five months after finishing his degree at Saint Rose – designing at T Brand Studio, a unit of The New York Times.

Only two years after graduating from Saint Rose, designer Josh Terry ’16 is deploying his visual-storytelling skills for one of the world’s most famous publications. Since October 2016, Terry has been a graphic designer at T Brand Studio, The New York Times’ internal brand-content and ad agency, working with top photographers, illustrators, and art directors to create ads for household names like Spotify and Mercedes-Benz.

“Soon after I started, one of my art directors asked me what my career goals were,” he says. “I told her, ‘Before working here, I would have said this. But now I’m here, so I have to reevaluate!’”

Right after graduating, Terry had signed on with Crye Precision, which makes high-tech gear for elite military forces. Himself a U.S. Marine Forces Reserve infantry rifleman, Terry expected the job to suit his combination of design talent and military experience, but found the fit wasn’t right.

Professor Ann Breaznell alerted him to the T Brand position, which creative director Alicia Hallett-Chan ’06 had posted on the Saint Rose Graphic Design Facebook page. Terry had heard Hallett-Chan (then at Sports Illustrated) speak at an alumni panel during his junior year. “I remembered listening to her and being inspired. I contacted her about this job. It snowballed from there,” says Terry. “One reason why Saint Rose is so great.” 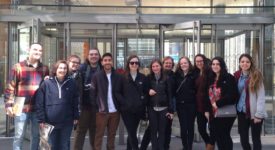 In his current position, Terry finds no end of intriguing creative challenges. He recently developed a webpage for Texas A&M University’s masters program in robotics. “I worked closely with the photo editor to tell the story in a visual way that made the robots interesting,” he says. His design combined glossy product-type photos of the robots with editorial photos of the classroom and the robot-testing site, Disaster City.

To advertise Focus Features’ film, “The Darkest Hour,” which chronicled Winston Churchill’s rise to British Prime Minister during World War II, Terry contracted a Danish illustrator whose work aligned with his vision of emulating World War II propaganda art. “The stuff from that period is beautiful,” he adds.
He chose to echo the movie’s narrative framework. “The movie is broken up into the days that led to Churchill taking over, so we took the same approach, through the lens of the Times’ front page,” he says. Readers view a documentary-type retelling of Churchill’s ascent, clicking on contemporaneous Times headlines to read the actual articles. “That was really fun to design,” says Terry.

Although he lives and breathes art and design, Terry originally came to Saint Rose for music. Terry followed a close friend who majored in Music Industry, and finished the entire first year but felt uninspired.

“I didn’t think I was good enough. I wasn’t passionate enough to be in an industry that you have to live and die for to succeed,” he says. “I was wondering, ‘What am I doing with my life?’”

So he joined the Marines – taking off a semester to sign up with the Corps as a reservist, and go through boot camp and School of Infantry training. 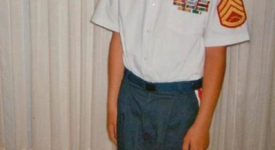 “My dream, ever since I was super super young, was to be a Marine – my mom even made a fake uniform for me,” he adds. The break from school seemed a good time to realize his lifelong dream, and address some things about himself that he wanted to change. “I wanted to serve. I wanted to fix a few things about myself and align my head with my goals and a mission.”

He returned to Saint Rose ready to start over – in graphic design. Terry had loved art classes in high school, and during his first year at Saint Rose, had enjoyed sitting in on a design class. When he found out that the Saint Rose graphic design program ranked among the country’s top programs, he transferred in.

“I completely fell in love with design – the culture, and what there was to learn,” says Terry, who appreciated the program’s technical rigor and emphasis on visual storytelling.

While going to school, he continued his Reserve service of one weekend per month and two weeks each summer – a schedule he’s continued since graduating from Saint Rose. Terry was never called to deploy – although he would have liked to, he feels that he has accomplished what he set out to do. He completes his service this year.

Staying true to his mission

Focusing on the number 22 (Terry cites a 2012 study that says 22 U.S. veterans take their lives daily), the book features Terry’s interviews with 22 veterans. He studied calligraphy “obsessively” for 22 hours per week, and built his own pens, to develop hand lettering that told each individual’s story.

“I learned so much about my brothers and sisters in arms,” he says. “There’s one Marine who writes poetry to cope with his PTSD, and I was the first person he ever showed his poetry to. The whole project was so emotional.” 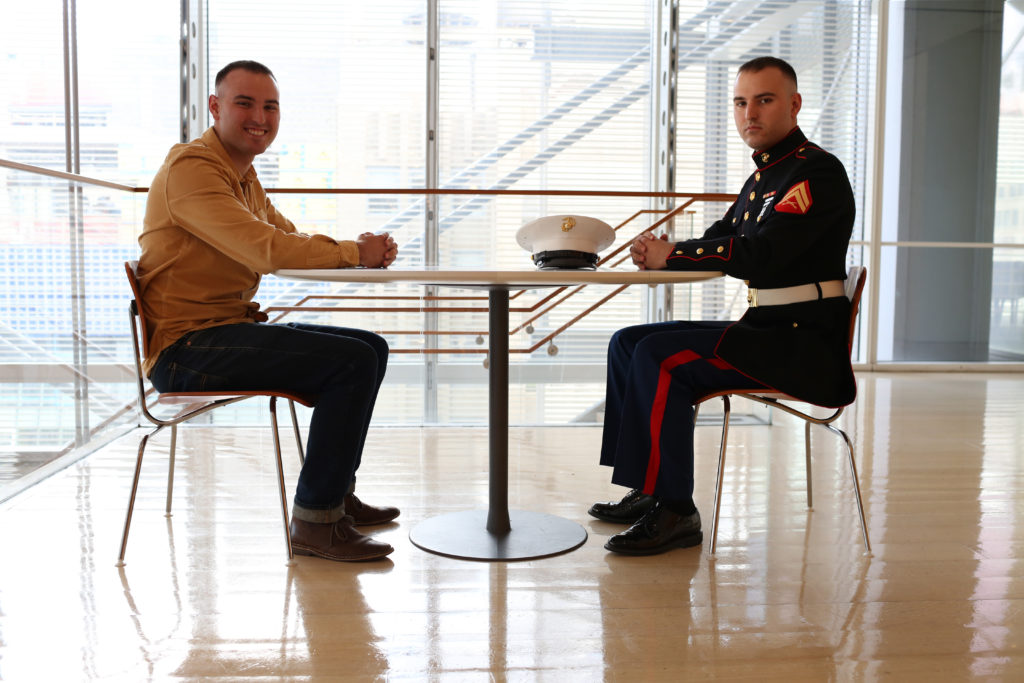 Point Man was also physically exhausting: Because of a misjudged deadline, Terry found he had to complete more than a dozen interviews in a few days. “It was crazy,” he says. “It was madness.”

Thanks at least in part to his Marine training, he found the discipline and focus to power through the project. “The military experience also helped me put things into perspective more easily, in terms of problem solving and looking at the reality to a situation, in work or life,” Terry says. “I also feel I’m more mission-oriented: Whatever it takes to accomplish that mission, I don’t let anything get in my way.”

Being a card-carrying member of the military as well as the design world, Terry adds, gives him a better understanding of both sides. “I can empathize with people better because of that,” he says. “It helps me speak to audiences with my work.”

He’s grateful for the experiences that led him to his present situation – even the initial misstep through music. “If I had followed that path, I would have been a pretty upset person, and not doing something as profound with my life,” he says. “After that first year of feeling like a failure, and rebooting myself during the Marine Corps, and the four years after that, it’s been really satisfying.”