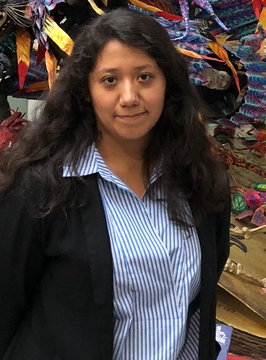 The daughter of Mexican immigrants, Guadalupe Chavez had always thought a lot about heritage. As a political science and history major at Saint Rose, she explored government and research.

Now a Fulbright Scholar in Mexico City, she combines all of those interests in her work, which looks at what happens when Mexicans come back to their native country as deportees or returnees.

Imagine suddenly finding yourself and your family in a country with a culture and language that you barely know. Imagine being a local government official trying to find homes, jobs, and schools for hundreds of families.

For thousands of Mexican nationals who have been deported or chosen to return to Mexico from the United States – and for the local communities that receive them – daily life can be a huge challenge. Some of the newcomers have been deported, while others return voluntarily, hoping for better educational and career opportunities or fearing eventual deportation; many have trouble acclimating. “Some of the returned and deported students have never even been in a Mexican school or university before,” points out Guadalupe Chavez ‘16. They often have trouble applying for identification documents, accessing job opportunities – while facing discrimination because of their “American” accents, she notes.

As a 2018-2019 Fulbright Scholar in Mexico City, Chavez works with Dr. Monica Jacobo, an expert in return migration and faculty member at the prestigious Centro de Investigación y Docencia Económica (CIDE). Chavez’s research explores two questions: What initiatives has the Mexican federal government implemented to support deportees and returnees? What kinds of organizations and social movements arise after deportation?

The answers to those questions are complex – nowhere as simple as, for example, throwing open the country’s borders and accepting all newcomers without exception.

“The Mexican government denounced Trump’s decision (rescinding the Deferred Action Childhood Arrivals) and announced that Mexico would receive dreamers who return to Mexico with open arms,” Chavez explains. “However, this excludes mothers, fathers, and grandparents who don’t identify as dreamers and who were deported before the Trump Administration.” 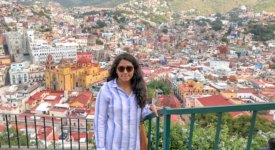 Studying many facets of a complicated issue

Chavez is one of a handful of outstanding young scholars chosen for the Fulbright Program, which is “designed to build lasting connections between the people of the United States and the people of other countries.”

It’s difficult to imagine someone better suited. Chavez developed the academic chops to become a researcher, first as a Saint Rose undergraduate majoring in history and political science, then as a graduate student at the New School for Social Research (New York, New York). In addition, she gained government experience from interning at the office of Sen. Charles Schumer, the U.S. Congress, and nongovernmental organizations such as the Center for Law and Justice (Albany, New York), and the Center for Migration Studies in New York City.

But perhaps even more relevant to her chosen line of research was her personal background. As the daughter of Mexican immigrants, Chavez had grown up thinking about the meaning of citizenship and nationality, how governments design and implement immigration policies, and, most importantly, how migrant communities mobilize demands within and outside of the U.S.

Thus, it seems completely logical that Chavez is now studying public, private, and nonprofit entities’ responses to the needs of the returnees and deportees. These range from initiatives from the federal government, to responses of individual townships and municipalities, to universities’ programs for addressing the topics of return and integration.

Chavez is also interviewing many grassroots organizations throughout Mexico, many founded by returnees and deportees.

“The purpose of these interviews is to learn more about the short- and long-term challenges that the deported and returned community experience, and how these organizations are addressing these challenges, especially with limited support from the Mexican federal government.”

Chavez is also volunteering at Otros Dreams en Acción (ODA), a grassroots organization that supports returnees, deportees, and migrants in Mexico and that mobilizes political action in Mexico and the U.S. 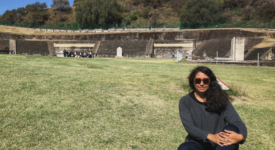 One huge gap that organizations like ODA address is the lack of psychological support for deportees and returnees. “The Mexican government really has no policy or even initiative for these people to access mental healthcare, and a lot of them really need it,” Chavez says. In her role as a volunteer as well as a researcher, she finds many people’s stories touching and compelling. “It’s a very powerful experience, speaking with them; a lot of them really open up and tell you very personal things,” she adds.

Although people have been repatriated to Mexico from the United States for years, with little guidance and resources, recent events have brought a new level of awareness and urgency.

“The Mexican government began implementing a lot of their political agenda to support Mexican dreamers but, again, these initiatives exclude people that do not identify as dreamers. Hence, the Mexican community is reproducing the same politics of exclusion which ironically is the framework of U.S immigration policies,” says Chavez.

In addition, existing federal initiatives face an uncertain future under President Andrés Manuel López Obrador (AMLO), who promised to create a “progressive and holistic social and economic development plan with the U.S and northern triangle countries to address the structural causes that force people to migrate.” However, it remains unclear how AMLO’s presidential administration will collaborate with civil society at the local, national, and transnational level, says Chavez.

Even in this early phase of her research, Chavez has already had a couple of surprises.

“For me, the most surprising thing was the lack of education within the wider Mexican civil society,” she says. “I feel that people are not aware of the number of people who are returning to Mexico or being deported.”

She was also startled by the divided response of resident Mexicans to the migrant “caravan” of Central Americans on their way to the U.S. border.

“Some people wanted to support these communities and didn’t want to treat them like Mexicans are treated in the United States, but other people were afraid that the migrants would destroy the country,” she explains. “The responses were very polarized.” 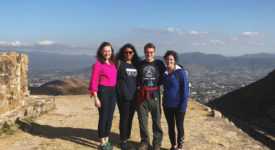 Educating the community – for years

Although the Fulbright award has brought her new recognition at the international level, Chavez has been educating others about the multifaceted processes of migration. During her time at Saint Rose, for example, she used classwork to help inform her classmates – many of whom had never traveled outside the United States – about the quandaries of migrants.

“Since migration is such an important topic for me, I tried to integrate it into my research,” says the Brooklyn-born Chavez.

Chavez credits Saint Rose particularly the political science and history department with developing a solid foundation for her research interests.

“Saint Rose gave me the flexibility to think critically about issues beyond the U.S. context, which really pushed me to think about other forms of migration, transit, and return,” she says. “In addition, it was at Saint Rose that I initially heard about the Fulbright. Claire Ziamandanis really motivated me to apply, although I waited until I had received my master’s degree to pursue the research grant.”

After finishing her Fulbright year, Chavez is hoping to publish an academic article and work more with institutions in Mexico and the United States, and then apply for a doctoral program. For the time being, she is enjoying her extended time in Mexico City, her mother’s hometown.

“I’ve never lived in Mexico for such a long time,” she says. “We used to come here for a week or two, but I’ve never been here working, volunteering at a nonprofit and speaking Spanish and interacting with people on a daily basis. I think that has been a crucial part of this experience.”