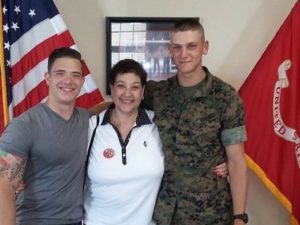 Cheryl Hage-Perez started at Saint Rose as a financially struggling single mom relying on public assistance. She says at Saint Rose she found people who met her where she was in life, enabling her to pursue her education despite the challenges. Today, Hage-Perez is a powerhouse nonprofit director who has rallied unprecedented funds and support for homeless veterans, finding a new way to give back for the help she once received.

In 2016, shortly after becoming executive director of the Veterans & Community Housing Coalition (VCHC) in Ballston Spa, New York, Cheryl Hage-Perez ’82 realized that she needed more funds to accomplish the VCHC’s goals of providing permanent and temporary housing, support services, and outreach and advocacy for homeless veterans and their families in seven New York counties. She hit upon the idea of hosting a gala that would not only raise funds, but honor local veterans.

The annual Veterans’ Ball has now raised more than $120,000 to support the VCHC’s numerous residences, programs, and services, and Hage-Perez was honored as a 2018 Woman of Distinction by New York State Senator George A. Amedore, Jr.

Each journey begins with a single step, and Hage-Perez’s journey to nonprofit leadership began long ago. “At a very young age, I found myself a single mom, a victim of domestic abuse, with no vehicle, making $7,200 a year. I relied on any assistance I could get: Section 8, food stamps, HEAP, Medicaid, WIC, anything to help me through,” she says.

“I had a front-row seat to the struggles of those in need of assistance,” she adds. “For so many, they could see no way out; and with the way they’re treated, you’d think they were taking money out of the workers’ pockets. 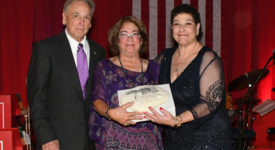 Hage-Perez began as a mental-health aide at St. Mary’s Hospital in her hometown of Amsterdam, but realized that she had to go to college to make more of a difference.

“As soon as I went to Saint Rose, I just felt it – the sense of family,” says Hage-Perez. “People I didn’t know – adults, teachers, kids – they were all so welcoming and friendly.”

Saint Rose offered the understanding community she sought, as well. “I knew I would get the attention I needed,” says Hage-Perez, who was working full time, had a 6-year-old son, and was pregnant with her daughter. “It was the best decision of my life.”

Unable to afford a babysitter, Hage-Perez would sometimes bring her son to class, where he would quietly sit and work in his coloring books.

Earning her bachelor’s degree in social work, Hage-Perez gained a strong academic education and vital interpersonal skills. Just as important was seeing how everyone was treated. “People were always treated with respect, whether they came from families of millionaires, or if they were like me, totally dependent on social services,” Hage-Perez says.

“It took me 10 years to finish my degree, attending part time – my stubbornness paid off! My dad was so supportive and wonderful. When I got my degree, he took it all over the city to show everyone. I graduated in January 1982, and he passed away in April that same year. I always thought, ‘He waited. Just waited.'” 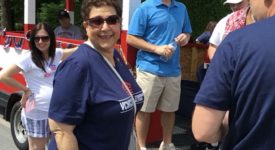 From early in her career, Hage-Perez wanted to attain a leadership position to help the largest number of people.

“I wanted to set policy and make decisions on direction,” she says. “I worked extra shifts, volunteered for extra assignments, read everything I could, asked lots of questions. It was a snowball effect. I started getting promotions. With each promotion, I felt I was in a better place to help.”

Then, she discovered her ultimate calling. “I kept seeing the words ‘homeless veteran.’ It baffled me – I didn’t understand how a veteran could be homeless,” says Hage-Perez. “The more I looked into it, the more I saw this was a big problem in our country.”

Even coming from a military family with three generations in military service, Hage-Perez was unaware of the many problems facing our veterans, from substance abuse to unemployment.

“They end up homeless. Often it breaks up their family, they wind up alone, and they don’t get their healthcare needs taken care of. And then we get them [at VCHC],” says Hage-Perez.

“We have a 100-percent success rate recognized by the VA,” she adds. “We have the only female program in New York State for transitional housing, of only seven in the country.”

Key to the VCHC’s success, she quickly adds, is the strong, unflagging support of the community – including weekly homecooked meals delivered by the Knights of Columbus; the Elks’ free dinners and breakfasts; Overpass America’s annual food drive; and many others’ donations of cash, house goods, clothing, and volunteer time.

A look forward – and back

Even as an influential community leader, Hage-Perez still finds the biggest challenge is being female. “At a development meeting, I might be the only woman in the room with the architects, engineers, and developers. There’s still a lot of room for growth for women.”

About her amazing ability to organize and fundraise, Hage-Perez says simply, “It’s not a job, it’s a passion. It’s something that comes from your heart when you’re sitting down with someone. It’s everything that you so believe in that it comes naturally.”

At the root of it all is her ability to relate personally to the people she’s working for. “I’ve been there. It was a part of my life, and it made me who I became,” she says. “You remember sitting in the social-service office and seeing how people were treated. Seeing little children with that blank look in their eyes. And thinking, ‘There must be more for them.’