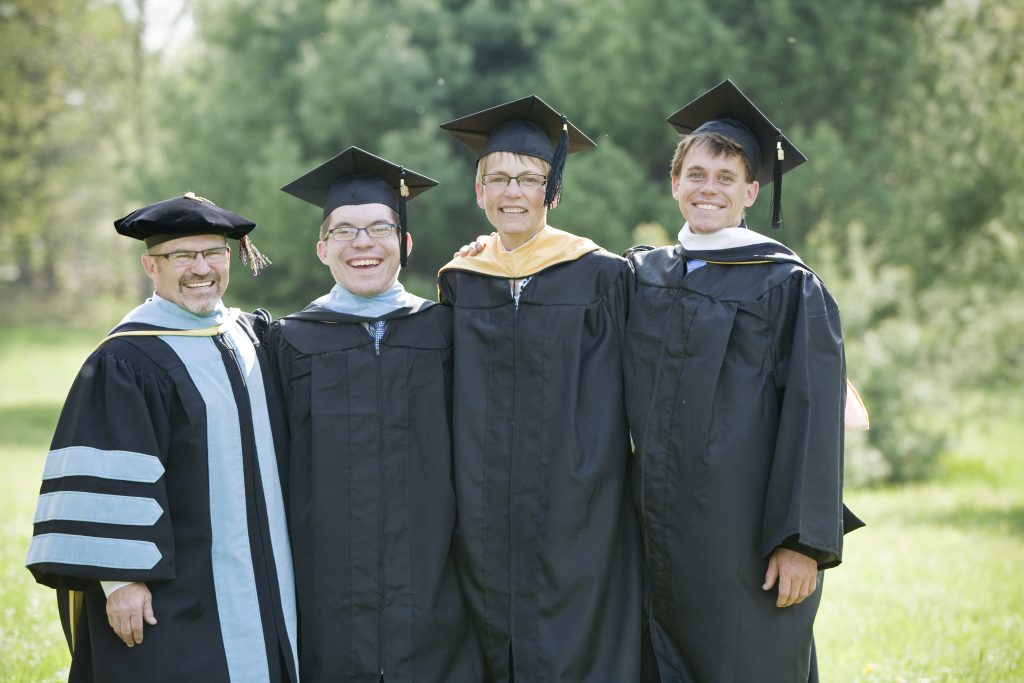 As a family, we are truly “gold-blooded.”

At Commencement 2009, we were all in cap and gown on the same day. I was in regalia as a professor, Laura (Annie) earned her graduate Education Administration certificate, Brandon earned his bachelor’s, and Nick earned his master’s. It was quite a family photo! President Sullivan put me on the stage (I sat right behind Jimmy Fallon at that graduation) so that I could hand out degrees to my family members.

In 2020, I was named Professor Emeritus, and I cried. I was so touched. Saint Rose is my family.

To me, the 100 years is so much bigger than just a marker. For me, it represents a century of values that we’ve been able to give to the world. I was so proud that for more than a quarter-century I was able to be on that campus every day and see it grow, but never lose its sight on what’s most important in life.

As far as the legacy we leave behind, I watched my program, counseling, grow from 30 students to 150. I still hear from students from over 25 years ago. I had the honor of watching people actually go out and change the world while also changing themselves into a positive force.

I was given the Friend of Education award from the New York School Administrators Association, and the New York Champion of Character award, for the work that all started at Saint Rose: publishing four books, speaking at over 100 conferences, and working with over 150 school districts to implement positive psychology, bullying prevention, violence prevention, and character education.

Nicholas worked harder than any of us, as he dealt with epilepsy as well as being legally blind. He was so proud to serve as a resident assistant on campus and graduate with his bachelor’s and master’s degrees. He took his skills to Apple, where he trained employees on how to work with people who had disabilities. Nicholas passed away at age 27 from an epileptic seizure.

Nicholas was named “Programmer of the Year” when he was a resident assistant on campus. As a family, we are honored to contribute proceeds from the sale of my books to his scholarship fund, the Nicholas Birchak-Strength of Character scholarship award, given annually to a student who is in Residence Life on campus.

On a personal note, I can’t begin to describe how important Saint Rose was in our lives. It went beyond just a job: I saw people’s lives change. I saw them become a better version of themselves, and I’ve never taken for granted what an honor that was. Every day, I know I’m a better person because of Saint Rose; we all are! 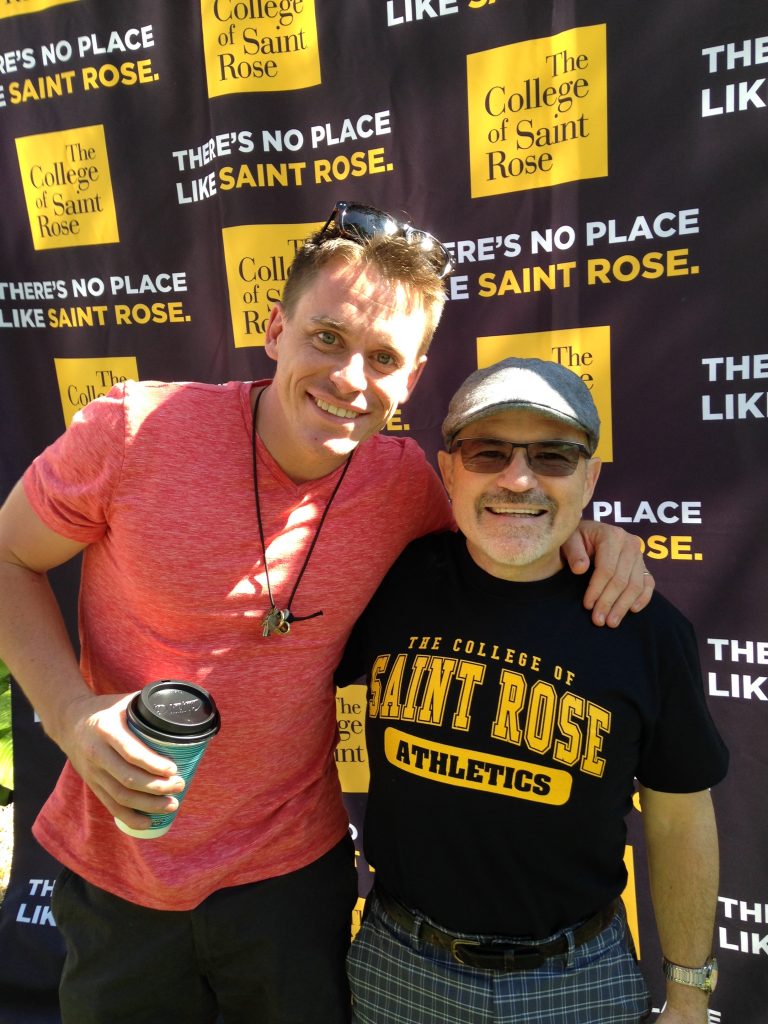 In the face of changing times, my hope for the future is that the College is able to maintain the same kind of community and small-scale mentorship and camaraderie that it has always had. I would hope it can maintain the fabric that makes it Saint Rose.

What made it unique and different was the level of intimacy among the faculty, administration, and students. President Sullivan was the backbone of our tightly woven community – the kind of leadership that knew every student by name. That was a hallmark of how the College was run.

When I was looking at colleges, I had a lot of scholarship offers from Division I schools, but I wanted something more intimate. And, as the College’s first national champion (https://gogoldenknights.com/news/2020/12/16/general-the-ne10-at-40-iconic-moments-birchak-becomes-first-golden-knights-student-athlete-to-capture-an-ncaa-championship.aspx), I had a lot of freedom. As an athlete, you have to have a very flexible schedule to train, travel, and compete. I got to train in the capacity that I wanted, and I felt very supported by the team. The student body supported me strongly. I was treated extraordinarily well by my peers.

My college life was the greatest. I lived with my brother on Madison Avenue. I’d have coffee with my father. I have the fondest memories of spending time with professors, like Barbara UngarUnger and Vaneeta Palecanda. We were a great support system for each other. That sense of community was unrivaled at any university I’ve ever seen.

The Saint Rose community was so accepting, and full of a rich humanity. It was a place where you really learned to be comfortable in your own skin. You didn’t feel a lot of weight in terms of what you were “supposed” to be. It was a freeing place for young academics. You weren’t saddled with preconceived notions of the career paths you had to take.

That’s what everyone from Saint Rose had. This great personal freedom afterwards that allowed you to explore yourself, and what you were capable of. It gave you lots of perspective, which is especially important in an aggressive industry like mine. You don’t get caught up in what’s not important.

I spent some time at a big university, and I noticed that their modus operandi was that, whatever you were getting your degree in, your path was clear cut. You could run an artificial intelligence program and predict what your life would be in five years.

Saint Rose gave you a broader reach – personally, socially, and community-wise. Look at me – I joined the circus!

As far as what my legacy at Saint Rose might be: I hope I brought some attention to the athletics program and helped remove obstacles for other athletes. It can be tougher, if you’re coming from a smaller school, to represent at the national level. I hope I helped open the door for other athletes to achieve at a higher level.