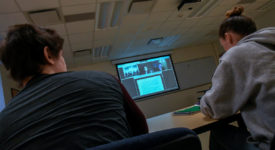 Every so often, a high-level executive speaks to a Saint Rose Computer Science class after responding to a rather significant cyberattack.

“These are top cybersecurity folks from financial institutions such as Citizens, or Verizon, or government,” noted Dr. Ian MacDonald, a Computer Science professor and the College’s Interim Dean of Mathematics and Sciences. “They give students an hour of their time every week. In an hour, they have big impact.”

The class, “Insider Threat,” invites industry experts to talk to students, via video conference, about the causes of large scale computer breaches and how they handle them.

The motivation for the class is an escalating security crisis without the workforce to effectively fight back. A 2015 Duke University/CFO Magazine survey found that more than 80 percent of American companies have been successfully hacked, leaving millions of consumers vulnerable to theft of their money and personal information. Even as companies develop tools and hire skilled employees, the federal government estimates that there are 350,000 openings in cybersecurity – a rate that is rising quickly every year. 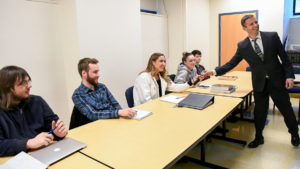 Professor Ian MacDonald, who also serves as interim dean of the School of Mathematics and Sciences, passes the microphone to students as they speak with people who work in cybersecurity. (Photo by Cindy Schultz)

MacDonald said the crisis stems in part from our overall dependence on technology and ignorance as to how it works. The lack of literacy makes it easy for computer-savvy “burglars” to prey on consumers, including corporations. In fact, companies are particularly vulnerable from within.

In the Insider Threat class, students don’t just hear industry experts discuss their experiences. Instead, they use the insider information and generally-accepted security standards to respond to hypothetical attacks, in the role of risk analyst, compliance analyst, information security officer, behavioral analyst, or cyber threat analyst – actual positions in cybersecurity that sound alike but perform distinct and critical roles.

“The compliance officer will ask ‘Have federal regulations been followed?’ The behavioral analyst may say ‘Did we do a good job of pre-screening job candidates? Are we asking the right questions?’” explained MacDonald, emcee of the weekly sessions.

The class next works in teams to write response documents, such as a debriefing to employees.

“And the corporate mentors give an honest critique – which can be brutally candid,” MacDonald said. “I tell people this class is not for people with thin skin. They work really hard, and we give them a lot of support. When you see their final presentations, you think you’re looking at a debriefing of Google’s cyberteam.”

Saint Rose is one of just three colleges to offer Insider Threat. The class, called a “menternship,” is sponsored by the Cyber Workforce Alliance (CWA), a consortium of corporations and colleges training specialists to detect and stop cybercrime. In addition to responding to mock attacks, students appear before still more industry experts at a regional showcase. They have opportunities to meet with mentors to discuss job opportunities.

Saint Rose junior Theodore Stabile, who took Insider Threat last spring, said the course was a wake-up call. He was surprised to discover low security standards and slapdash protocols at both large and small companies.

“Where I assumed arrogance was the culprit for so many attacks, the real criminal is ignorance,” noted Stabile, a Computer Science major who played a risk analyst (someone who understands computer networks) during the simulation.

MacDonald, who volunteers with CWA, notes that cybercrime, like a powerful disease, can strike on many fronts. So, halting or preventing it can involve personnel in many functions. As a result, the marketplace is rife with jobs.

And a growing number of Saint Rose graduates are entering the field. Marissa Salzone ’12, who majored in Communications, for example, is marketing director at GreyCastle Security. A growing company based in Troy, GreyCastle Security provides cybersecurity services.

“Because of the high demand, cybersecurity experts are constantly being recruited from competitors or other businesses,” said Salzone, who is frequently quoted on cybersecurity issues in the press.

MacDonald sees a great need in the industry for individuals like Salzone who specialize in less technical fields, such as public relations and crisis communications. He invites students of all majors to take Insider Threat. 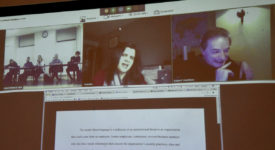 Professor Ian MacDonald, who also serves as interim dean of the School of Mathematics and Sciences, passes the microphone to students as they speak with people who work in cybersecurity. (Photo by Cindy Schultz)

Blake Vaisey, a Political Science major with a Computer Science minor, took the class last spring. He is considering going to law school.

“I’d like to take what I learned and use it to help protect companies I’m working for, not necessarily in the computer science field,” said Vaisey, a junior. “Law firms and government have computer systems, and making sure their information and assets are protected is important, just like it is for banks.”

Students in the class are asked to dress a little better than usual – no hoodies or baseball caps – and MacDonald instructs them to speak clearly as if interviewing for a job.

“This is about developing their soft skills, communication, working in teams, making clear and concise presentations,” he said. “Tech companies don’t care so much that you know particular programming language. They assume that. It’s your presence in the workplace they are looking at, and we want our students to be ready.”

To learn how to enroll in Insider Threat, please contact MacDonald at 518-458-5396 or macdonai@strose.edu