For many, Mock Trial Team serves as important step toward law school 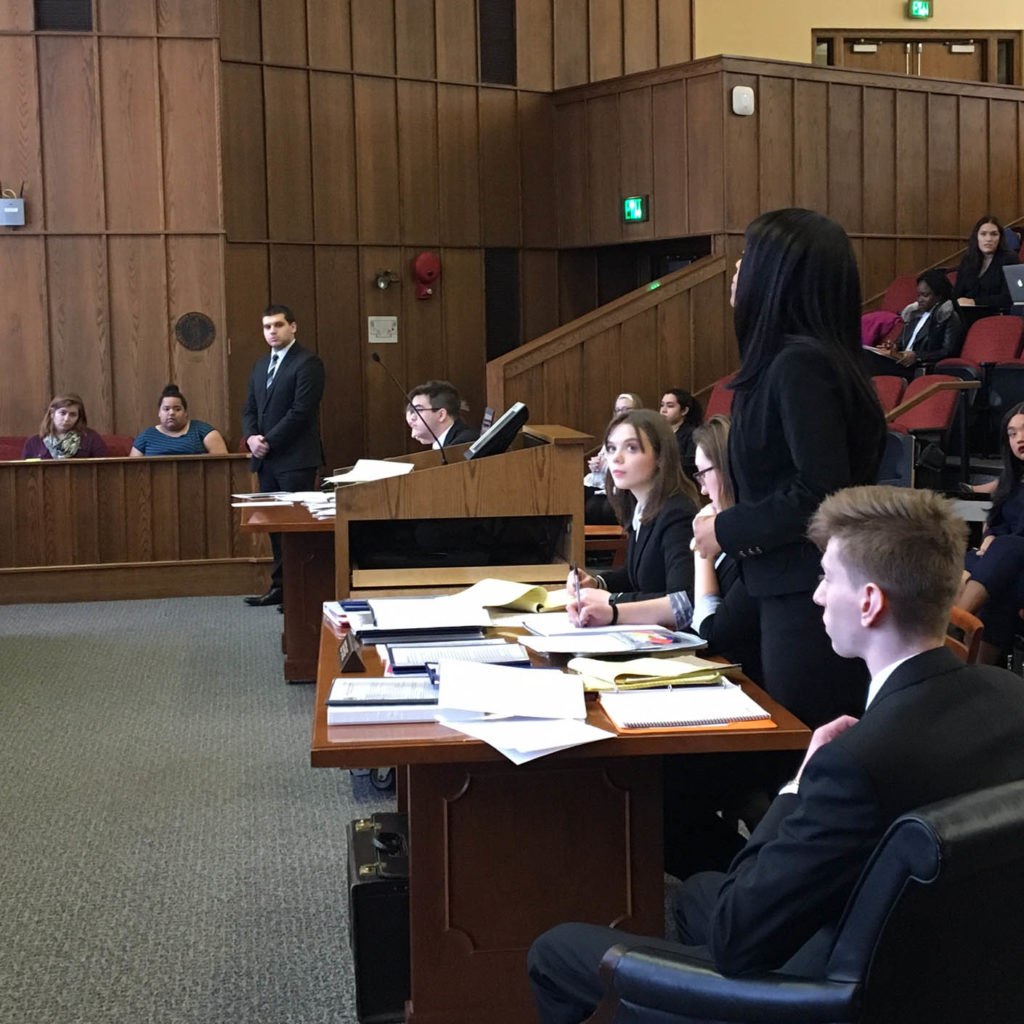 Students do not have to wait for experience in a courtroom setting, the Mock Trial Team at Saint Rose provides it.

The College of Saint Rose Mock Trial Team’s performances weren’t perfect at the Fourth Annual MLK Scrimmage hosted at Albany Law School. Opening statements weren’t flawless, an objection misfired here or there, and cross-examinations of key witnesses could have been better.

But the Saint Rose teams knew that. The chance to stumble was what they were after Saturday. That’s the whole point of scrimmages, where mock trial teams learn and grow from the mistakes they won’t make later when it counts.

“It’s a learning experience because we get our ballots back and we see the comments, and there’s everything from how you walked, your presence, what you wore, and other more important things, such as whether our objections were timely or not,” said Marys Christie ’19, a Political Science major and member of the Mock Trial Team.

Scrimmages like Saturday’s are precursors to fiercer and more competitive events like The American Mock Trial Association’s (AMTA) Regional and National Tournaments. At such competitions, Saint Rose students face Ivy League teams and are held to a much higher standard of judgment.

“It has been fabulously successful in that respect. All of our captains, from all of our teams, have gone onto law school.”
– Alfred Chapleau, a Saint Rose associate professor of Criminal Justice and Law and Pre-Law Advisor

This past year, Saint Rose competed in three invitationals — one at St. Bonaventure University, one at the United States Coastguard Academy, and one at the University of Rochester, placing second at the latter two competitions.

Preparing for national events is rigorous and time-consuming, but what students gain from participating in the College’s Mock Trial program is extraordinary. Not only does it help students build the confidence and skills they need to be successful in competition, but it prepares them for graduation, the rigors of law school, and beyond.

“It has been fabulously successful in that respect. All of our captains, from all of our teams, have gone onto law school,” said Alfred Chapleau, a Saint Rose assistant professor of Criminal Justice, Behavior, and Law and Pre-Law Advisor.

Marissa Schatzel ‘15 can attest to that fact. A former captain of the Mock Trial team, she said the team helped prepare her for the challenges she faces at Albany Law School, where she’s now in her third year as a student, but finds time to help coach her former Saint Rose team.

“Having that experience in undergrad really prepared me … to be able to answer a question in front of the professor, but also to compete in the moot court competitions that we have here and stand up in front of a real judge and real court in my internships,” said Schatzel, whose ultimate goal is to land a job as a courtroom attorney for criminal prosecution.

Chapleau said students work extremely hard leading up to the national competition. The AMTA each August delivers a case to all participating teams across the nation. To prepare, students are tasked with learning the case’s intricacies, must study court procedures and the rules of evidence, and have the ability to look and act the part of whomever they might play in the mock trials. 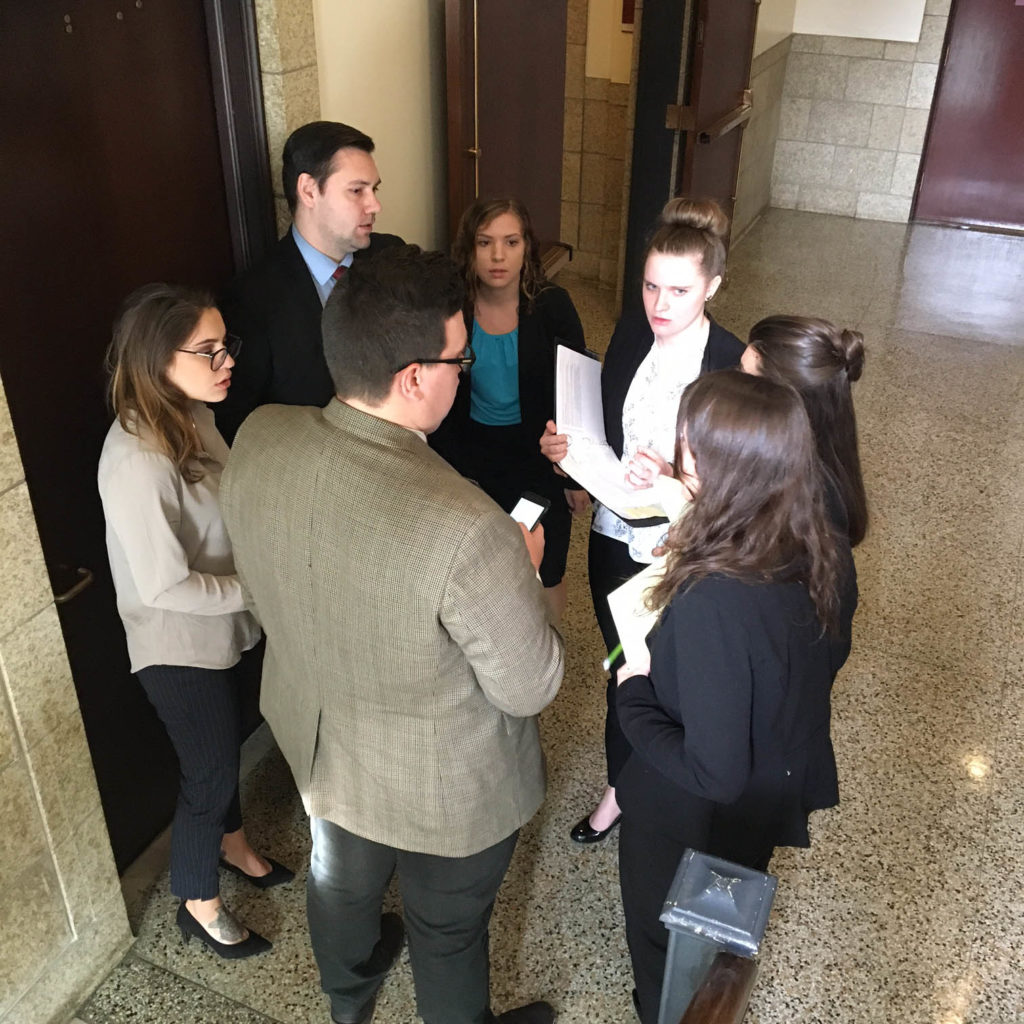 The Mock Trial Team has two teams within it: Team A and Team B.

Chapleau compared the national collegiate mock trial process to the NCAA basketball season. There’s an early season where students go to invitationals. Then, there’s an elimination round that starts in February, where teams meet from all over the country at regional sites. Winners at those competitions move onto the next level of competition.

“It’s been challenging at times, it’s been a lot of work, but you learn a lot of skills that really help you in life with public speaking, organizing, administrative tasks. It’s very beneficial,” Tom Conlon ’18, Political Science major and captain of the Mock Trial team said.

Conlon has participated in the Mock Trial program since he was a first-year student. He said he likes the challenge of thinking on his feet. He plans on attending law school after graduation and eventually running for political office.

The Saint Rose Mock Trial Team started five years ago and has since divided into two teams, Team A and Team B, to meet the growing needs of the program. The overall team is named after Hon. Loretta A. Preska ‘70, United States District Court Judge, alumna of Saint Rose, and benefactor of the team. The program is open to students of all majors, and encouraged for those planning to obtain a Juris Doctor degree.

“If the student is thinking about going on to law school, it’s highly valuable,” Chapleau said. “It’s part of their curriculum. They must do mock trial.”

However, he said, students graduating from the program go on to varying professions, such as mental health counseling, engineering, and chemistry.

“It’s a great skill for thinking on your feet, for logical reasoning, for good writing. It calls upon the students to exhibit a lot of skills that they have to use,” he said.

Christie isn’t sure what she wants to do after she graduates, but knows that being a part of the Mock Trial team is helping her prepare for her future. Christie said she is interested in either attending graduate school for public policy or law, and that her experience with the program has been great.

“There are so many different sides to mock trials,” she said. “There’s the excitement of getting a new case, there’s the pressure of learning a new case and mastering it — and it’s really exciting when we win. But ultimately, it’s a learning experience.”