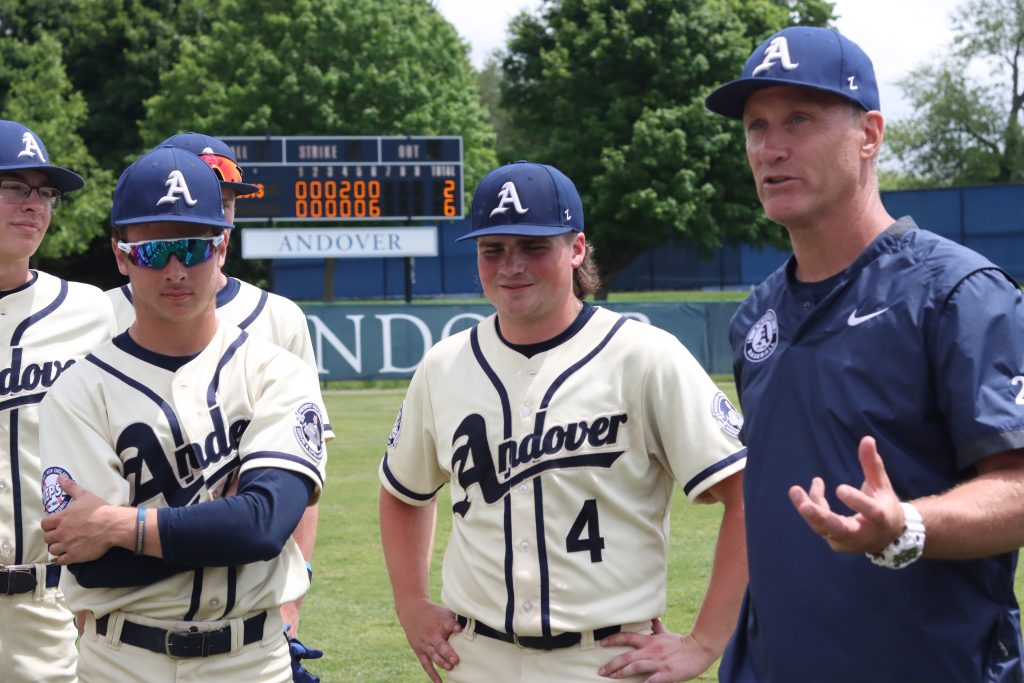 Kevin Graber with his team (Photo by Kelly Graber)

Since the time he was a Little Leaguer, Kevin Graber ’92 saw himself in Major League Baseball.

The former Saint Rose baseball standout coached at colleges and in pro leagues for much of his adulthood, chasing those baseball dreams.

After a long stretch of family sacrifices, like living in a dorm for two years at UMass Amherst with his wife Tina ’97 and three kids, Graber opted to shelve the thought of reaching The Show for a lifestyle more suitable for a married father of three. He’s spent the last 14 years at Phillips Academy Andover, a prep school in Massachusetts, 12 years of which he’s served as varsity baseball head coach while also working as senior associate director of admission.

But the kids grew up. Katie is 24 and has a life of her own in Florida. Kelly’s a student at Endicott College. And Kyle is off playing soccer for St. Lawrence University.

The dream? Still there.

Graber had made the most of his resume at Andover, leading the baseball program to five Central New England Prep Championships in 10 seasons, finishing the last four seasons ranked No. 1 in New England by the New England Baseball Journal Coaches Poll, and sending 64 players on to college baseball careers.

Next month, he’ll pack up and head to Mesa, Arizona, to become the complex coordinator for the Chicago Cubs. He’ll work with the team during spring training and serve as manager for the rookie-level Arizona Cubs.

Can you describe the role of complex coordinator for the Cubs?

My chief responsibilities are to schedule and communicate the year-round, day-to-day activities of the Cubs’ minor league spring training complex in Arizona. I collaborate with medical, strength, rehab, pitching, hitting, and facilities coordinators to ensure that productive days of instruction are executed throughout the year. And once spring training concludes, I serve as field manager (head coach) of the Arizona Cubs (the Cubs’ minor league affiliate in Mesa, Arizona).

How long have you dreamed of working for MLB?

I managed in pro baseball in the ’90s, first with the Southern Minnesota Stars of the Prairie League of Professional Baseball, and then with the Adirondack Lumberjacks on the Northeast League of Professional Baseball. I got out of pro ball after Tina (also once a student-athlete at Saint Rose) and I had our first child, Katie, because for me, the lifestyle simply wasn’t conducive to being a good parent. But I always felt I might circle back to pro baseball once our kids were older, if the opportunity presented itself. Lo and behold, here we are. Of course, MLB has always been the dream, from my days on the field at National Little League, all the way through my playing days at Saint Rose.

Was there ever a point where you thought it wasn’t going to happen, and you’d never get back to pro ball again?

When I made the decision to switch from coaching at the college level to coaching high school baseball, it did feel like a move further away from the pro game. But I was able to carve a niche presenting at coaches’ conventions, first regionally and then nationally, and I embraced social media as a means of sharing with the baseball world many of the drills and tutorials I’d become known for. I guess you could say I built a brand and gained notoriety and momentum because of it. And it didn’t hurt, winning a bunch of championships while sending dozens of players off to play major Division I college baseball here at Phillips Andover.

In January, you gave a baserunning presentation at the American Baseball Coaches Association national convention in Chicago. Did you go into that thinking it was a chance to be seen and fulfill your dream of coaching pro ball again? And that you’d get a call from the Cubs afterward to interview?

Presenting on the main stage at ABCA is an amazing opportunity – 8,000 coaches register to attend each year, and very few high school coaches are invited to present. It’s mostly pro and college coaches. If you show out on that main stage in front of all those coaches, it can be a life-changer.

When did your expertise in baserunning develop and how have you honed it over the years?

In 2014, we had a really talented team, but we were underperforming. I intuitively felt we could bridge the gap by running the bases more aggressively. I became obsessed with the topic and stumbled upon a book written by a former college coach named Mike Roberts, who’s known in baseball circles to be a baserunning guru. With Mike’s blessing, I borrowed his ideas and ran with them, developing my own drills and evolving my own philosophies, and it mushroomed from there. Soon we were winning championships, and I was presenting at coaches’ conventions and trending on social media. 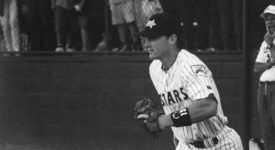 You’ve faced big odds before – battling cancer in your senior year at Saint Rose – did that play a part in your resilience chasing your baseball dreams?

My cancer diagnosis derailed my playing career, plain and simple. Ever since, I’ve had to fight for everything I’ve achieved in baseball. I’m not sure I’d go so far as to say I wouldn’t change a thing, but I do believe that nothing you achieve that’s worthwhile is ever easy. One thing that’s helped is I’ve never been shy about going where the opportunity is. I coached at Lassen College in Susanville, California; we spent two years at the University of West Alabama; I played and coached pro ball in Austin, Minnesota; my wife Tina and I and our three children spent two years living in a dorm at UMass Amherst; and I could go on and on. And next we’re headed to Arizona. I love Albany so much, but if I’d stayed there, I wouldn’t have the opportunity I have today with the Cubs. And none of this is possible without an amazing, supportive, and eternally patient partner like Tina.

We know the Saint Rose baseball alumni are close-knit. How many guys have reached out about the news?

I’ve heard from so many Saint Rose Baseball legends. Doug Kimbler ’98, Brian Zink ’92, and Jason Miller ’94, are among my favorite teammates and remain great friends today. The highlight, though, was a message I received from Michael Bellizzi ’13, G’17, the son of our late, great baseball coach at Saint Rose, Bob Bellizzi, who passed away in 2006 after a lengthy battle with leukemia. Michael wrote to me last week to say, simply, Coach Bellizzi would be so proud of you. I couldn’t help but get emotional reading that.

Coach Bellizzi was such a huge influence on you as a person and coach. What would he say about this news? What advice would he give you?

Coach Bellizzi was such a huge influence on me as a person and coach. The best thing I learned from Coach Bellizzi is that no one truly cares how much you know unless they know how much you care. Coach personified this, and it’s a mantra I take with me to the baseball field every day.