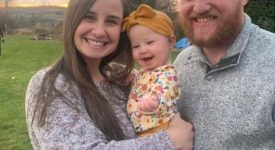 As a student, Justin Whittaker ’16, G’17 was everywhere on the Saint Rose campus, from the then-brand new seminar rooms of the Huether School of Business, to the main lounge in the Events and Athletics Center for a Student Association event, to the athletics fields as he coordinated equipment for Golden Knights teams.

He earned his bachelor’s degree in business with a sports management concentration and then an MBA. He was active in student events and policymaking all five years, serving as Student Association president for two. At Saint Rose, Whittaker also met his wife, Aideen Hanlon ’16, a communication sciences and disorders major. Today, they live in Weathersfield, Connecticut, with their daughter Gillian, born in May 2021.

Aideen Hanlon Whittaker is a speech pathologist at Glastonbury-East Hartford Magnet School, while Justin Whittaker is head equipment manager at Choate Rosemary Hall, in nearby Wallingford.

At age 28, he was elected president of the Saint Rose Alumni Association, a two-year term that started in June. Here, Whittaker discusses his education, the intricacies of athletic equipment, and a new start for the alumni association.

On how he came to Saint Rose: I grew up in Saugerties. I’m one of the few who can say they went to the same high school and same college as Jimmy Fallon. My wife and I go back and forth on this. She applied to like 14 different schools. I applied to two, got into both of them, and chose Saint Rose. I liked the small community feel we all love about Saint Rose, and it was relatively close.

The big kicker was that the Huether School of Business was just about to open. I did the tours and vividly remember hearing ‘We don’t even have the computers yet because we want to get the latest, top-of-the-line stuff.’ It was the revitalization of the business program that sparked my interest. And obviously, once I got there, I got involved in so many different things.

On shaving his head and other Student Association tasks: I started out freshman year as executive assistant to the Student Association. Then, there was an opening for director of academic activities. I did that, then became president from fall 2013 to spring 2015.

I don’t take all the credit but when we did the retreat to Silver Bay, the Fall Classic, it was the biggest it had been in terms of workshops and attendance. St. Baldrick’s Day had started the year before. I was chair for four years, with my wife for two of them. I shaved my head all four years. During one of our years we raised the most money for child cancer research in school history.

On the business side of student fun:  There were things about Student Association president that were tough. One was making sure student groups were supported fiscally and able to run the events they wanted to do.

There were definitely some hard conversations with groups who proposed events that didn’t fall into the scope of Saint Rose as a college and what would be beneficial to the student body. Certain events wouldn’t be a great use of our financial resources. And we were 18- to 21-year-olds making decisions about budgets of $150,000.

You’d have tough conversations with peers or even people older than you, then you’d have a class with that person. On the positive side, those interactions helped anyone on the Student Association executive board become leaders.

On working in sports, and management:  I love sports and always knew I wanted to work in a sports capacity. I definitely use what I learned at Saint Rose a lot. During Saint Rose, I worked in athletics as equipment coordinator, overseeing all equipment and uniforms.

Right after, in 2017, I had a chance to work in sports management at Choate Rosemary Hall. Today, I’m head equipment manager. I have two assistants and a sizable budget. We manage the equipment and uniforms for 80 teams in 24 programs and intramurals. I love learning about the sports.

With crew, rowing, it sounds so simple. Put the oar in the water and row, right? But there are so many little pieces of equipment teams need to be effective on the water, from radio machines in the boat to all different types of seats, paddles, etc.

You see your work displayed whenever our teams play. And I really enjoy working with students and being a part a small part of their journey. It’s similar to Saint Rose. You’re dealing with high school students potentially away from home for the first time.

On his Saint Rose roots: Four years ago the alumni association president JJ (James) Manley asked if I had any interest in serving on board of directors. I joined, and within a month, the treasurer position opened. I was treasurer for four years. This time around, I ran (unopposed) for president.

It’s all about giving back and serving the alumni. The school gave me so much personally and professionally.

On what’s next: It’s not the same Saint Rose as when I was there and never will be. What are we going to do to move forward and help those alumni from 20, 30, 40, 50 years ago stay involved in a school that might not seem like what it was when they were there? That’s one of the challenges and one of the opportunities. We don’t want the older alums not to be involved because of all the changes.

The education alums, even the music alums who might say they were stripped of their history, we could say ‘Hey this school still gave you a quality education in the music field you’re needed in.’ We want to tap into our athletics base. We have huge tradition; the women’s soccer team, men’s baseball, our basketball programs.

It’s all about getting alumni to be a part of the alumni association.

On how it’s not just about opening the checkbook (or Venmo app):  I think when alumni hear ‘alumni’ or ‘reunion’ they think it’s about money. If they get a phone call from the alumni office they think ‘They’re going to ask for money.’ We want to get the messaging out there that there are so many opportunities to give back.

We want people to come forward as mentors. We want to bring alumni back for a speakers’ series. The current alumni board’s goal is to work in partnership with the schools to make this happen. We know we have some tough conversations ahead. But whether you’re an alum from five to 10 years ago or 50, our goal is the same – to preserve the history of the College and help students prosper at Saint Rose.

To reach Whittaker with suggestions or get involved in the Alumni Association email him at whittakerj12@gmail.com. Need to update your alumni contact info? Fill out this form on our website.