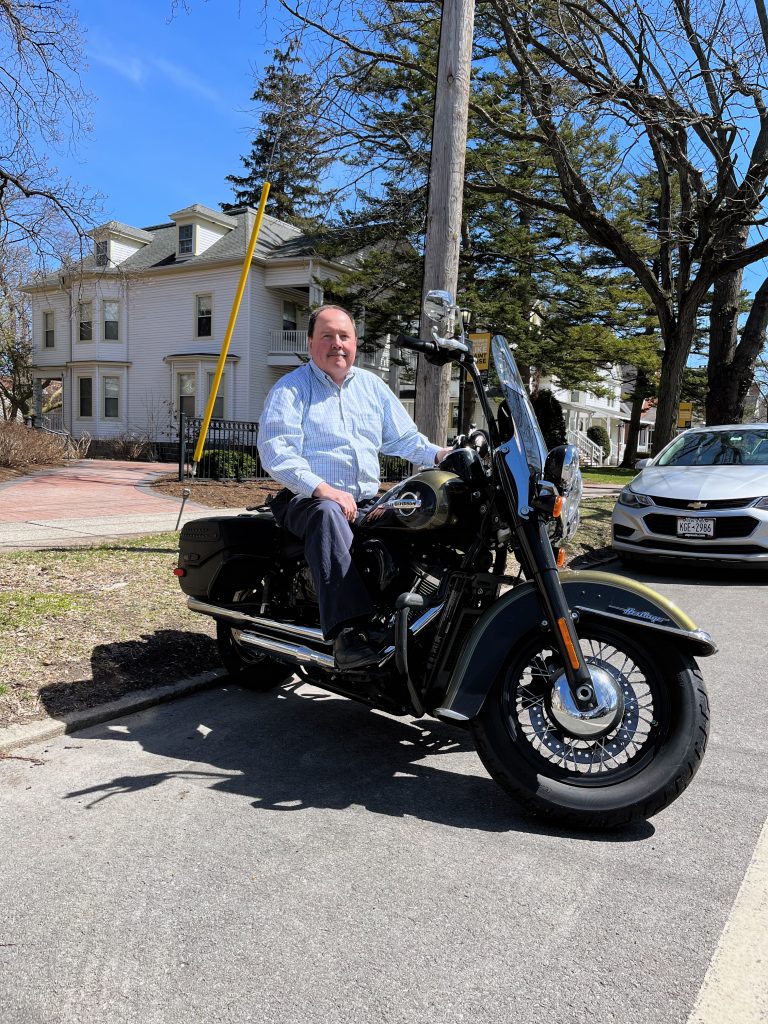 John Ellis with his Harley

From a tidy basement office, unadorned except for a whiteboard and snapshot of his granddaughter, John Ellis has long overseen all things technology at Saint Rose. His staff – programmers, network administrators, and the helpdesk team – manages the software, hardware, connections, ports, and passwords that make the campus run. They field inquiries when the technology is not functioning perfectly. There are upgrades and newer versions that will need to be done again in a few years. There was a pandemic that forced the campus to become a digital learning community. Now, there are phishing attempts and malware threats to handle.

“He never lets the stress of the job get the better of him,” said longtime colleague Shannon Crisafulli, assistant to the vice president for finance and administration. “He never hesitates to give credit to others but doesn’t expect it for himself.”

On April 29, Ellis retires as associate vice president for information technology, among the College’s most crucial, stressful, and least-visible jobs. In addition to his temperament, he is known for his willingness to jump in to different areas – and the gleaming Harley he parks on Madison Avenue just outside Saint Joseph Hall.

Ellis arrived at Saint Rose in 1989 as a graduate student. Since receiving his master’s degree in college student personnel (now higher education administration) he has designed and taught courses and headed many departments, even for a time, leading campus facilities, while running ITS.

Along the way, he delved into technology largely as a way to improve the other functions. Through the years his staff has moved the College from the era of floppy discs and Windows 2.0 to the Blackboard learning management system, smart classrooms, and an ever-growing network.

Here in the basement offices of Saint Joseph Hall are some of the most important Saint Rose employees nobody sees. How does IT manage the constant demands?

People get very upset whether their computer is not working or they think they have a virus or a cyber attack. I oversaw facilities for a while and it’s the same thing. You’re taken for granted as long as things are working. When the technology fails, it’s a disaster for folks.

Particularly faculty, when something is not working in the classroom, they lose their carefully developed lesson plan. And you have parents calling if their child’s wifi is out, and they pay good money to be here. As long as you actively listen and show that you care, situations de-escalate. I acknowledge what they’re saying and explain what we can do. I also follow up to make sure they are satisfied with the resolution.

When my folks get frustrated they’re allowed to come in, close the door and vent if they need to. They take a lot of lot of guff, and it’s understandable. But one thing I insist on is great customer service. They can’t let it affect our customers. 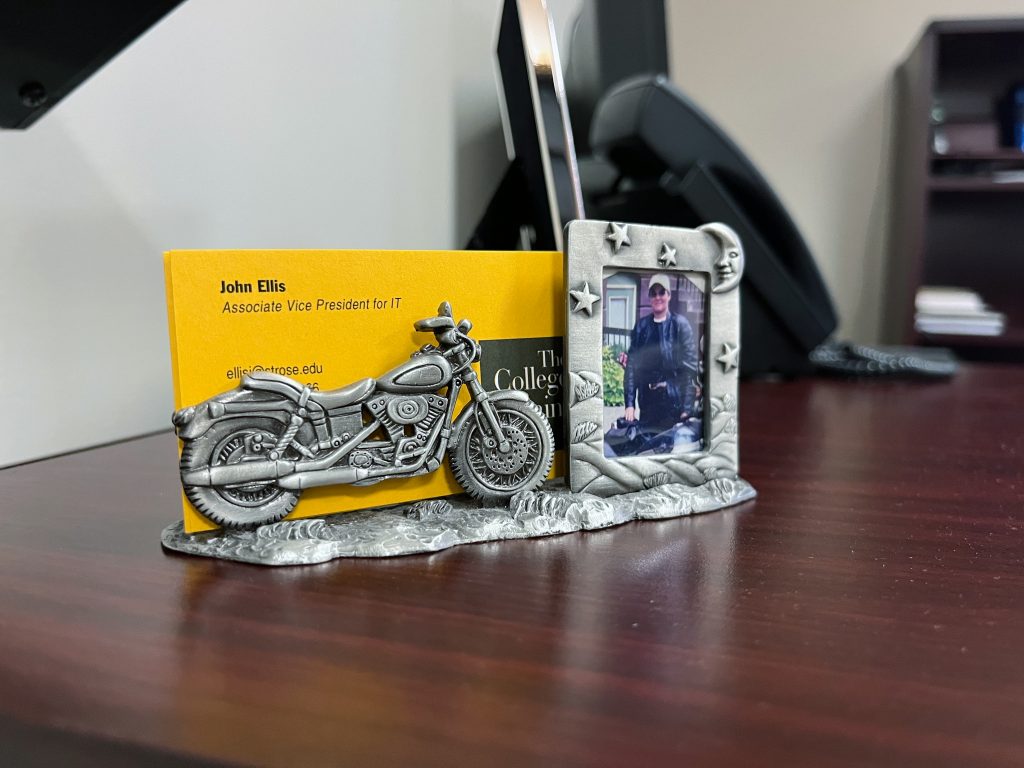 What tech advice do you give most often?

Sometimes we say “Have you restarted your computer?” They’ll think we’re being patronizing, but restarting the computer solves a lot of issues. It’s the same with me. I’ll be working with all kinds of programs and browser tabs open and my system will be really sluggish, and I realize I haven’t restarted the computer in a couple of days. I have to remind myself to practice what I preach.

Growing up the oldest of four, you took on some adult responsibilities when your father died. You’ve said this contributed to your calm demeanor. What else?

I used to be a prison guard. I went through the training academy at 21 and (first) got assigned to a prison in Fishkill. I remember they marched 80 of us into the exercise yard with hundreds of inmates. Here we were in our nice, clean uniforms and a few saw that we were vastly outnumbered and quit on the spot. We had large incidents, we had escapes. You’d be out on roadblocks and out looking for escaped inmates.

You had to be level-headed. There was an auditorium where we showed movies. I remember one time a fight started on one side. I was about ready to break it up and a more senior officer grabbed my arm and said “This is a distraction.” Then we saw several inmates moving in another part of the room. We evacuated them and found a couple of shivs. They were going to stab somebody while we were breaking up the fight.

How did an encounter with one inmate change everything?

In the same auditorium, one time an inmate was banging on the door to get in. I opened the door to let him know he couldn’t come in yet and wanted to calm him down. He grabbed me by the throat and lifted me with both hands and pinned me against the wall.

I used a wedge to break his hold and get him restrained. In doing this, I snapped my head back. Later, my neck really hurt, and I went to the hospital. The doctor said it could be a degenerative injury, and I had to leave the job. That was in 1987. To this day, I still go to the chiropractor for regular treatments.

Why did you come to Saint Rose?

While working in corrections, I earned my undergraduate degree (from Empire State College) in vocational education. I was teaching carpentry and other trades to inmates. I came to Saint Rose for my master’s degree so I could go back to corrections in administration.

I was 29, and a lot of my fellow graduate students were doing career changes like I was. It was a very active, engaged group of people – Lisa Thomson, Dennis McDonald, and Judi Kelly were part of this group.

When you started commuting from Hudson, so did your wife, Laurie ’91, G’95, G’98, now a longtime City School District of Albany teacher. How did you manage?

Laurie would go to Saint Rose during the day. She’d come home, leave the car running in the driveway and I’d hop in and drive back to Albany to take classes in the evening. It worked out.

So, you never returned to the corrections field. What happened?

A position opened up in career services. Mike D’Attilio, who was dean of students then, and one of my professors, encouraged me to apply. He was a great mentor. They also asked me to teach drug and alcohol abuse courses, which I did for 10 years for the school of education. I taught numerous courses over the years. I got involved in desktop publishing, databases, and simulation programming and traveled all over the country talking at conferences about how technology could be used.

You took over ITS and remained as digital technology became our preferred method of communication. So, you obviously love tech.

No. I don’t really like it that much. It’s a tool I use to get other things done. Most of my colleagues in IT, they’re brilliant. I muddle along. My biggest satisfaction over the years is in putting together an effective team of talented and dedicated people who have a passion for technology. I am quite proud of my ITS colleagues.

Whatever you do next, motorcycles will factor in. You grew up riding, got your wife Laurie interested, and have traveled 38 states together on Harleys. When did you realize your Harley was part of your Saint Rose identity?

There was a social event at former President (Mark) Sullivan’s house. Laurie and I rode in together on our Harleys. We were going to pull into the driveway and there was the president, arms crossed, and glaring. I thought “Oh boy he’s going to give us trouble,” because he felt no one on his cabinet should be doing something dangerous like riding a motorcycle.

But he pointed to the street and said, “I want you to park over there in front of the house. I want my neighbors to think I have cool friends.”