Every month, we find ourselves short on Class Notes from classes before the 1990s. We want to share all of our alumni’s accomplishments, but we don’t know what you’re up to if you don’t tell us. Please email us at alumni@strose.edu with your news, and write “class notes” in the subject line. 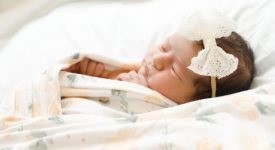 Congratulations to Katelyn Mockry Christiansen and her husband Kyle Christiansen on the birth of Madelyn Josephine!

Katelyn Mockry Christiansen ’08, G’10 and her husband Kyle Christiansen welcomed their daughter Madelyn Josephine to the world on Sunday, September 26. Mom (who just celebrated one year as chief financial officer at Murnane Building Contractors), Dad, and big sister Abigail are so in love!

Steve Dagostino ’08, a former men’s basketball standout, was honored at halftime during the October 26 men’s exhibition basketball game against Siena for his induction into the Northeast-10 Conference Hall of Fame. He’s only the third representative from Saint Rose to make the hall.

Diana Ostroff ’99 was featured in The Albany Business Review as one of the “Women Who Mean Business.” Ostroff is currently the managing director of Ostroff Associates with clients across the country.

Cynthia Beane Doran ’81, a retired Troy High School business teacher of over 30 years and former Hudson Valley Community College accounting adjunct, has been a Rensselaer County legislator since 2013 and deputy minority leader since 2018, proudly serving the residents of the City of Troy.

Cheryl Sager ’80 came out of retirement in 2020 to teach music at Kensington Elementary School in Kensington, New Hampshire. She has just completed her 6th CD, titled “Songs From the Heart,” which is dedicated to her mother who is dying of cancer. Sager also has a watercolor art show hanging at the Seacoast Artists Association in Exeter, New Hampshire, for the month of October.

The Honorable Elizabeth “Betty” O’Connor Little ’62 received the Bertrand H. Snell Award from Clarkson University. The award is Clarkson’s highest community service honor and was presented in recognition of her many years of service at the local level and in the New York State Assembly and Senate.