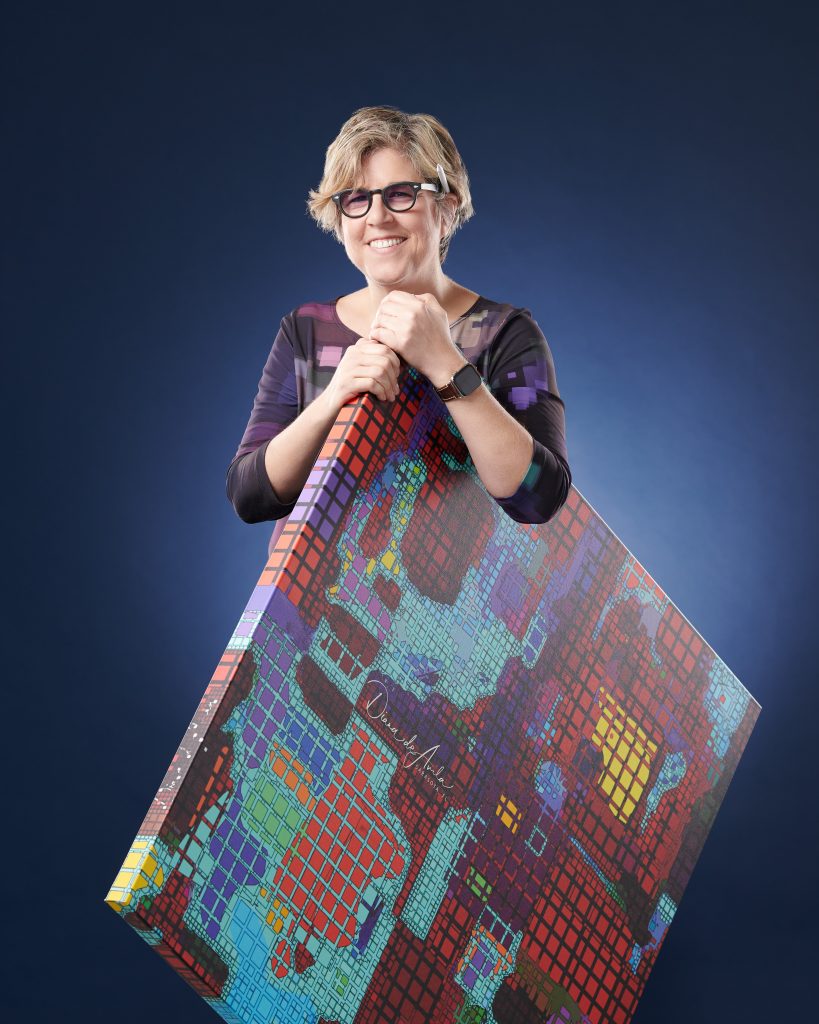 To say that Diana de Avila G’96 has an uncommon story would be a huge understatement. A prolific, passionate artist, she is driven to create computer artworks that are colorful, energetic, and in turns lighthearted and cerebral – “cosmic digital art rooted in fractal geometry, hovering at the intersection of technology and the natural world, where quantum physics, chaos theory, and divine order converge,” in her own words.

So far, de Avila has created more than 1,000 pieces in just four years since she acquired her artistic ability.

“Each day, I never know what I may create,” she says.

De Avila has Acquired Savant Syndrome, a rare condition in which a person suddenly has a remarkable talent – such as in music, art, mathematics, or language – following a traumatic brain injury (TBI). According to de Avila, only about 300 people in the world are known to have the syndrome. She also has synesthesia, a condition in which the senses are intermingled (such that one can hear scents or taste sounds, for example). Researchers hypothesize that the severe damage results in the brain rewiring itself in unconventional ways.

De Avila’s TBI originally occurred in 1984 in a terrible motorcycle crash, but the syndrome wasn’t triggered until 2017, when a severe relapse worsened her existing multiple sclerosis and deprived her of sight in one eye. At the same time, de Avila suddenly found herself experiencing colors and shapes in a totally new way. Her mind was filled with pictures that she wanted to express as works of art.

She refers to the event as her “manic moment.”

“The best way to explain it is that an undeniable compulsion came over me to get the sights and sounds in my head out of my head somehow—and since I had never drawn or painted (or wanted to), I went to the computer because that was a comfortable tool for me,” she says.

“However, I did not know any software and began to download it, without knowing how to use it—and in no time, without really learning it, I somehow could do it. Every day since I feel that same compulsion to use the computer as my canvas.”

These days, de Avila stays busy with a number of pursuits, both volunteer and entrepreneurial. But the lion’s share of her attention is taken up with art.

“The majority of the time you’ll find me at my computer responding to the colors and sounds in my head by giving them life on my digital screen,” she says.

A horrific crash and a promise to God

De Avila’s story leading up to the syndrome’s onset is in itself unusual. The Maryland native, who had joined the U.S. Army in 1983 immediately after graduating high school, was training to become a combat military police (MP) officer when that near-fatal motorcycle accident brought her Armed Forces career to a screeching halt.

The 19-year-old had suffered TBI and had post-traumatic amnesia and was hospitalized for nine months. Surgeries on her knees resulted in blood clots that threatened her life. Advised that she might have to have her leg amputated, de Avila promised God that, if He saved her leg, she would go into His service.

She joined the Daughters of Saint Paul in 1988, a worldwide order known for their prowess in multimedia communications, and later another religious community. She left religious life in 1995 and attended school full time, earning a bachelor’s degree in sociology at Rowan University in 1994 and a master’s degree in school psychology at Saint Rose in 1996.

“I had always benefited from a smaller school and smaller student-to-teacher ratio,” says de Avila. “I knew that Saint Rose had a very strong School of Education, and the religious affiliation appealed to me, having just returned to lay life from religious life.”

After earning her master’s, de Avila worked on a web-development team for Trans World Entertainment and taught at Saint Rose. She worked at GE Global Research as a web architect through 2005, when the stress of work proved too much for her declining health.

Even then, she stayed busy with many pursuits.

“I was a student, educator, EMT, entrepreneur, and web designer before my gift arrived,” says de Avila. In addition to exhibiting her works, she also does volunteer work for many organizations in Sarasota, Florida, where she lives with Cecilia, another Saint Rose alum and her spouse of 17 years. Most recently, de Avila coauthored “Soldier, Sister, Savant,” a memoir and art book.

A kaleidoscope of experiences

Although far from a straight-line progression, de Avila’s path has been rich with experiences that intermingle and inform each other.

“Even though I did not carry on in my major as a school psychologist, for instance, everything about my school experience added to larger career choices that fit my love of left-brained work, such as statistics,” she adds. “My belief is that you can learn from all education, and my studies in psychology involved statistics and research, which I love and use to this day, even in my art.”

The seven years as a Sister have affected her outlook and works, as well.

“In much of my art, people say they see a religious undertone, an ‘other-worldliness’ to it,” de Avila explains. “There’s also a playfulness to some pieces, and, above all, a wonder to the miracle that even I don’t fully understand! I believe that everything we experience in life affects who we are and what we do.”

Along with Acquired Savant Syndrome, de Avila discovered she had another rare gift: synesthesia, a condition in which the senses are intermixed.

“For example, I am always ‘hearing’ the colors in my head and ‘seeing’ sounds,” she says. “I’ve even discovered a new expression of synesthesia in me which is driven by touch and temperature and causes sounds – much like an orchestra of xylophones warming up for a concert.

“It’s a strange mix-up of my senses, but I’ve learned to relax more and move with them to create art,” she adds. “It’s a process and phenomenon that surprises me but spurs me on creatively every day.”