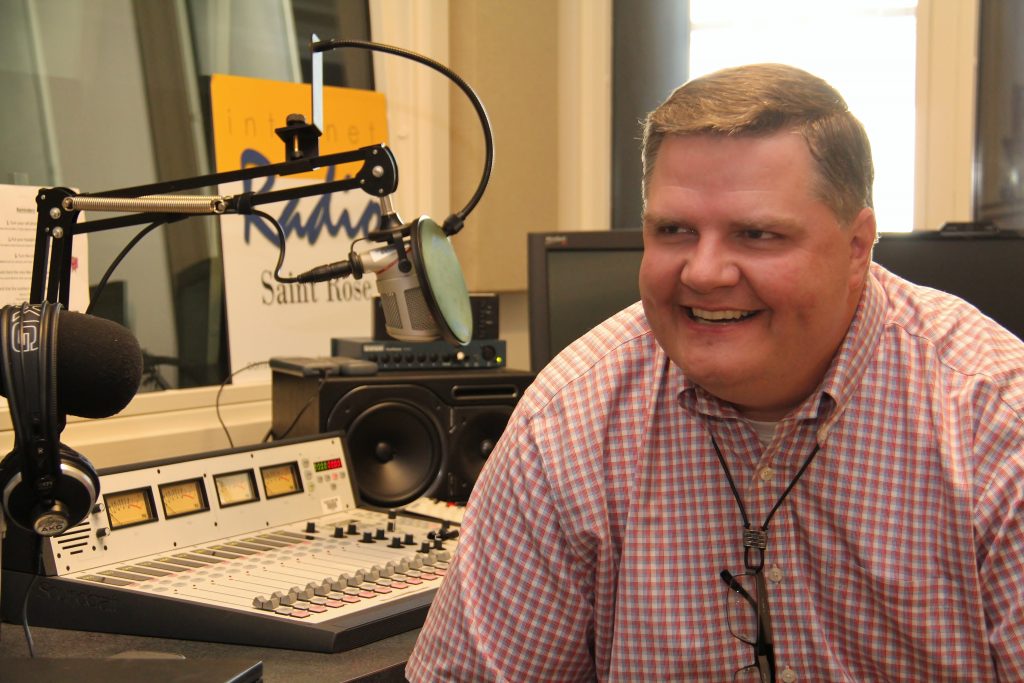 Joe Donahue isn’t one to brag. But if you ask if he’s interviewed a particular actor, newsmaker, or literary giant the answer is probably “yes.” In the WAMC Northeast Public Radio studio and at broadcast live events around the region, Donahue puts his stamp – a regular guy who knows a lot – on the meticulous conversations he facilitates.

On a typical day, Joe moves from recounting his weekend to interviewing a Steve Martin or a Stephen King. His guests on the “Roundtable” or “The Book Show” have also included seven U.S. presidents, five first ladies, His Holiness the Dalai Lama, Mikhail Gorbachev, Maya Angelou, Joan Rivers.

Joe interviewed a celebrity who died on air – Wolfman Jack, and interviewed another – Garrison Keillor – who insisted on remaining in the audience as he remained on stage. People say Joe sounds unflappable even when things go wrong. Only his producer and his wife Kelly can tell when he is experiencing a great deal of stress.

He says the ability to stay fresh, and seem calm, stems from doing hours and hours and hours of preparation. For Joe, that means taking in exhibits, films, and theater from Manhattan to his home in Washington County. And following the news. And reading, many books a week.

“If you have done your homework and know what you are getting into and what can transpire, you have confidence,” he said during an interview at the College radio studio in the Hearst Center of Communications and Interactive Media. “You know that anything can happen and you will be okay.”

He has been with WAMC since 1994 and is senior director of news and programming. Along the way, he has found time to teach broadcast to scores of Saint Rose students as an adjunct professor. He says his students’ enthusiasm keeps him hopeful for the future of media. Joe has also given a number of Saint Rose students internships and other support for their careers.

The Philadelphia native came to Saint Rose knowing he would be in radio. He had his first gig at age 10 and he arrived at college with a part-time job. His professors got it.

“Mary Alice Molgard, Fred Antico, Jeanine Pondozzi, and the late Bruce Harding, said, ‘We will help you any way we can,’” he noted. “They arranged for my job to count as an internship and integrated it into classroom assignments. “

By the time he graduated he was news director at a Glens Falls radio station. Three years later he was at WAMC.

“I had a drive, I had a stick-to-it-ive-ness and I wanted to learn. And no one discouraged me. It was ‘Joe, go off and do your thing. How can we make it better?”