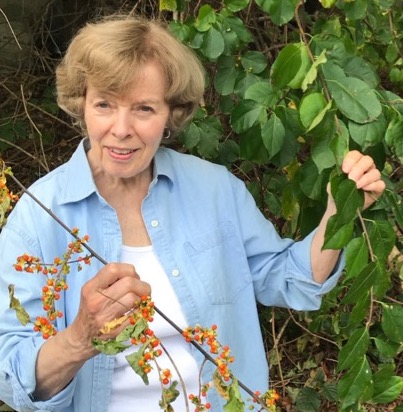 When her husband announced in 2013 that he wanted to retire, Ann Beberwyk Barry ’65, G’69 reluctantly agreed to retire with him. After nearly 30 years of exciting work at Pfizer Inc., where she had risen to become Executive Director of Worldwide Business Development, she was anxious.

A lifelong gardener, she decided to join the Master Gardener Volunteer (MGV) program with Cornell Cooperative Extension (CCE) in Rockland County, New York. That proved a nice segue into an action-packed retirement.

“As a Master Gardener, I’ve gotten involved with so many things: I give talks to the public at libraries, organize fundraising events, teach in the MGV program, and am a member of most committees including serving as vice president of the board of directors. If I’m not doing things for CCE, I’m working in my yard, which I love.”

Shortly thereafter, she found another important pursuit: surveying and monitoring for invasive plant species in conjunction with the New York State Department of Environmental Conservation’s Partnership for Regional Invasive Species Management (PRISM) program. She works directly with the New York-New Jersey Trail Conference, which coordinates many of the PRISM activities.

Her husband, Gerald (Jerry) Barry, joined her quest to monitor and survey for invasive species, and she recruited more and more Master Gardeners to do the same. She found herself leading groups and teaching others to identify and record the invasive plants and has become a renowned expert on the subject. The couple’s accomplishments were acknowledged via an “Extra Mile Award” from the New York-New Jersey Trail Conference.

“I wanted to continue to use my mind, continue to interact with people, and do something meaningful,” she says. “And what’s great is that my husband is my partner in all of this.”

A determination to educate herself

A passionate, lifelong advocate of education, Ann Barry gives Saint Rose much credit for her successful research and pharmaceutical career. But the unquenchable spark of intellectual curiosity and the perseverance to achieve her goals began with herself.

She grew up on a farm in Rensselaer County, New York, in a family that hewed to the old-fashioned belief that women should be homemakers, mothers, and nothing more.

“My father was a lifelong farmer who felt that women did not need an education,” she says.

She didn’t want to defy him but was determined to get an education.

“He was fine with my going to high school, but insisted that I be a secretarial major,” she says. She acquiesced and took the secretarial coursework.

“I’d start taking algebra in September: I’d read and study the entire textbook and take the Regents in January,” she explains. “In January, I’d start a new math or science course and finish that by May. Over the summer, I took language courses along with a summer job.”

Determined to attend college, she applied to Saint Rose, and she and her mother convinced her father to allow her to attend. He agreed on the condition that she major in education, with the plan of teaching elementary school.

“Saint Rose was the only place I applied,” she says. She commuted by bus each day.

She met her father’s conditions by entering as an education major and funding her tuition with summer jobs and scholarships. “Within a few weeks of starting at Saint Rose, I went and changed my major to chemistry since it was a better fit for me and my love of science,” she says.

She soon found mentorship and guidance with chemistry faculty John McGrath and Sister Mary Rehfuss ‘49, CSJ. “My sophomore year, I took organic chemistry with Sister Rehfuss, and she was a great teacher, an extremely caring woman, and a wonderful mentor who consistently encouraged me,” she says.

She graduated from Saint Rose in 1965 with her bachelor’s degree in chemistry, married in the fall of that year, and had two daughters over the next two years. Despite having two very young children,

“I entered the MS program at Saint Rose because I wanted to continue my education.”

Although her husband was supportive, her parents and other family members urged her to put her education in the background and focus on her home and children. Sister Rehfuss, however, encouraged her to continue to pursue her education, and repeatedly let her know that she could be a good wife and mother and still be an educated, productive woman with a career.

Sister Rehfuss then invited her to teach in the Saint Rose chemistry lab.

“That was life-changing for me,” she says. Even though she had taught science to junior high school students at the East Greenbush Central Schools for a year, the experience teaching college students transformed her from a relatively shy young woman into a more confident, knowledgeable leader.

She adds, “I don’t know what I would have done without Sister Rehfuss and her encouragement. She was my lifelong inspiration and altered the direction of my life.”

In 1969, Ann Barry received her MS from Saint Rose and her husband, Jerry Barry, completed his doctoral program at Albany Medical College. The family moved to the New York City metropolitan area for his National Institutes of Health (NIH) post-doctoral research fellowship at Cornell Medical School. She then continued teaching, first at a community college, then full-time at William Patterson College of New Jersey, followed by Lehman College of the City University of New York. None of these opportunities would have occurred without the background provided by Saint Rose. 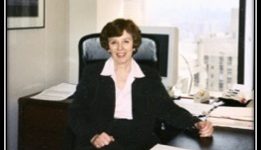 Ann Barry in her office

A brilliant Ph.D. defense and a move to Big Pharma

With her daughters getting older, Ann Barry felt it was now time to start a doctoral program, and she started her Ph.D. at St. John’s University in Queens, New York – first in biochemistry, then switching to cardiovascular physiology, her husband’s field. Again, there was the need to balance the hard work and demands of the doctoral program with the needs of the family. According to her, at the time of her defense of thesis, “The dean of arts and sciences said it was the best defense presentation he’d ever seen.”

Once again, she believes the educational and teaching experience had helped train her for that moment.

She was then awarded a National Institutes of Health (NIH) post-doctoral research fellowship in the Department of Cardiology at Albert Einstein College of Medicine. After three years of research in the heart failure area, she decided that, while the science was interesting, research was too solitary for her.

“I needed more interaction with people,” she explains.

That led to her next career move: pharmaceuticals. In 1987 she joined Pfizer Pharmaceuticals at their world headquarters in mid-town Manhattan, in the cardiovascular clinical group doing clinical trials and providing broad medical support for Pfizer’s European operations.

“I loved the challenge, the travel and interacting with people around the world,” she adds.

She was then promoted to the medical lead for Pfizer’s cardiovascular products in the United States, where she also became a primary liaison with a multitude of outside organizations, such as the NIH, American Heart Association, and American Society of Hypertension. The U.S. position also included a larger strategic role that involved extensive interactions with outside health insurers, the VA, etc., as well as a larger educational role with the field force and outside organizations.

“The educational background was so important for me at Pfizer – people saw me as an educator. Those skills go back to my Saint Rose training and my start as an instructor in the chemistry lab,” she adds.

After 14 years in the Pfizer cardiovascular clinical group, she was invited to join Pfizer’s Worldwide Business Development group, which was an opportunity to combine science with the business and among other duties, acquire outside compounds and companies for Pfizer’s portfolio.

“You have probably heard of Eliquis. It is an anticoagulant that was being developed by Bristol Myers Squibb (BMS). I remember calling Bristol Myers Squibb and asking if they would be willing to talk to Pfizer about potentially working together and sharing in the development and commercialization of the product. After a year of hard work, we completed a deal and Eliquis has become one of Pfizer’s biggest products.”

At her retirement party, Ann Barry received a special visit from the Pfizer CEO and a warm sendoff by Pfizer’s President of Pharmaceuticals, signifying the prominence she had attained in the organization.

It was a long journey for her from the farm to her office high up in the Pfizer tower in midtown Manhattan.

“I look back and say, ‘Saint Rose and Sister Rehfuss put me on the road to success and gave me the life I wanted,” she says. “I am sharing my life with a wonderful husband and partner. We have two terrific daughters who are well adjusted, happy professionals with careers in pharmaceuticals and families of their own. As I now look back, I can honestly say that I did everything I wanted to do in life. Thank you, Saint Rose.”