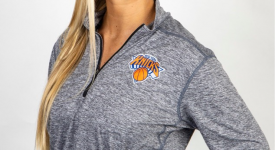 And this year marked one of the most exciting in recent years for the franchise, with the Knicks posting their first winning season and playoff appearance in nearly a decade.

What do you do in a typical day?

My job is to create meaningful relationships with Knicks Season Ticket Members to provide the best possible experience I can in hopes they will continue to renew their membership year after year. I spend my days talking to members via phone calls, emails, texts or in person – all about the Knicks, their experience, and how I can help create everlasting memories at the World’s Most Famous Arena.

What was this season with the Knicks like given that they made the playoffs and posted their first winning season since 2012-2013?

The Knicks this past season meant more to the city than I could have ever imagined. Being able to bring family, friends, and colleagues back together for the first time at a Knicks playoff game, after the devastating year New York had was something I will never forget.

I wasn’t sure what I wanted to do. I knew that sports was something I was interested in, as I was an athlete my entire life, but I wasn’t sure which avenue in the sports world I would fit in. After graduating from Saint Rose I applied to a number of different teams and positions and heard back from the sales department at MSG as they thought my resume made me a great candidate.

I was hired as an account executive with the Westchester Knicks with little knowledge of the sales world (this was before the sales program at Saint Rose was created!). I had some of the best training in the industry and quickly realized my passion for sales, which ultimately led me to succeeding in the role and being promoted to the New York Knicks.

How has your Saint Rose experience helped you?

It was at Saint Rose that I realized my passion for business. All of the courses I took, along with the help from my professors and advisors, played a role in where I am today. I had an extraordinary amount of guidance with creating my resume from my professors at that time. They also helped teach me how to shake a hand properly, how to dress for an interview, what to bring to interviews, the importance of your tone of voice and smiling, what questions to ask and so much more.

What do you do in your spare time, for fun?

I like to spend time with family and friends! I live in New York City with my boyfriend Dan and our two dogs, so any time not spent in the office you can find me outside surrounded by those I love. I play in a few soccer, flag football, and kickball leagues in the city as well!

What are three important things you’ve learned over the past year?

Family is everything. I’ve been extremely career-focused since graduating college, as I just want to be the best I can be, but have realized how precious life really is especially after this tough year. I’ve made sure to make time for family and friends and even take some days off to make memories of my own!

Don’t be afraid to be yourself! I find myself having the most successful conversations with clients and colleagues when I am being 100% authentically myself. This is something I’ve realized recently as my confidence has grown over my time working. I am not the smartest person in the room, don’t have the greatest vocabulary, and don’t pretend to either! I am passionate about sports, relationships, and the New York Knicks, and that is what you’ll get when talking to me.

It’s okay to fail. Failure is the greatest teacher, especially in the sales industry. This past year has been filled with “fails” as the entertainment industry was completely destroyed by the pandemic. How do you sell a team that is not playing in front of fans? We failed and learned, and failed and learned some more, then developed new sales tactics, and now are stronger than ever.