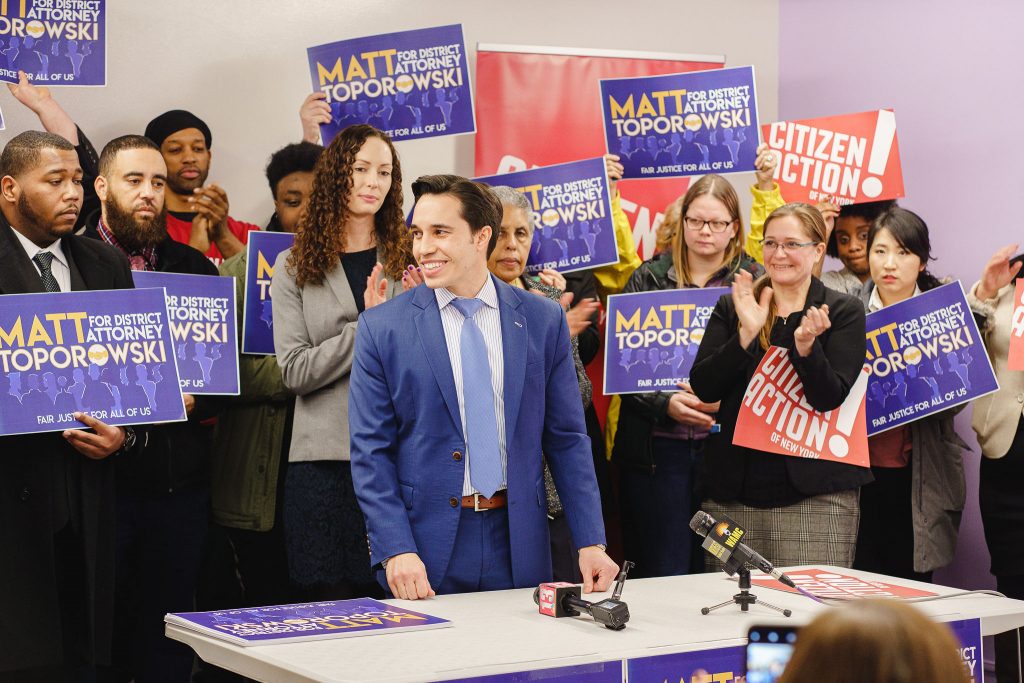 Barely a month into his new position as senior assistant corporation counsel for the City of Albany, Matt Toporowski ’08 is hard at work on projects focused on police reform and accountability and community relations.

In projects involving police discipline and arbitration, he works with lawyers and the command staff at the internal affairs bureau of the Albany Police Department. One recent project, for example, concerns an officer who made a racist comment on duty and on camera that became highly publicized.

In the other part of his project portfolio, Toporowski is working on several community projects, such as an “expungement clinic” – a one-stop-shop to help people clear their records of minor violations and convictions. “The clinic will help people expunge convictions and seal their records for low-level misdemeanors and minor violations, so they can apply for jobs and residences,” he says.

Bringing together local resources and legal guidance, as well as assistance with public records, the clinic could also partner with representatives from local courts.

“We’ve never had an expungement clinic here in Albany, but other municipalities, like Buffalo and Salt Lake City, have had a lot of success with this,” Toporowski says.

The success of such clinics, he adds, is contingent on building community relationships. And that’s an area in which he has a lot of experience.

After earning his JD from New York Law School in 2011, Toporowski went on to amass a strong resume of legal work, starting with clerking for the Third Judicial Department of the Appellate Division of the New York State Supreme Court, then nearly three years as an assistant district attorney for Albany County, followed by several years of private practice in New York City and Albany.

But it was his campaign for Albany County district attorney (for which he employed Saint Rose interns) that Toporowski counts as his most transformational experience.

“That campaign, from January through June 2020, was what really sparked my passion for criminal justice reform,” he says.

He found himself working nonstop.

“Campaigning isn’t easy. You start at 9 in the morning, and you keep going until 9 at night – seven days a week.”

He says it was the hardest thing he’d ever done. “But it was fulfilling. I was talking to people, experts, in the community every day, about how to make the criminal justice system better.”

Toporowski, who ran on a progressive platform that heavily advocated criminal-justice reform, lost the primary election to the moderate incumbent. But he gained invaluable experience and built strong relationships with community leaders.

“Those are my greatest assets now,” he says. “I have my ear to the ground, and I’m in a position to help make change happen.”

And he brought his progressive attitude to the City of Albany.

“It’s challenging, having worked with the progressive movement and activists, and now being in the mayor’s administration,” he says. “But I hope to be a bridge and accomplish within government what people are calling for in the streets. I’m here because I believe our mayor shares in my progressive values and is committed to reform and reinvesting in communities that have been overlooked. It’s an exciting place to be, with dedicated people all around.”

Making the transition from private practice to civil service has meant some changes.

“Now, I’m not thinking about billing hours; I’m putting effort into what I care about, and it’s very fulfilling,” Toporowski says.

A deep-rooted passion for giving voice to the underprivileged

He traces his progressive roots back to Saint Rose, where he earned a BA in History/Political Science with a philosophy minor, and with faculty who opened his eyes to the plight of the underprivileged.

“We read about unionizing, labor, capitalism, and that was what set me off on this progressive path,” he says, naming Carl Swidorski, Angela Ledford, and Benjamin Clansy among his inspirations. “These teachers had a profound effect on how my politics ended up becoming rooted in progressivism. It’s about focusing on people who have been overlooked, marginalized – the working class, immigrants, refugees, Black and Brown people.”

Philosophy professor Jeanne Wiley was a big inspiration, too.

“I took her class freshman year and enjoyed it so much that I became a philosophy minor,” he says, adding that studying philosophy helped him develop critical-thinking skills and a sense of perspective. “Learning to think outside the box has been helpful to me as an attorney, as well.”

The Saugerties native says that he found subtle hints pointing him toward Saint Rose from an early age. As a child, he had become aware of Saint Rose through his family’s frequent visits to his grandparents’ home in Schenectady. Later, when he visited a family friend who was attending Saint Rose, he was attracted by the low student-faculty ratio and felt at home on campus.

Outside of his studies, Toporowski enjoyed life at Saint Rose. He lived in Lima Hall the first year that men were allowed.

“I met some of my best friends there – to this day, my best friends are a group of Saint Rose students who all lived in Lima Hall. We all hung out in one person’s dorm room the whole year.”

Even after they graduated, the group remained tight.

“We lived in a house together: two teachers, one lawyer, one police officer, and one financial planner – all Saint Rose grads living around the corner from the campus, young professionals living together,” says Toporowski. “It was a great time.”