Jennifer Scamell G’21 has become the new technology and innovation director for New Hyde Park-Garden City Park (Long Island, New York). She was previously district technology integration specialist. She has worked for the district since 1998.

Jackson Murphy ’19 and his firm, Lights Camera Jackson Productions, are involved in a new television series, “Everybody’s A Critic,” that’s described as “part roundtable debate show, part game show, part reviews show, and – all Movies!” In Murphy’s partnership venture with Chaz Ebert, publisher of RogerEbert.com, the show will feature a diverse, rotating panel of film critics who discuss new blockbuster releases as well as indie gems. The critics will also be competing for honors and prizes of cash donations to their favorite charities.

Brian Graham G’18 is a human resources intern at NSF International in Ann Arbor, Michigan, and is earning his master’s degree in human resources and labor relations at Michigan State University.

Christopher J. Hartigan G’16 has been appointed principal of Stratford Elementary School in Garden City, New York. He was previously assistant principal at Stratford. Before that, he taught at PS253Q in Far Rockaway, Queens, New York. 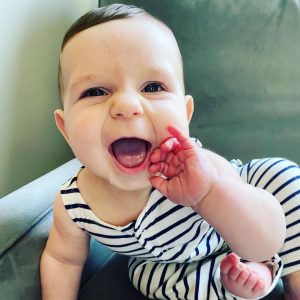 Kelly Ann Osorio G’13 has become director of financial services for Berkshire Community College’s new position to Berkshire Community College (Pittsfield, Massachusetts). She was most recently director of financial aid at East Stroudsburg University in Pennsylvania. She has been in higher education for 12 years, and started her career at Saint Rose.

Michael Pomarico ’12 was 2019 Employee of the Year for the Mint Hill Police Department in Mint Hill, North Carolina. Officer Pomarico has been with the department for six years and in the K-9 program for three years.

Katie Gabriel ’06 was one of the artists who painted fiberglass cow statues for the New York State Fair. The cows are traveling across the state to raise awareness of all things dairy before being displayed at the State Fair. Currently an art teacher at Fayetteville-Manlius High School, Gabriel teaches painting and drawing, as well as advanced art. Her family descended directly from the Everingham family of Lafayette, a dairy-farming family that dates to before the Revolutionary War. Gabriel used exclusively New York State-manufactured materials in her decoration of the cow statue.

Franco Pacheco ’06 is director of communications for Community Partnership for Youth in Seaside, California.

Krista May ’03 has become director of strategic marketing and communications for the Connecticut Sun.

William Male ’02 was promoted to deputy chief of the Rotterdam Police Department (Rotterdam, New York). He was previously a lieutenant in the department. Male has been with the department since 2006.

Megan-Claire Chase ’99 was featured in an article from the V Foundation on the need for health equity in cancer care. The feature was based on her own experience, as a now 5 year cancer survivor. To read the article, click here.

Gretchen Guenther-Collins ’99, G’99 has been promoted to the position of shareholder for Teal, Becker & Chiaramonte, CPAs. She has been with the firm since 2000. She is also the treasurer of the board of directors of the Albany Damien Center and a member of the Saint Rose Golden Knights Athletic Advisory Council.

Sarah Robinson ’99 has been promoted to the position of shareholder for Teal, Becker & Chiaramonte, CPAs. She is on the board of directors for the Ronald McDonald House Charities.

Nikki (Radens) Arel ’96 has been inducted into the Phi Alpha Honor Society, which honors social work students. Once COVID shut down Nikki’s massage business indefinitely (now reopened), she started her Master of Social Work degree through Walden University’s asynchronous online degree program, something she has been considering for a few years. With the goal of a certificate in military social work, she currently has a field placement at Veterans Base Camp in Chaplin, Connecticut.

Sanjay Shrestha ’97 was featured in an article in the Albany Business Review. His unconventional career path began with a job as a senior research analyst covering the clean-technology sector, with a focus on fuel cells. He recently became chief strategy officer at Plug Power in Albany.