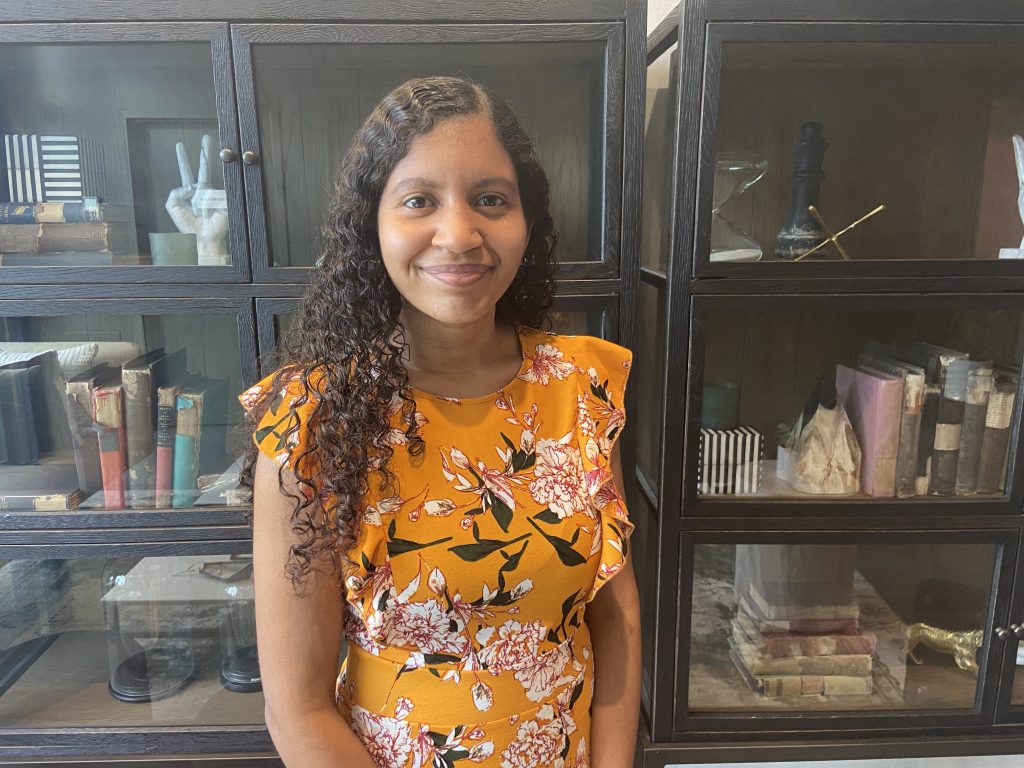 When Rhina Allende ’18 switched from New York City public school to prep school in bucolic Massachusetts, the contrast was jarring.

“You go to a private school and all these people have experienced all these things,” recalled Allende, now 25. “My best friend had been to 40-plus Broadway shows and had a movie theater in her house. I had one suitcase, and she had essentially a mansion.”

The Bronx native experienced the jolt in ninth grade, after earning a fellowship to attend the private Concord Academy. The link between wealth and quality education troubled her. How, she asked, had race and economics divided people – and why was that division OK?

“The more I experienced two different worlds, the more I started to question those two worlds,” Allende said.

She devoted herself to addressing these inequities as a Saint Rose education student, and since graduating with a degree in social studies: adolescence education, Allende has taught low-income high school students in Memphis, Philadelphia, and Troy. In May, she graduated from the University of Pennsylvania with a Master of Urban Education with a special education concentration.

Next, she will continue her look at social disparities as a Fulbright scholar in post-apartheid South Africa.

And although she was a graduate student in Pennsylvania when she applied for the prestigious program, she turned to her mentors at Saint Rose for assistance. It was at Saint Rose that she studied South Africa and considered the history of racism and civil rights South Africa and the United States shared. As a student, she had first discussed the idea of a Fulbright with Dr. Claire Ziamandanis, a professor of Spanish and advisor to the Fulbright program.

“When I started my application, I really wanted Claire to read through it, and she said she could put together a panel at Saint Rose in a week or so,” she explained, referring to the committee that interviews Fulbright applicants. “Working with them was so natural. I really felt like I was at home.”

Allende originally came to Saint Rose for the small community feel, along with the strong academics. By then, she was troubled by the glaring inequalities her own education had revealed. In New York, she had had no science education or extracurriculars, while at Concord, students already understood basic biological properties, chose courses from a course catalog, and engaged with 50-plus academic and social clubs.

In addition, she notes, she attended Concord through a TEAK Fellowship, one of 30 students chosen from a pool of 300 applicants. To qualify, she spent summers taking rigorous extra classes in math and reading – opportunities her fellow classmates would not have.

“How is it that we, living in the wealthiest country in the world, have such tremendous disparities, especially in what’s meant to be our equalizer – our educational system?” she asked.

Saint Rose, she said, was “right in the middle,” small and community-oriented like her prep school, but diverse and accepting like New York City.

Allende dove in, working as a mentor with ALANA students and taking part in other organizations devoted to LGBTQIA+ and Latino students. She thrived in her education and history courses, learning about perspectives from cultures around the world.

Next, she headed for Tennessee with Teach for America, teaching Shakespeare to some 10th graders who didn’t know how to pronounce letter sounds. She ended her service early because of a death in the family, but Allende used the time to teach at a charter school in Troy. Once again, she was struck by the differences.

“My New York students were a lot better prepared than those in Memphis,” she said adding “and none were as prepared as Concord, which put a big emphasis on critical thinking.”

In graduate school, she studied urban education and worked as a middle school special education teacher at Mastery Charter School – even winning best new teacher this past year.

She expects to go to South Africa in February 2022. Though she has not yet gotten her assignment there, nor does she know how the experience will shape her career, Allende said her eclectic background and strong education have prepared her.

“My Saint Rose education and history and poli-sci professors were incredible,” she said. “I know I’m a good teacher, and without Saint Rose, I wouldn’t be half the teacher I am today.”