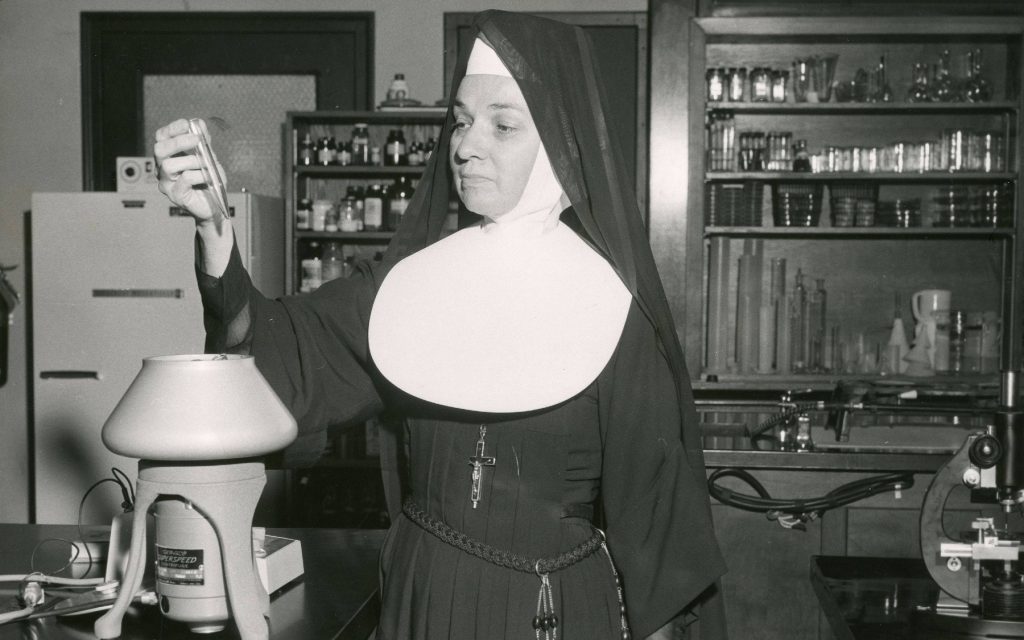 Sister Margaret Keeshan, CSJ, Ph.D. ’50, G’52 was born in 1915 – five years before The College of Saint Rose opened its doors. Growing up in Albany, New York, she would hear the pastor at her parish discuss the plans for Saint Rose.

In her youth, she would perform at the College with her school’s orchestra. She recalled attending performances and Christmas parties with other local children.

“I always used to say to the Sisters, ‘I think I know more about the College from having grown up here than some of you do from having been here.’ Because, in a sense, I watched it grow,” Keeshan said in an oral history interview with a student in 1998.

Keeshan entered the order of the Sisters of St. Joseph in 1934. She later attended Saint Rose, where she received a bachelor’s degree in mathematics in 1950 and an MA in Biology two years later. She would go on to receive her doctorate in biology from St. John’s University.

Keeshan was drawn to the field of biology because she loved nature and the outdoors. In her oral history, she recounted having a garden and going camping as a young girl.

“I’m nearer God’s heart in a garden than anywhere else on Earth,” she said, referencing poet and hymn-writer Dorothy Gurney.

Keeshan was interested in several fields of science, which was demonstrated in the work she contributed to as a student and professor. The summer after receiving her doctorate, she spent it at Marine Biological Station in Woods Hole, assisting with marine biology research. Then, Keeshan spent two weeks at the University of New Mexico, studying the “application of computers to biochemical and biophysical research.” She also received significant grants from the Atomic Energy Commission and the Nation Institutes of Health to aid in cancer research — some of which secured lab equipment for Saint Rose.

Following the Sisters of St. Joseph’s values, Keeshan believed in “education of the whole person.”

As a biology professor, Keeshan would tell her students to explore areas outside of their field. She would tell them not to “ be a scientist with blinders on your eyes” because “they are no good.”

From 1961 to 1966, she served as chair of the Biology Department before becoming College president. Under her leadership, in 1969, Saint Rose became fully coeducational.

Keeshan looked at this change as a way to further students’ education and create a more well-rounded experience.

“Men and women always complement one another, and hopefully, for the good,” she said.

She left her post as president in 1970 and relocated to Pine Ridge, South Dakota where she taught biology to Native American students. Keeshan returned to Saint Rose in 1973, serving the remainder of her time there as a biology professor. Even in her retirement, she remained on campus for another eight years where she was a gardener and a prayer witness.

Throughout her time at Saint Rose, she bore witness to some of the most significant events in American history: the recovery from World War II, the Moon landing, and the Kent State massacre. As Saint Rose changed, Keeshan was open-minded about the changing student body and their needs.

“My personal feeling is that religion is something that the person has to decide, and I think religion courses should be available for any that want them,” Keeshan said when asked if religion still had a place on campus. “People should not be forced to take them,” she added.

Keeshan was a member of various groups and organizations, including the Society of Protozoologists, New York Academy of Sciences, the American Society of Zoologists, Delta Epsilon Sigma, the Board of Directors of American Red Cross, the National Scholastic Honor Society, the American Association for the Advancement of Science, and the American Institute of Biological Sciences.

She was a scholar, scientist, devout Catholic and sister, and shared her love of learning with grace and humor. Keeshan passed away on March 30, 2008, at St. Joseph’s Provincial House in Latham. She had been a sister for 72 years.