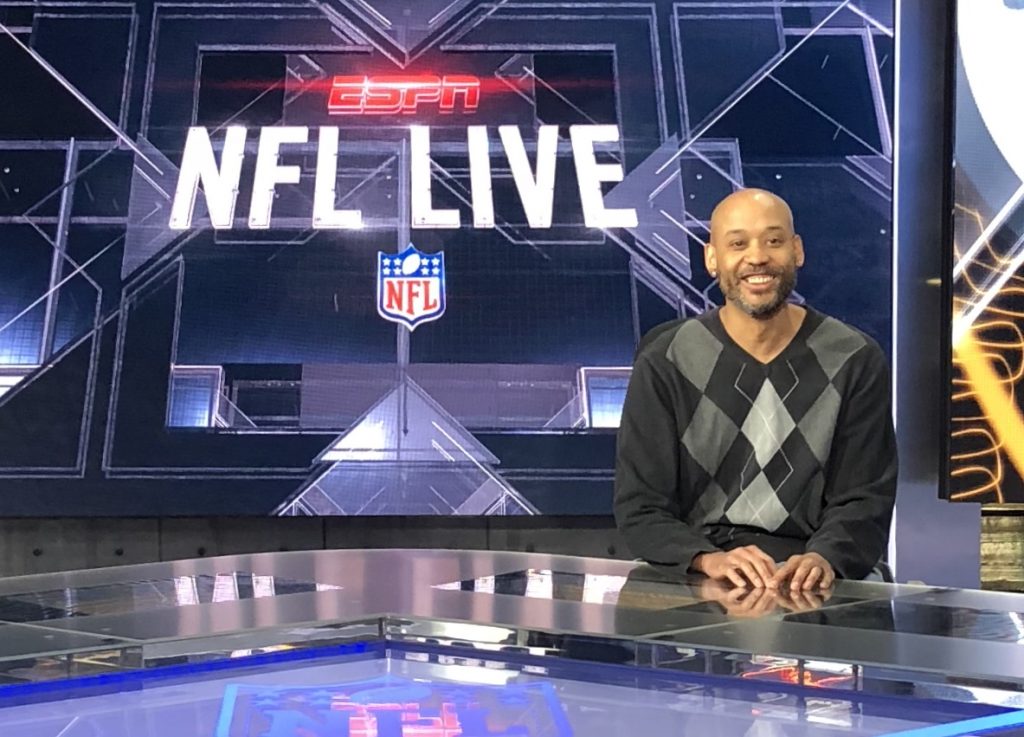 The next time you’re watching a sports program on TV, keep Christopher Clarke ’95 in mind. Whether you’re viewing a show about Serena Williams and her adorable daughter, how many medals Simone Biles will win at the Olympics, Kawhi Leonard’s ball-hawking artistry, what the Packers think of Aaron Rodgers, or Derrick Henry’s MVP prospects next season, you’re experiencing carefully curated content. From game highlights to quotable sound bites, Clarke is responsible for having that content ready.

“My department takes in all the games, press conferences, and B-roll footage into our servers,” says Clarke, who is coordinating media operator in network operations at ESPN in Connecticut. “Part of my job is ensuring that everything is titled correctly so people can find it. If someone is editing a SportsCenter feature on LeBron James, for example, I can help them get the material they need so they can put together the best feature they possibly can.”

Behind the scenes: busy every minute

From the time he arrives at the office at 6 p.m. until he leaves at 2:30 a.m. (or 3, 4, or 5 a.m.), Clarke is busy providing operators at ESPN’s many channels (e.g., ESPN2, ESPN Classic, ESPNews, and so forth) with the footage they’ve requested, coordinating recording and content management with other departments, performing quality control on new recordings, and managing content on the servers.

Clarke helps external clients, too. In addition to serving its own networks, ESPN also collaborates a lot with competitor networks, each providing footage to the others to ensure they have the material they want for their programs.

“If it’s a baseball game, we’ll send it to MLB network, or if it’s basketball season, we’ll trade a lot with Turner Sports,” he says. “Even though we’re in competition for ratings and best programming on the air, we do a lot of sharing.”

Like most people working in sports last year, Clarke saw his workload fluctuate dramatically during the height of the pandemic when spectator sports practically shut down.

“It slowed down for quite a while. One second we’d think something would happen, and we’d get close to the date or on the date, and the event wouldn’t happen,” Clarke says.

“We normally take in 600 to 625 feeds per day, and during the summer last year, that got down to about 350,” he says. “It was a lot less stressful, and a lot of people were able to get their vacation time in. Now everything’s ramped back up, now that people are getting their shots and we have a better idea of how to keep people safe.”

Pivoting from business to communications

When Clarke, a Staten Island native, began at Saint Rose in 1990, he couldn’t have envisioned how his career would turn out.

“I originally majored in business management, because I was hoping to open up a bar or restaurant of my own,” he says, adding that he had taken business classes in high school and done well. But, in about his third semester, he realized that he wasn’t in the right major.

“I was doing horribly in math and economics, and I thought, ‘How am I going to manage a restaurant if I can’t manage this?'”

His advisors suggested that he consider public communications, so he tried some intro courses.

“Right off the bat, I fell in love with it,” he says. “I realized that this was what I was supposed to be doing.”

His grades got better and better, his motivation came back stronger, and, with the guidance of Professor Fred Antico ’78, he found more and more opportunities in the field. Each experience only confirmed that he’d found his calling.

“I was fortunate to have Fred Antico there every step of the way – I was lucky to have him for my TV studio, TV field, radio courses,” says Clarke, who also started helping out with freelance projects Antico had been contracted to do. “We did a lot of church ceremonies, commercials, and I was getting so much experience even before I graduated, a lot of projects to put on my resume before I finished my degree.”

Sneaky popularity and a penchant for teaching

Even more valuable experience came with his internship at Channel 10 (ABC) in Albany, where Clarke did such an amazing job that his colleagues refused to let him go. When Clarke was about to graduate from Saint Rose, his coworkers advocated for hiring him.

“They wanted to keep me there because they knew that otherwise, I was just going home,” he says.

Channel 10 hired him as a part-time operator, although the 20-or-so weekly hours usually morphed into about 40. That part-time position eventually turned into a full-time one, and Clarke remained at Channel 10 for about five years, learning how to operate the camera, audio, tape decks, master control, and just about everything else.

“That station set me up so well that when I came to ESPN it was easy,” he adds. “I had done it all before, just on a smaller scale.”

One thing that Clarke didn’t learn until after he left Albany was how much he enjoys teaching.

“I do a considerable amount of training with new operators when they start; I’ll teach them whatever position they’re learning, and I’ve taken over the whole process for critiquing them when they’re ready to take their final test,” he says.

“I have a long list of operators that, based on what they’ve heard from other operators, want me to train them in a lot of different areas.”

That demand means a lot to Clarke: “Last year, I won Trainer of the Year, which made me feel really happy because it’s based on the votes of the operators.”

Clarke stays in touch with his Channel 10 friends and Saint Rose communications faculty.

“Before the pandemic craziness started, I was on an alumni panel talking about our careers and what we do, and over the years I’ve come into the classroom to talk to the students about my career, where I came from, where I’ve been, and what they might possibly do.

“I always joke that, if I had known I liked teaching this much, I could have been the next Fred Antico.”