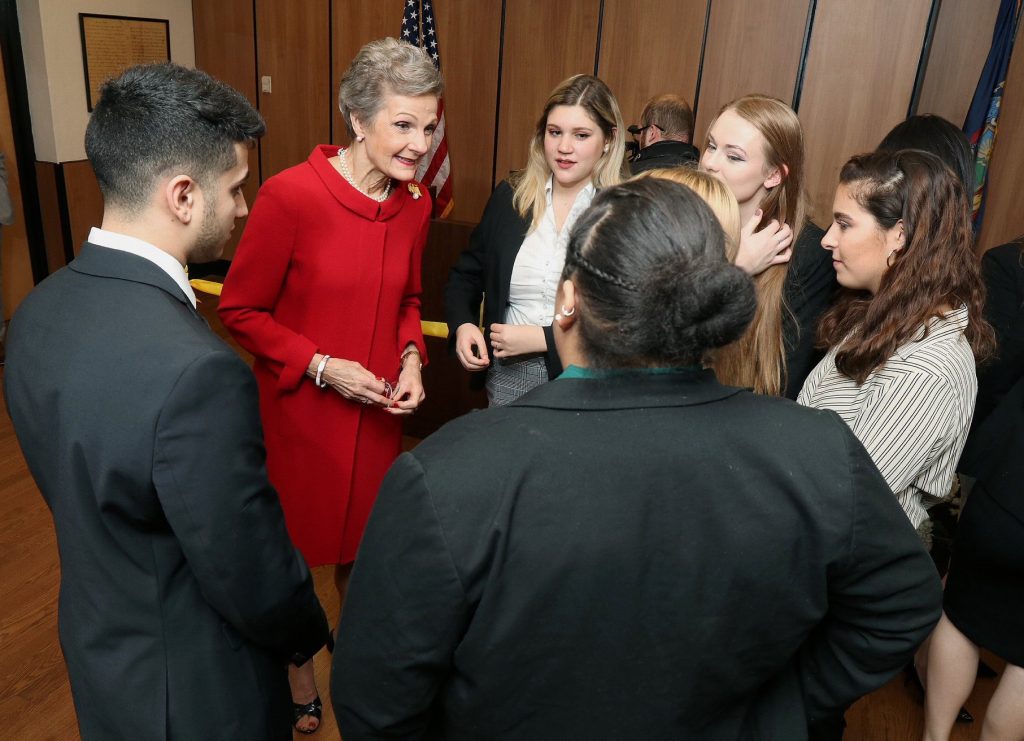 Since graduating in 1970 and launching her brilliant law career, The Honorable Loretta A. Preska has remained a familiar face on campus. The inaugural Jurist in Residence, she mentors students at The Honorable Loretta A. Preska ’70 Mock Trial Courtroom, for which she and her husband, Thomas J. Kavaler, Esq., provided philanthropic support, and which is also supported by the generosity of her law clerks.

After earning her J.D. at Fordham University in 1973, Preska worked as an attorney in private practice. In 1992, she was appointed to the Southern District of New York, becoming Chief Judge 2009-2016, and has presided over numerous notable cases, including those involving Abduwali Abdukhadir Muse, and Bloomberg LP against the Federal Reserve Board. She also holds an LL.M. in trade regulation from New York University School of Law and an honorary degree from Saint Rose.

Most of my memories of Saint Rose are of the two areas where I spent most of my time: chemistry and debate. I was a chemistry major, and loved all the courses, particularly organic chemistry, which Sister Mary Rehfuss made so interesting – I still have my organic chemistry textbook in my chambers! My fondest memories are of laboring alongside my lab partner, Gay Rindone Johnson, a friend to this day.

As an incoming student in 1966, because of my high-school debate experience, I was dragooned by Sister Bernarda Jacques into the Debate Club. It was my lucky day. First, I was teamed with a junior, Pat Fox ’68 (now Dr. Pat Fox). We had the best time in America, driving to tournaments at Iona, NYU, Niagara, and West Point – and Pat and I became lifelong friends. Second, debate helped me learn public speaking, without which I probably would not be where I am today.

Today, the Saint Rose engagement I most enjoy is visiting with the Mock Trial team, established by my wonderful law clerks on the occasion of my 20th anniversary on the bench. Thanks to the talent and work of Professor Al Chapleau, prospective students seek out Saint Rose to join the team, whose members are learning skills that will assist them throughout their lives. They are smart, hardworking, lively, and engaging, and it is a great pleasure to visit with them each year.

Saint Rose taught my classmates and me to be grownups and responsible citizens. We learned how to think critically and look at an issue from all sides – there was no political correctness.

We were taught good values: to embrace hard work and education, follow the law, and give back to our communities. Most of all, we learned to govern ourselves by our moral compass. In my chemistry courses, we frequently discussed scientific ethics: Just because you can do something, should you? From what I see of my classmates, no matter their occupation, Saint Rose taught us to be productive members of society and forces for good.