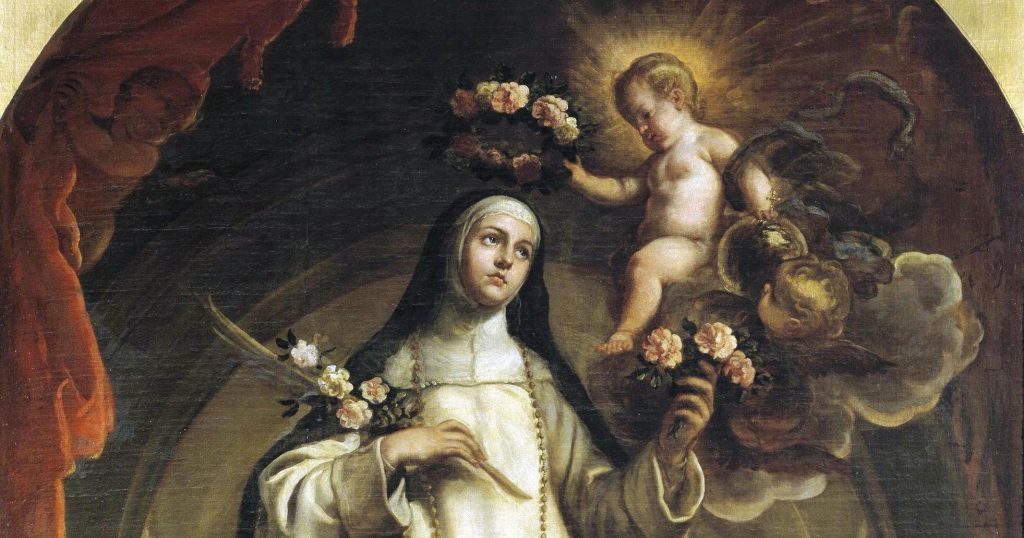 The patron saint of Latin America, indigenous Americans, and the Philippines, Saint Rose of Lima is known for her extreme piety, severe asceticism, and care of the needy.

Born Isabel Flores de Olivia in Lima, Peru, in 1586, she received the nickname “Rose” because a servant had allegedly seen her face turn into a rose in a vision (she officially took the name Rosa at her confirmation in 1597).

Known for her exceptional beauty, Rosa aspired to become a nun, but her parents pressured her to marry. To deter potential suitors, Rosa cut her hair short and burned her face. She performed secret and often painful penances, fasted multiple times weekly, and permanently abstained from eating meat.

Finally acceding to Rosa’s wish to take a vow of chastity, her father relented and provided her with a room to herself, where she spent hours in prayer and was said to sleep only two hours a night so as to have more time for prayer. She brought sick and hungry individuals to her room to care for them, sold her needlework and flowers she had grown to help her family, and made and sold lace and embroidery to support the poor.

At age 20, she joined the Third Order of St. Dominic as a lay member, and continued fasting and performing self-imposed penances, including burning her own hands. Rose wore a heavy silver crown with spikes facing inward to remind herself of Jesus’s crown of thorns; at one time, a spike became embedded in her skull and was removed only with considerable difficulty.

She died in 1617 at the age of 31, and her funeral was a major event in the city. According to the Catholic Church, many miracles followed her death, including a story that the city of Lima smelled of roses at the time of her death and that roses began falling from the sky. Many places in the New World are named Santa Rosa after her.

Saint Rose was beatified in 1667 by Pope Clement IX, and canonized in 1671 by Pope Clement X. She was the first person born in the Americas to be declared a saint by the Catholic Church.

When Bishop Edward Gibbons met with Sr. Blanche Rooney in 1919 to begin planning the new women’s college that would become The College of Saint Rose, he felt that it would be appropriate to name the school after the first saint from the Americas. In later years, the Sisters of St. Joseph of Carondelet chose to direct the “rose” reference more towards Rosa Mystica, a poetic name for Mary.

Saint Rose’s graceful strength in the face of adversity, selfless dedication to helping those less fortunate, and commitment of herself in the service of a higher good continue to inspire The College of Saint Rose.