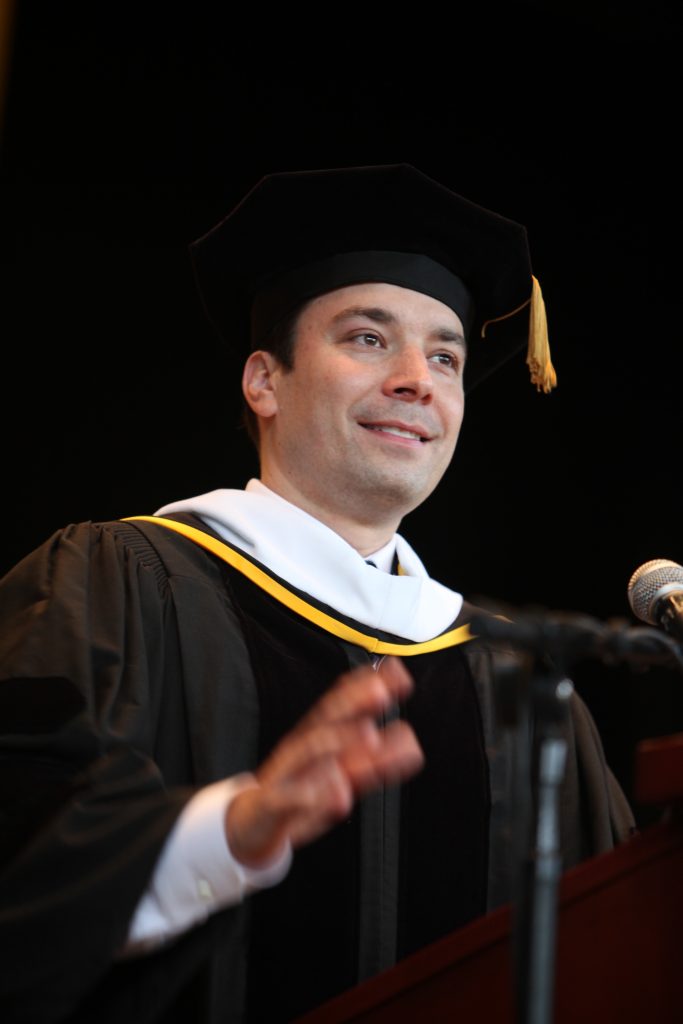 Before the “Tonight Show,” the “Late Night Show,” and “Saturday Night Live,” Jimmy Fallon ’09 was performing his stand-up routines at Saint Joseph Hall, the laundry room of Lima Hall, and local dives in Albany.

Or, he was testing out his material on Ruth Wakefield, then-assistant to the vice president for student affairs, who Fallon grew close to during his tenure as a work-study student in her department.

“He’d look up and see me, stop scribbling and try something out, then say ‘Ruth, how does this sound?'” said Wakefield in an interview from 2014. “It might have been a joke or lyrics or a song, and I would laugh because it was so silly. I didn’t realize at the time how important it was to him. He was really working.”

Fallon started at Saint Rose in 1992, but a semester shy of graduation, he took a chance and moved to New York City, and then on to Los Angeles, to pursue his dream to be on “Saturday Night Live (SNL).”

His gamble paid off. Today, Fallon is one of the most successful TV personalities of our lifetime. He has hosted the “Tonight Show” for over six years, succeeding Jay Leno, starred in multiple films, and still makes appearances on “SNL,” which catapulted him to fame in the late ’90s.

And although he reached stardom before graduating from Saint Rose, Fallon returned 14 years later to receive his bachelor’s degree in communications and an honorary degree reflecting his achievements at the College’s 2009 commencement ceremony. The College was pleased to award Fallon his diploma after he earned experiential learning credits through a portfolio review of his television work.

At the Saratoga Performing Arts Center in May 2009, Fallon took on the roles of both commencement speaker and a graduating student. He spoke to the Saint Rose community about his scary decision to drop out of College, his failures and successes, and the opportunities that Saint Rose afforded him, such as the College’s ACCESS program (today’s AOE program), which provides extra academic support to students who might not otherwise be admitted to college.

With his parents, Jim and Gloria, and his wife, Nancy Juvonen, seated upfront to hear his commencement remarks, Fallon was made an official graduate of Saint Rose and one of the College’s most revered alumni.

“I am lucky to have an amazing wife, great friends, and I will always have those people in my life, and I met a lot of them at Saint Rose. That is one of the things I am so grateful for during my Saint Rose days is the people I met. I am also so grateful for how hard Saint Rose taught me to work,” said Fallon at commencement.

And, true to form, he added a joke: “Seriously, do you guys know how hard it was to get an honorary degree from this place? It’s ridiculous.”

Click here to watch part of his commencement speech.