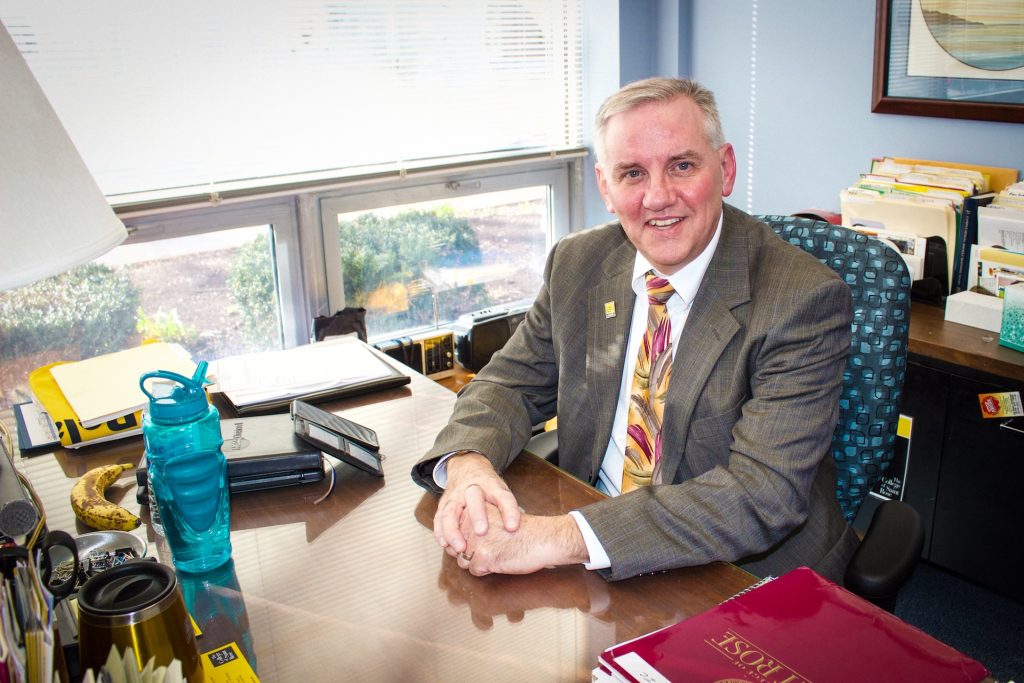 When Dennis McDonald retired in 2019, it was hard for many people at the College to imagine a time when he was not there. A student in the late 1970s, he continued as a high-profile but understated administrator with an enduring impact on scores of students.

Since stepping down as the vice president for student affairs, he continued much as he had in the job: living his faith, devoting himself to his family, and serving organizations that assist those in need (with perhaps a little golf thrown in here and there).

“I never looked at my time at the College, in whatever position I held, as a job,” he said recently. “It was a vocation. I was called to serve those who attended and worked at the College. It was important to me that everyone was treated with respect and dignity.”

While steeped in College history and its Catholic heritage, McDonald distinguished himself by keeping up with the needs of Saint Rose students. He headed up the lengthy effort to make Saint Rose tobacco-free. When the federal government found colleges and universities were not taking sexual harassment and assault claims seriously, he immersed himself in discussions and became the first Saint Rose Title IX coordinator, a job that put him in touch with neighboring institutions. McDonald supported student efforts to keep tuition from rising. He heeded the call to help those meet out-of-pocket expenses for car repairs, rent, and textbooks. The emergency fund that now bears his name has enabled many students to continue their studies at Saint Rose.

Believing in the best of his students did not mean McDonald was naïve about college life. When word of a large off-campus party reached his desk, he met with the hosts.

“I reminded them our good neighbor policy and the consequences if the behavior continued,” he said. “That usually did the trick. “

An Albany native, McDonald attended Cardinal McCloskey High School and then Hudson Valley Community College. He transferred to Saint Rose as a junior, earning a degree in religious studies and meeting many life-long friends, including his wife, Jeanne O’Connor ’78.  (He later earned a master’s in college student personnel from Saint Rose.)

He was also involved in the College’s religious life and service projects, including high school retreats with the Diocesan Youth Ministry Office. Through his time at the College, McDonald shared his vocal talents on- and off-campus, and was involved with Equinox, Inc., the Juvenile Diabetes Research Foundation, and other organizations.

Today, he remains involved in the faith community, such as the Upper Room Inclusive Catholic Community. McDonald was ordained a priest through the Association of Roman Catholic Women Priests, revering the institution while trying to make it better.

“I’m continuing my vocation with a new community of like-minded people looking to create a more just and equitable world,” he said.