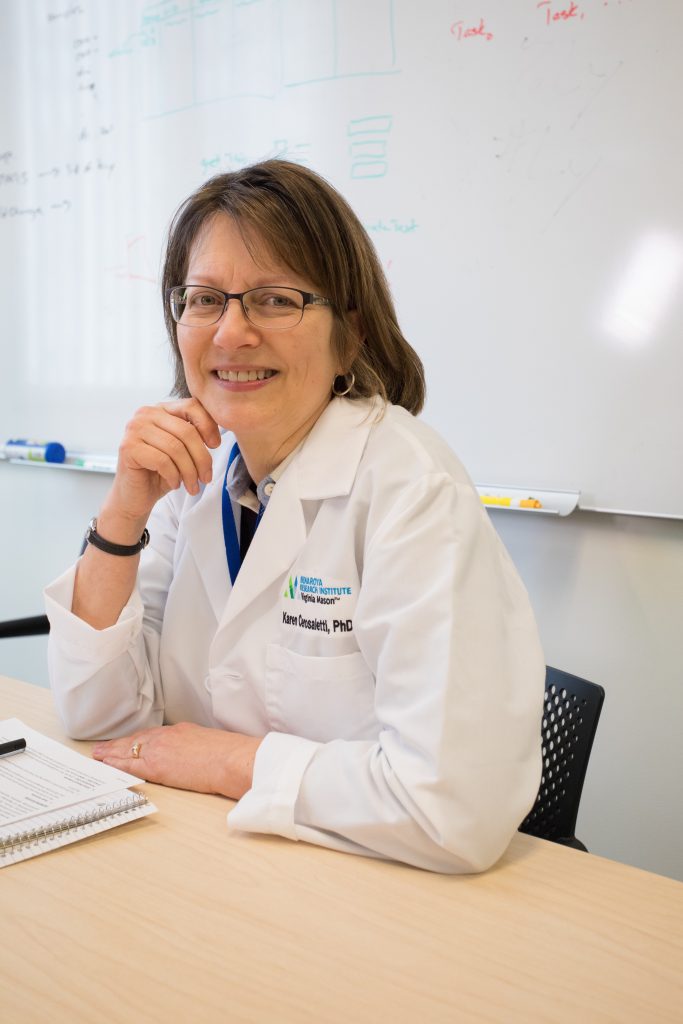 Dr. Karen Cerosaletti, Ph.D. ’82, the director of the Center for Translational Immunology at the Benaroya Research Institute (BRI; Seattle, Washington), manages a laboratory that studies immune-system-related disorders and issues. She often thinks about the selflessness of the volunteers who donate blood samples to power her research.

The COVID-19 pandemic quickly shut down BRI’s clinical trials – “You don’t want to give an immunosuppressive drug to someone when there’s a pandemic,” says Cerosaletti – and suddenly the Type 1 Diabetes Clinical Research Program had next to nothing to do. But a quick-thinking colleague volunteered the organization to help the global effort to develop a COVID-19 vaccine.

“We were able to quickly pivot to use our clinical-trial infrastructure for the Pfizer/BioNTech vaccine trial,” she says.

Cerosaletti was one of about 100 BRI employees who volunteered for the clinical trial, which comprised 44,000 participants around the world.

“I was excited about participating, although a little concerned because it was a two-year-long, double-blind, placebo-controlled trial,” she says.

That meant that half the participants would receive placebo.

“I was concerned that, if there were an effective vaccine, I might not be able to access it if I were receiving the placebo,” Cerosaletti says, adding that she always had the option of dropping out before the two years were up.

“At our center, we always benefit from other people’s altruism to participate in our research, so I saw this was a way to give back in a huge area of need.”

Cerosaletti received her first shot before Labor Day, and her second in mid-September. The participants keep a “COVID diary” and report any symptoms of the vaccine or of COVID-19 on a weekly basis (other than a bit of soreness, Cerosaletti had no adverse effects).

The two-year trial continues, even though the vaccine was fast-tracked to FDA approval and is being distributed to the public because of its efficaciousness.

“They’re offering vaccine to the people who received the placebo,” says Cerosaletti, explaining that the trial participants can request to have their “code broken” to find out what they received. If they received placebo, they have the option to request the vaccine and are put on the same schedule in relation to risk as the general public to receive the vaccine.

The unfortunate, huge spike in infections this past fall helped accelerate the trial’s results, because it depended on enough study participants contracting COVID to determine whether the vaccine was providing effective protection.

“So, while it was horrible that rates went up, the silver lining was that it helped move the vaccines forward faster than expected,” says Cerosaletti.

On the leading edge of the learning curve

With the U.S.’s first diagnosed COVID case, Seattle was the epicenter of the country’s initial outbreak.

“We were ahead of the curve in terms of being aware of the pandemic moving to the U.S., for screening, and also unfortunately for deaths,” says Cerosaletti.

Deemed an essential business, BRI stayed open until an employee contracted COVID. Like many other organizations, it had employees work remotely unless they had to be onsite for an experiment or to care for animals.

“Because we’re affiliated with Virginia Mason, we had access to PPE,” says Cerosaletti. “We were back full time by May.”

BRI initially canceled its meetings and seminars, then moved to online platforms.

“It’s worked out really well,” says Cerosaletti, who as a lab director is in meetings all day long. “I typically don’t do experiments – I’m analyzing data, providing information for others, moving projects forward,” she says. “I’m the motor behind the work that’s going on at the lab.” In her capacity as director of the Center for Translational Immunology, she also mentors and works with the center’s faculty, writing papers and grants.

A career devoted to science

Ever since high school, Cerosaletti knew that her career path would center on science. She followed her brother to Saint Rose and majored in medical technology, switching to biology in her second year.

“Saint Rose gave me a good foundation in basic science and chemistry,” says Cerosaletti, who gained a mentor and lifelong friend in Sister Tess Wysolmerski. “I also had the opportunity to be an NSF undergraduate research fellow, and Sister Tess helped out and encouraged me to do that. It was a great opportunity for me to immerse myself in research for the first time.”

After graduating from Saint Rose in 1982, the Oneonta native worked for a few years as a research technician in an infectious-disease laboratory in Rochester, New York. She became interested in immunology, earning her doctorate at the University of Rochester in 1990, then moved to Seattle with her husband, a Seattle native.

Cerosaletti worked as a postdoctoral fellow at the Fred Hutchinson Cancer Research Center, where she became interested in human genetics.

“I came to BRI to learn more about human genetics and gene mapping and cloning, and we were able to successfully map and clone a gene involved in a radiation-sensitivity disorder,” she says.

“Almost all autoimmune diseases are complex genetic disorders,” she explains.

She was promoted to faculty track and has been working as faculty since 2010.

“All of my work is translational, meaning that we work on human samples so it can quickly be applied to the clinic.”

Perhaps more than ever, now is an exciting time to be in science. Cerosaletti marvels at the unprecedented levels of collaboration among scientists, pharmaceutical companies, funding agencies like the National Institutes of Health, and the rapidity with which they’ve found solutions.

“It feels good to be contributing not only by doing science and publishing results, but actually being part of the experiment,” she says. “My own work is so dependent on participants who donate samples, so it’s nice to be part of that. I wouldn’t be able to do my work if people weren’t willing to help move the science forward.”