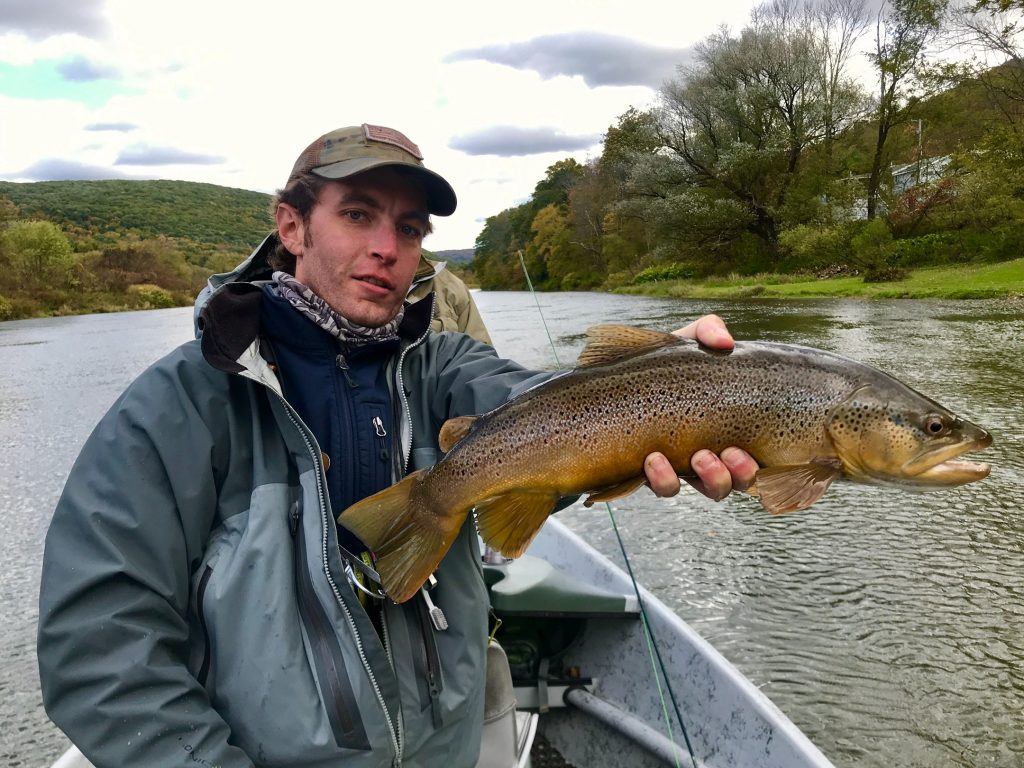 As a Saint Rose undergrad studying business administration, Matthias Hackett ’13 founded and started up Castakite, a fishing-rod-launched kite of his own invention. He expanded Castakite to retail in 1,200 stores across the U.S. before selling the company to an outside investor. A lifelong Catskills fly fisher, Hackett is now a full-time flyfishing guru in Roscoe, New York, a.k.a. Trout Town, USA, guiding seekers of wily wild trout. We caught up with him recently.

During trout season, I’ll meet my clients in Roscoe between 9 and 11 in the morning. We pack up the boat in town and set up the rods.

I’ll have planned out the trip, starting by checking the conditions for the three different parts of the Delaware I float: the East branch, the West branch, and the main stem where the two branches meet. There are sensors in the rivers providing flow and volume information, and I check flowcharts to determine the water levels each morning.

The rivers we float are controlled by dams. It’s all of New York City’s drinking water; we get what they don’t use, so the water system is all manmade. The water comes out 200 feet below the surface at a constant 53 degrees. Because the water stays cold year-round, we have this unique, wild population of brown and rainbow trout.

Our fly fishing is based on the ecology of about 12 major bugs that hatch throughout the season. They all vary in size, color, and shape, and you have to put the pieces together on the river. If you see a fish gently eating dry flies off the surface, you have to figure out what that fish is eating.

This is the most sophisticated fishing on the planet. The Catskills are the birthplace of U.S. fly fishing, which came from England in the 1800s. There is very little luck involved; it’s skill and coaching. Whatever bug that fish is eating at that time of year is literally the only thing the fish will eat. If your fly is 5 millimeters too long, or is too dark, or moves an inch while it’s floating, a wild fish won’t eat it.

Whichever bug it is will be in one of three main stages: nymph (subsurface), emerger (surface), or adult dry fly (above the water). You have to imitate whatever stage the bug is in, which can change within minutes. Knowing all of this is key, so that’s why it’s important to hire a guide like me, who sees it every day and knows exactly what to expect and put out there on the water.

Based on what I’ve planned, we put the boat in the water and get in, and I call a shuttle to move the car we’ve left on the bank, the six-eight-10 miles we’re doing that day.

We fish three to five hours, stop and have lunch on the side of the river, pack back up, and go out for the second half, which is usually 3:00 until dark. After we hopefully catch fish, we have fun. You’re floating down the river with usually no cell service. Seeing people without a cell is cool. Especially the younger ones: They’ll still take pictures every 10 seconds, but they can’t upload them or text their friends or Snapchat. It’s great.

Fishing season opens April 1, but for trout, it doesn’t get good until May-ish.

Could we call it fly-niche-ing?

There are different levels of clients and guides.

About 95% of my customers come from New York City,Westchester, northern New Jersey. Very wealthy: hedge fund managers, professional athletes, politicians. They have someone who monitors every 15-minute segment of their life.

So you have these wealthy guys addicted to fishing in the Catskills, sitting in front of a calendar while they’re not managing money or something, trying to figure out the best days of the year to catch trout. They have all the money in the world but all they’re worried about is a little fly hatching in Roscoe, New York.

It’s interesting: Women and kids are 10 times easier to teach than grown males. I have a Supreme Court judge who is so sharp – you tell her something once, and she gets it. Some guys, you have to tell them 10 times.

I always try to cater to the client. I call them the week before the trip and ask about their experience level, so I know what we’re working with ahead of time and can help them have the best day on the water possible. 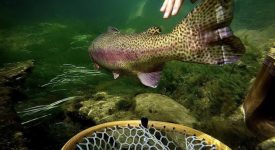 What do you do off-season?

Before Corona, I was buying properties to build Airbnbs. But, since the pandemic, everyone from the city is buying.

Prices have gone through the roof for property, lumber, building. I’m going to wait maybe two years until people who find they don’t actually like the hills will put their properties up for sale.

Until then, I’m developing the fishing side.

I normally do six trade shows each year. You meet everyone: industry insiders, video people who can help you with marketing, social influencers with 100,000 followers.

With Corona, the phone was off the hook to book trips. People couldn’t do things indoors. They couldn’t get on planes. People from the city and northern New Jersey were going camping, hunting, Airbnbing, walking around Roscoe. “Oh, let’s go fishing today!” I had a lot of last-minute trips last year, based on people who couldn’t travel deciding to do day trips out of the city.

At the beginning, when we were in lockdown, I couldn’t do trips. It wasn’t allowed. I lost a month but easily gained it back in customers that already booked for the next year (i.e., 2021).

How did your Saint Rose experience help you?

In my senior year, I was about six credits short of graduation, so I asked (then-Dean) Michael Mathews if I could write a business plan based on flying a kite with a fishing rod. I said, “I know it sounds crazy, but I can do a business plan, and I’ll really start it up.” He’s like, “Sure.”

The business plan I wrote, which is the plan I used, is the same business I got into 1,200 stores across the country.

Another professor was Barry Hughes, who was big on real-world experience and would cut through the B.S. and give it to you, how everything really was. Dr. Janet Spitz really helped me, too. Her office door was always open, and she planted little seeds that sprouted five months, a year, two years later, I looked back and said, “Holy crap, those are the seeds that she put down!”

Here’s one: Quality is recession-proof. See, I was at Saint Rose during the housing collapse, and my dad was in real estate. It was bad. It was a little scary. But I learned from Dr. Spitz that quality is what counts.

Doesn’t it get old if you’re an expert?

I do about 120 days per year on the water. But, remember, I’m not fishing that whole time, I’m trying to get the guy in the boat to catch the fish. I’m taking someone who might do it only two or three times a year. I’ll have them change things, do this, do that. It’s new and different every time, through their eyes. It’s fun.

It’s all catch and release in that part of the Delaware, which some people don’t realize. I always take a picture of the same side of the fish, and look at the spot patterns to see which I’ve caught before. The fish are funny. You’ll find some of them two miles up or down river; some stay in the same spot. They have a mind of their own. There’s one fish that we each caught like six times.

You never stop learning in fly fishing. You really have to put in the time finding out where to go and what to do. Or else you don’t deserve anything. People won’t just give you their secrets.

Finally, if you make a product, whether it’s a Castakite or a fly, you have to think about the consumer. For a Castakite, the consumer is a little kid. For a fly, it’s a wild brown trout. If he doesn’t like the product, he won’t buy it. You can see the trout sitting right there, eating every fly that comes down, but you can put your fly over him and he won’t go for it.

The customer is always right.