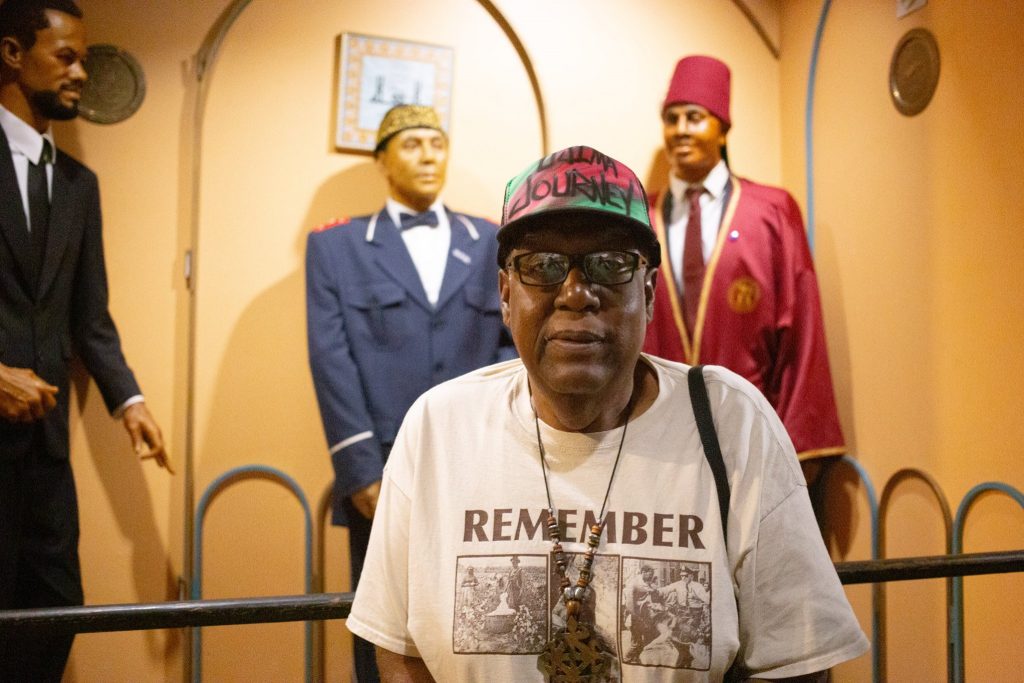 Typically, you’ll find Aaron Sitawisha Carter ’73 out and about in the community, but the pandemic has forced him to change up the way he makes connections.

The co-founder and president of Ujima Journey of the Capital District, which organizes trips for local Black children and their parents to learn about their ancestors and Black history, has spent a lot of time on the phone and in virtual meetings to continue his lifelong commitment to activist work, which began in 1968. That was only two years before arriving at Saint Rose, where he majored in history and political science.

It’s quite busy for a person of 73! I take care of me, which is a job in itself because of my health problems (diabetes).

I am president of Ujima Journey, an organization I cofounded in 1995. We organize trips for local Black children, and their parents, to learn about their ancestors and Black history. Since 1995, we’ve served more than 500 children. We incorporated in 2009 and became tax exempt in 2010.

In the past five years, we’ve traveled mostly around the East coast, such as to the African-American Civil War Museum and the Smithsonian African American History and Cultural Museum in Washington, D.C., and the African burial ground in New York City. In earlier years, we’ve gone as far as Alabama, Georgia, South Carolina, Michigan, and Canada.

Ujima, the third of the seven principles (nguzo saba) of Kwanzaa, means collective work and responsibility to build and maintain our community together, and make our brothers’ and sisters’ problems our own and solve them together. We try to implement that in practice.

We try to teach children and parents about self-reliance. Although we seek out help and donations for trips, we seek to take care of us first. We raise funds by having the children do car washes, teaching them a work ethic – people tend to help you if you’re helping yourself.

How do you work during COVID-19?

Since the pandemic, we’ve been kind of shut down, but we make phone calls and have virtual meetings to keep things going.

One fundraiser was a calendar of Black artists’ work. We were able to contribute to a food bank run by Kizzy Williams, who runs Allie B’s Cozy Kitchen on Clinton Avenue. We contributed to the African American Cultural Center downtown, and the Youth Factory, a group of Black women who have activities for community youth.

We collected money and matched individuals’ contributions for a lady who lost everything in an electrical fire.

I also belong to the local organizing committee of Justice or Else, which was involved with the Million Man March in 1995 (and again in 2005) and the Justice or Else gathering in Washington, D.C. in 2015, and I’m one of the founding members of the Capital Region Kwanzaa Coalition. 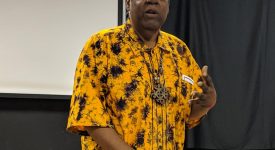 What did you do before Ujima Journey?

I was a teacher’s aide at Albany High School, and a substitute teacher before that. Before that, I worked for Arthur Eve, the first Black deputy speaker of the New York State Assembly.

I’ve been an activist since 1968, and continued at Saint Rose when I started in 1970.
I was one of the first Black students in the Higher Educational Opportunity Program (HEOP; co-founded by Arthur Eve) at Saint Rose. I did a lot of speaking in the student union, and in the classroom, on social matters. I ran into conflict sometimes. But sometimes we need to go through trials and tribulations through working for the good.

In 1973, I went to a program in Newark, New Jersey: the Congress of African People. That aided me in understanding the drive for social change. The key thing for Black people is to have an understanding of self, culture, and institutional development, beyond just going to work. It’s about developing ourselves and our institutions and homes (which is the first institution of all).

This all fits into what’s happening now – you see from whence we have come.

Back in the 1970s, the theme “Stop killer cops” emerged from Black social groups; in the Capital District, Black men like Keith Ballou (1975) and Jesse Davis (1984) were killed by New York State and Albany police. As we struggle as a country, the lack of dealing with issues, and not dealing with the truth, allows things to build up and fester. That was so in my era, and more so now. It’s really crucial now, because our country has to get its act together, or we won’t be what we keep saying we are.

Is America ready for freedom, justice, and equality? That’s what Black people, and people in general, are asking for.

Take healthcare or education: If you treat the people at the bottom right, you treat everybody right. But racism does not provide real equity.

It gave us an academic experience that involved multiple challenges in the classroom: academic reality and our reality. We did double duty: the academic study as well as the study of our social environment and community.

At the time, there was social unrest going on in America. Black people in cities were erupting. There were different numbers of Blacks being drafted to go fight in Vietnam.

We also did a student takeover of Albany High School (which at the time was just one building near the Teacher’s College of New York State). The middle and high schools and various Black student alliances throughout the region were demanding more Black teachers in the school system and more Black Studies programs in the high school.

We were fighting for accountability and our Black history. American history is written from the white landowners’ point of view. The founding of the country is based on slavery, 300 years of our labor.

During the takeover, they were supposed to negotiate with us. The police and fire departments came right behind the negotiators and started hitting us with clubs and big heavy chains. That was an experience.

Around that time, too, we had a meeting of about 2,000 people in a Catholic church in the South End of Albany. It was one of the biggest gatherings of Black people. There was a lot of social disruption going on.

But there were other things: During my last year at Saint Rose, we had the People’s Festival on Swan Street. That was about the cultural dynamics of bringing Black people together.

There’s the holidays, the Black holidays. Although those involve work, they’re about social reunion: Kwanzaa, Juneteenth, Black History Month. And there’s family and friends. I have two daughters, five grandchildren, and one great-grandchild.

Now, because we’re pinned down, I do a lot of phone calling. I’ve met people all over the country, as well as in the Capital Region. I bother people. I call them up.