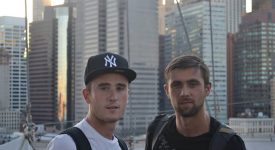 Nick Menozzi ’17 and Sam Crocker ’16 are two English nationals who work together in the London office of Impact, a California-based global tech company that helps big consumer brands grow their business through strategic partnerships. Crocker heads the company’s European business-development operations, and Menozzi, who joined Crocker’s team in 2019, has since been promoted to a senior sales role.

Although they’ve been coworkers for less than two years, these alums’ shared experience spans nearly a decade. What began as one expatriate Brit helping another acclimate to the wilds of Albany quickly turned into a bond that encompassed schoolwork, soccer, work, and everything in between.

Discovering a new country together

In 2012, Crocker was a first-year scholar-athlete at Saint Rose. A native of the southwestern town of Bath, he was recruited for the soccer team and enrolled without even visiting Albany (he had been to New York City and Disney World, though).

“I really liked the idea of being able to travel abroad, play soccer at a really decent level, and get a top education,” he says.

Coach Matt Jones had him reach out to Menozzi, a prospective scholar-athlete in London, and the two chatted on Facebook. “Then I came out to the campus for an athletics visit, and stayed for a long weekend with Sam in Brubacher,” says Menozzi.

When Menozzi returned as a first-year student the following year, Crocker quickly took on the role of big brother. Training and playing together on the close-knit men’s soccer team was a big part in their growing camaraderie. But the two men shared something even more meaningful.
“What I think is particularly special and different for me and Sam is that we had both traveled to a completely new country and city,” Menozzi says. “So it was also from a social standpoint, being far away from home, and being able to speak about things we and in common back home and that sort, that really set the foundations for our friendship.

“We were friends on a student level, helping each other out with classes. On a social level, we’d introduce each other to new people and friends,” he says.

Both men felt welcomed by classmates and teammates, and were practically adopted by friends’ families for weekend visits and holiday dinners. But there were cultural learnings that happened mostly between the two Brits, as Crocker helped Menozzi learn about the U.S.

“The exam system, the grading system, the entire educational system is drastically different from what we’re used to back home,” says Menozzi, who majoried in history and political science. “So, we synched up and found the ropes together, and guided our way through the U.S. school system together.”

As George Bernard Shaw observed, England and the U.S. are separated by a common language.

“There are some phrases that we use in different ways,” says Crocker, a communications major at Saint Rose. “When I first arrived, people would say, ‘What’s up?’ and I didn’t realize they were saying hello – I thought they were actually asking what was wrong with me.”

He also discovered that the accent he grew up with had been appropriated by Hollywood for hobbits and pirates. “I had people constantly asking me to recite ‘The Lord of the Rings,’” he says.

Back across the pond

Crocker and Menozzi found Saint Rose a great springboard for their careers, as they both interned and found their first full-time employers in New York City: Crocker in marketing for high-tech startups, and Menozzi in financial services.

“After graduating, I spent a couple of years working in the city. Then, due to the everlasting problem of visas, I moved back to London,” says Crocker.

When he joined Impact in 2018, he found his knowledge of U.S. culture a huge advantage.

“I’ve become a bit of a translator between what’s going on in our American head office and how we put that into a U.K. context,” he adds. “It’s definitely a differentiator in the U.K. job market, knowing how to talk to Americans.”

He had stayed in touch with Menozzi, who was working as a broker on Wall Street.

“We had been talking about Nick possibly moving back to the U.K., and I told him I’d love to have him on my team,” says Crocker. “Coming from an environment where we worked together in a really high-performance environment allowed us to trust each other and know what we were going to get from each other, so it was a no-brainer for me.”

Menozzi signed on to Crocker’s team at Impact and moved to London.

“For my first 12 months at Impact, I was working with Sam every day, and he really showed me the ropes,” he says. “He introduced me to the industry, which was new to me coming from finance.”

Menozzi proved to be the best performer on Crocker’s team and quickly moved up the ranks.

“We took a lot of that chemistry that we had playing soccer together at Saint Rose and put it into a work environment, where it’s been really successful,” Crocker says.

In addition to being teammates, each man had captained the Saint Rose soccer team in his senior year. “I think that says a lot about our similarities from a leadership standpoint,” says Menozzi.

Life goals and the skills to attain them

Both men benefited at Saint Rose from the work ethic and discipline instilled in scholar-athletes. Crocker routinely hires athletes because he loves their competitiveness and focus. Another crucial experience was the challenge of studying abroad.

“There was always stuff you needed to sort out, whether it was getting visas renewed, sorting out flights, or opening bank accounts,” says Crocker. “There was a lot involved with studying abroad, and that was beneficial because it gave me the tools to go and get things done.”

“My experience at Saint Rose made me realize I could achieve goals I set myself, no matter how ambitious they might be,” says Menozzi, giving as examples studying in the U.S., winning a soccer scholarship, graduating with a double major, and co-captaining the team.

“As Sam knows, throughout my professional career, I’ve adopted the skills I learned there and the ambition I took on – I set ambitious goals and work towards them.”

Crocker is grateful for the communications faculty’s help in finding internships in New York City.

“My professors would get excited about helping me achieve the dreams I had, rather than just helping me find a job,” he says.

Menozzi appreciates the encouragement from the history/political science faculty.

“Professor Clancy was so supportive and helped me understand I could push myself academically. Professor De Pinto was super helpful during my visa application,” he says.

“But, in terms of Saint Rose playing a role in my career path, Sam is the perfect example,” Menozzi adds. “Saint Rose’s location got me to Wall Street. Networking and making friends with intelligent and successful people like Sam enabled me to be flexible in where I worked and be able to move on and explore other challenges.”