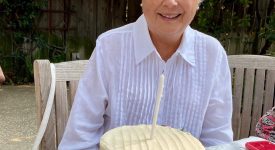 Pat Kim ’57 traveled to Saint Rose from Macau, sight unseen, without any prior knowledge of Albany, New York, or the U.S. She felt welcomed from the start and built strong friendships that endured for more than six decades. Now a longtime California resident, she is the proud grandmother of 11 and is finishing up her sixth book.

What is a typical day for you?

At 86, I consider it a blessing each day waking up to a new, well day. My husband is almost 90, and he still plays tennis six mornings a week. I know we are blessed. During this time of COVID-19 social distancing, I start my morning with a walk around the neighborhood for exercise, tending to my garden, reading, FaceTiming with our distant family (who live in Arizona, Oregon, the San Francisco area, and Orange County), dabble in watercolor as well as in Chinese ink painting, and ongoing projects.

I also take an ongoing French class with a group of ladies who love all things French. I started writing and illustrating children’s books 10 years ago, mainly for our two youngest grandchildren, Shep and Addie, who are featured in all five of my self-published books, and which I gladly share with family and friends. I am finishing my sixth book, “Once Upon a Covid Lockdown” and hope it will be ready by Christmas. I miss social interacting with friends over lunch and games during the pandemic, but I do get together with some friends in our backyards six feet apart. 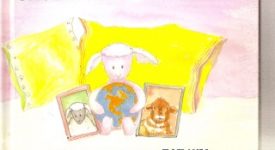 How did you find your way to Saint Rose?

I was born and raised in Portuguese colonial Macau, now a part of China. The only university available for students with an English-language curriculum was in British Hong Kong, a four-hour crossing by steamboat at that time from Macau. Admission was based not only on best grades but also on influential contacts.

My mother was thinking of sending me to England or Ireland for college, when my high school headmistress offered to help me find a scholarship to the United States. I received a full, four-year scholarship to The College of Saint Rose in 1953.

At the time, I only knew that Albany was near New York – where an uncle lived and worked. I could spend Christmas vacations there with his family. I majored in sociology because I admired the work the Maryknoll Fathers (Catholic foreign-missionaries) performed in our society and wanted to work alongside them after Saint Rose. 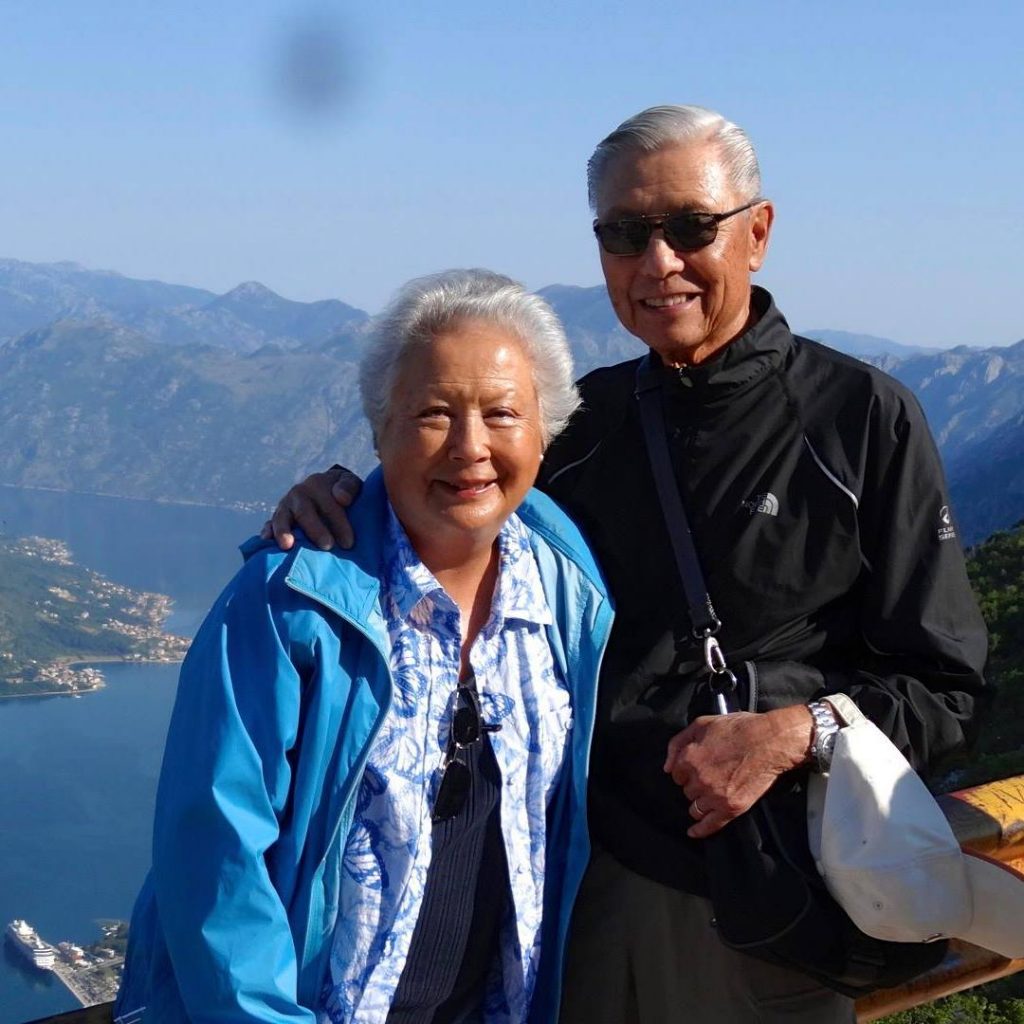 I did not go into social work. I became interested in writing through Sister Rose Bernard’s English curricula at college. After graduating from Saint Rose, I was offered an opportunity and obtained a master’s degree at the Stanford University School of Journalism and Communication in 1958. I also attended its summer workshop in radio and television writing and producing.

Meanwhile, I met my future husband, Frank Kim, at a social event at Stanford while he was attending the Hastings School of Law (San Francisco). We became engaged during my time at Stanford.

I returned to Hong Kong after Stanford, as a promise to my father, and worked for its bilingual, early-childhood television station, writing nightly news for broadcast in English while another reporter wrote the same news in Chinese. In time, I also handled children and music shows on live programs. We worked from mid-afternoon till almost midnight and on weekends.

The television studio was located in Hong Kong’s Wan Chai district, also known as its red-light district. My mother was not pleased with the location or my hours! Nor with the fact that I had to depend on coworkers for a ride home, as no public transport connected work and my mother’s house.

So, I applied to the U.S. Consulate and got a position at USIS in The American Library, counseling prospective students to universities in the U.S., testing them for college proficiencies, and helping them with applications.

Frank decided to fly to Hong Kong so that we could be married. After a simple ceremony at St. Joseph’s Church, near the American Consulate, Frank returned to San Francisco to prepare for and take the bar exams. I joined him soon afterwards. (And we celebrated our 60th anniversary last year!)

We moved to Stockton because of a job offer at the district attorney’s office after Frank passed his bar exams. We thought we’d stay a while in Stockton before moving back to San Francisco, but that never happened.

From the DA’s office, Frank went into private practice with another lawyer was later appointed to the State Municipal Court bench by Governor Ronald Reagan, then was elevated to the California Superior Court by Governor Jerry Brown.

We decided I’d be a stay-at-home mom with our five children during their formative years. I am proud to say all our children are leading happy, productive lives. I have never regretted not having a career of my own.

When our last child entered college, I taught English as a second language at our community college, San Joaquin Delta College, until I joined my husband in retirement. By then, I wanted to enjoy our grandchildren who lived far from us. Frank and I also enjoyed traveling the world together. 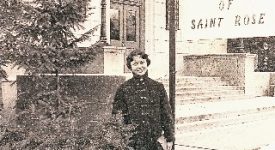 What memories do you have of Saint Rose?

I loved being at Saint Rose! I have never been more accepted and appreciated, made more friends, created more happy memories than during my four years at Saint Rose.

I am Eurasian by birth, with a Portuguese father from Macau, and a Chinese-Scot mother from Hong Kong. My mother started my earliest education at a Chinese school. I was miserable there because I was the only Eurasian student in its entire student body. The students decided I was not “one of them” and did not include me among their friends.

I entered the English curriculum at Sacred Heart School in Macau when I was 14 and loved it. The student body was a mix of many cultures; the teachers were strict Canossian nuns from Italy; everyone was friendly and respectful towards one another.

After high school, Saint Rose became my home during four carefree years. Sister Noel Marie was our freshman monitor at St. Agnes Hall. She became my confidant and friend. Sister Joseph helped me overcome my fear of volunteering in religion and Latin class and gave me confidence in myself as a student. Sister Rose Bernard made Shakespeare come alive in her classes. I took as many English classes as I could from her and elevated my English minor to a double major along with sociology.

I remember boarders on campus cringing when it came time to ask Sister Margaret’s permission for social events. She seldom smiled. We had a curfew that was strictly enforced. And Sister Eugenia, our dean of students – bless her heart – who met me upon my arrival by train as a freshman from Hong Kong. I’ll never forget how proud her first remark made me feel, as she received my two trunks, carried by two helpful GIs on my train to Albany: “I knew I shouldn’t have worried about this foreign student who came halfway around the world by herself.”

I did come halfway around the world by myself. That was the first time I had ever traveled alone. I would not be going home for visits, either, during the next four years! Through those years, I found Americans to be the friendliest and warmest people. My teachers and classmates were especially warm, welcoming, and helpful.

I felt accepted, valued; I felt I finally belonged. I have fond memories of going to the homes of friends from Saint Rose during short vacations and weekends. My first experience was Thanksgiving with Roberta Jurash ’58, a nursing student from rural New York. Her family owned a diner and several inns. As it was Thanksgiving, their kitchen was buzzing with laughter and activities.

I could not understand why tears were running down my face as I was peeling onions for dinner, as the Jurash family laughed while I apologized. I could also not understand why the father was “climbing the walls” because he was furious over something – my first experience with American slang.

I was a frequent guest at Betty Hasselman’s ’57 house on Main Street in Catskill, New York. Her father owned and ran a bar downstairs, and the family lived on the second floor, and rented room on their third. Betty told me she was raised on beer instead of milk as an infant.

My first part-time job was as a greenhorn waitress at a little Greek café, where I told a customer, “We don’t sell beer” when he had asked for root beer! 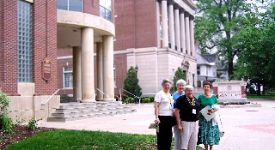 Have you been back to Saint Rose?

I went back for our 50th Reunion. I contacted and encouraged Betty Hasselman Randall ’57, Peggy Myers Hilton ’57, Mary Rita Gadway Downs ’57, and Phyllis Harte Cooney ’57 about our reunion. Such a joyous weekend of familiar faces, dear friends and memories. … I was impressed at how Saint Rose has flourished and expanded, yet still remained the same. …. Sad to know that the faculty of our days now rest in peace, as do so many of our own classmates. … I am grateful to Saint Rose. Were it not for the scholarship, I would not be where I am today. Nor the person I am. I feel humbly blessed!