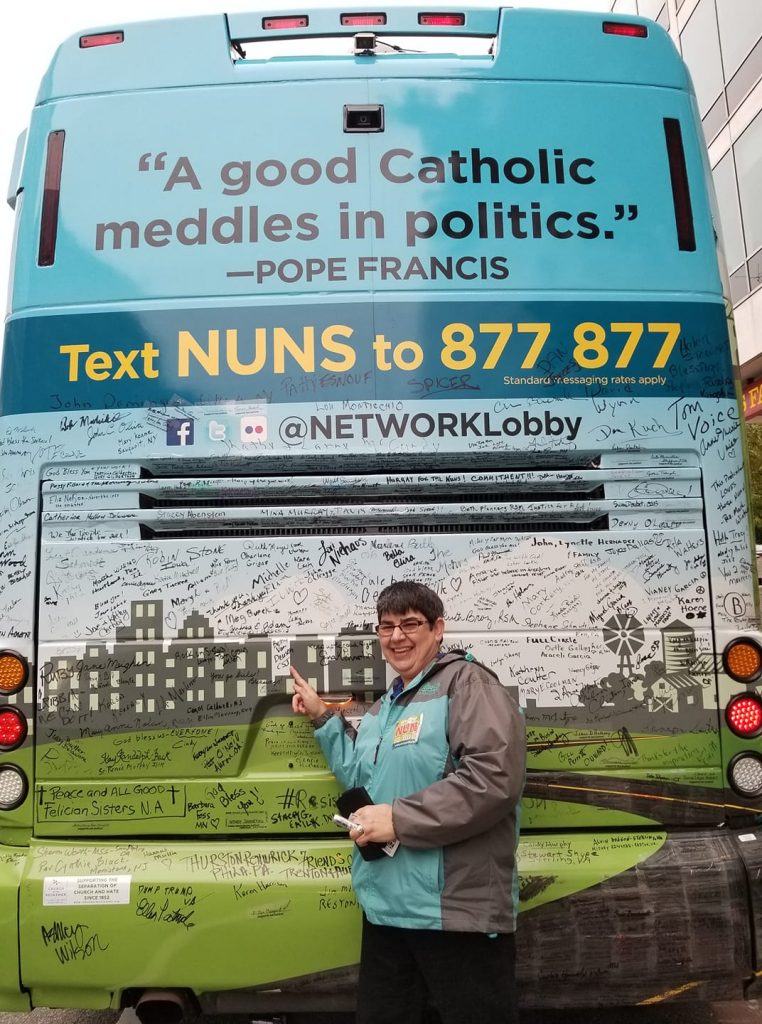 As the COVID-19 pandemic continues to hit our most-vulnerable populations the hardest, Sister Betsy Van Deusen, CSJ, ’84 continues to minister to the community. On any given day, you’ll find her directing food drives, supplying masks, and ensuring that our “dear neighbor” is fed. For the Saint Rose Trustee and director of community partnerships for Catholic Charities of the Diocese of Albany, it’s just the latest chapter in a lifetime of dedicated community service that started in earnest after she graduated from Saint Rose.

What do you do on a typical day?

There is no such thing as a typical day especially now that we live in COVID land. My role with Catholic Charities is director of community partnerships, which includes corporations, volunteers, churches, and anyone else who inquires in a rather general way.

I get to pick up face masks donated by a dear woman in Latham. I get to be on the site of a mass food distribution at 7:30 a.m. to meet the truck from the Regional Food Bank and prepare to have 40 or so volunteers make bags of food for folks to drive through and pick up.

I get to discuss with teams of people new locations where food is needed. I get to tally ZIP codes to determine where people are coming from when they come to get food. I get to serve as the liaison to the Catholic Charities Board of Trustees Mission Committee to form and inform members on what undergirds the work of Catholic Charities.

My first “real” job after graduating from Saint Rose was at Simple Gifts Bookshop, which was a not-for-profit bookshop at 813 Madison Avenue founded in the spirit of the Catholic Worker Movement and St. Francis of Assisi. I was the assistant manager and it is where my passion for justice was internalized. I had been involved in service in high school and college, but this is where I became conscious of the other part of the community equation: Why are people hungry? Why can people not find affordable housing? Why can some people do things and others can’t?

After only a year, a friend of mine was working in the domestic violence shelter at Unity House in Troy, an agency of Catholic Charities, and she suggested I apply for a job as the parenting counselor. I spent two and a half years teaching nonviolent parenting techniques, and then another two and a half running the shelter. During this time, I became a candidate with the Sisters of St. Joseph (who, as you know, founded the College) and headed to Denver, Colorado, for my novitiate, a year of study and prayer in preparation for vows.

In the ensuing years, I was a campus minister at Catholic Central in Troy, and the director of St. John’s/St. Ann’s Center, a Catholic Charities site in Albany’s South End with a food pantry, soup kitchen and furniture program.

In the most surprising unfolding of my journey, I became the director of church relations for Habitat for Humanity International. I moved to Americus, Georgia, and spent five years talking with people of faith about the work and ministry of Habitat all over the world. After 9/11, Habitat eliminated the Church Relations department, and I and my colleagues lost our jobs.

I came back to Albany feeling a sense that I “needed to come home.” I spent the summer working at Pyramid Life Center with Sr. Monica Murphy and began at St. Helen’s Church (now St. Kateri Tekakwitha Parish) as the youth minister and later the pastoral associate for evangelization and Christian service. Sensing that God had a plan for me, after Hurricane Irene and Tropical Storm Lee, I went back to work for Catholic Charities as a disaster case manager working with people affected by the storms.

My present position became available and the rest, as they say, is history!

I love to read, walk, get together with friends, and play cards, and I don’t even really care if I win! I swim, cook, and bake, and connect people with the things they need and help others get rid of the things they don’t!

Please share a memory or two from your Saint Rose experience.

I am part of a legacy family before we talked much about that. My mom (Mary Van Deusen ’46) graduated as a nurse in 1946 and wanted one of her four daughters to go to Saint Rose. I was number four and her last hope, and I assured her that I wasn’t going to Saint Rose.

She asked if I would at least go visit.

When I walked onto the campus, I knew I needed to go there!

And it was the right decision. It was a place where I gained confidence and skills as a leader, where I deepened my faith and was challenged in that.

It was a place where we had a lot of fun and worked really hard. And it is still these things for our students, and for the Saint Rose community.

One of my fondest memories was the summer that the library was expanded and a team of four students moved the library into the new Neil Hellman Library. We called ourselves “Might Movers NHL.”

I remember going to the dark room on the fourth floor of Science Hall and developing film for the newspaper, which was called Inscape, for the following day’s issue.

Now, that does tell you how old I am?

Why should alums continue to engage with their alma mater?

The gifts and blessings that we received at Saint Rose are still being sought by students today, and those of us who are around have much to contribute to the educational experience of the students.

Perhaps, when we were students, we received scholarship funds through the kindness and generosity of others; we can extend that same gift to our students today.

Probably the most important thing that I can do is pray for the College and the many people who have and who will be blessed and will bless others at this little place called HOME.