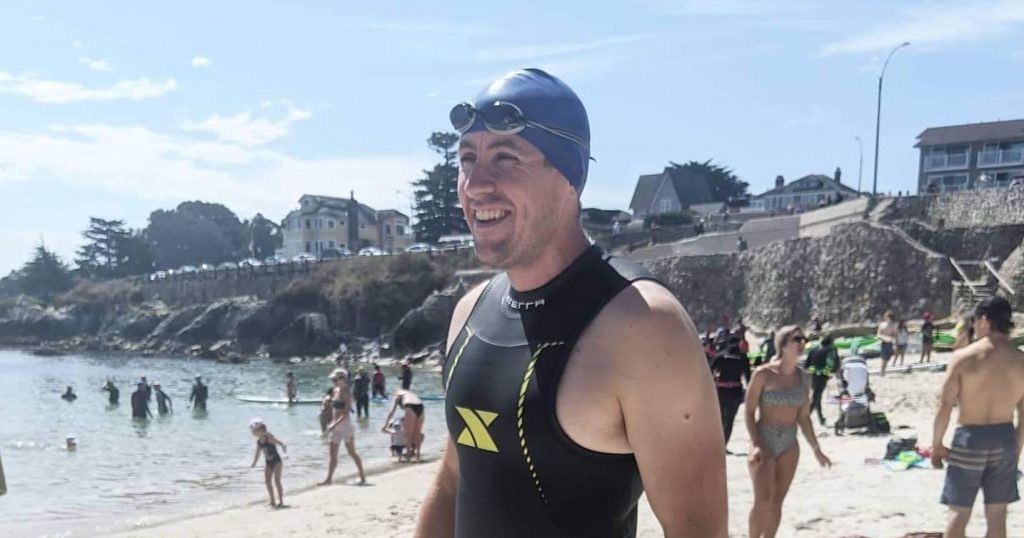 David Woodman ’20 is a cybersecurity analyst with SharpSwitch Technology Consulting Services (Monterey, California), a boutique IT consultancy to government agencies and educational organizations. He evaluates the company’s systems for regulatory compliance, working with the multifunctional teams who implement them.

“I also work with system administrators, policy writers, and managers to improve our security posture,” he explains.

As someone who loves solving problems, applying his analytical and critical thinking, and helping people, Woodman seems a natural fit for IT.

So, it’s surprising to learn that he stumbled onto his career path practically by accident.

In 2014, Woodman had been working for years as a lifeguard and swim instructor, interspersed with stints of office work. “I had taken a programming class and a networking class at the local community college, for no other reason than to learn the concepts a little,” he says.

His roommate’s friend, who worked at a large IT-services firm, alerted Woodman that a position as incident manager had opened up at the firm. Although the job was at entry level, Woodman saw that it entailed communicating with a broad range of stakeholders and developing valuable proficiency in many areas.

“It would uniquely position me to learn a lot about enterprise and IT,” he explains.

Despite his lack of experience and knowledge, Woodman was determined to do well. He pumped his contact for information, getting useful pointers for the interview.

“I knew I had to give it my all,” he says. “I even brought a box of donuts and offered it to the people who were interviewing me.”

He later discovered that he had beaten out his top competitor, an experienced candidate with multiple professional certifications.

“I had no certifications and no experience,” says Woodman. “But they felt I would be a better fit because of my ability to connect with them, and that the energy I brought would be better for the team.”

“It’s no exaggeration to say that it changed my life,” he adds.

In only a year and a half, he was performing root-cause analyses, troubleshooting a wide variety of computer systems, helping clients with enterprise-wide change management, and working with internal and external stakeholders at all levels.

Since then, having held three more IT positions with increasing responsibilities, Woodman says his number-one professional priority is enjoying the people he works with.

“I also have to have work that feels rewarding, and I have to feel that I bring value to what I’m doing,” he adds. “That’s what’s motivated me as I moved from position to position.”

Even with his impressive career success, the one regret that Woodman always had was not finishing his degree at Saint Rose, which he’d started in 2004.

As a high-schooler in his native Seaside, California, Woodman learned about Saint Rose from a swim teammate, Franco Pacheco ’06. “I also went on a recruiting trip with my swim team and had a good interaction with Coach Keith Murray,” he says.

Although he had no strong interest in college, Woodman decided to apply to Saint Rose at the encouragement of his high-school coach. “He looked me in the eye and said, ‘You are going to college, and you are going to swim,’” says Woodman.

He majored in biology. It wasn’t the best choice. “Somehow I had it in my mind that being a science major would be good for me,” says Woodman. “The problem was that I didn’t know what I wanted to do, like most other 17- or 18-year-olds, and I didn’t have the life experience to understand what it would mean to be a science major.”

“They were very kind and thoughtful, but they also wanted you to earn everything on your own,” says Woodman. “That, and the swimming, kept me going.”

But the coursework was extremely challenging, and Woodman struggled. He considered changing majors, but felt dissuaded from switching.

He kept plugging away.

“I stayed four and a half years, and stayed a science major, but eventually dropped out,” says Woodman.

“I really tried, but never finished the coursework, and by that time I wasn’t in a good place anymore: I had all this student loan debt, I didn’t have any careers in mind or lined up, or anything I was pursuing. I needed to start over.

“So I sold everything I owned. I took my two bags and moved back to central California.”

That was 2008. In 2011, Woodman contacted Saint Rose to finish his degree. He submitted a proposal for an interdepartmental degree that combined biology and chemistry.

The proposal was rejected.

“The concern was, ‘Why don’t you just finish the degree you started?’” says Woodman.

He revised the proposal twice, without success, and decided to table the project.

Fast forward to 2018. Woodman got back in touch with Academic Advising Director Jennifer Hankin and the new dean of the School of Math and Science, Ian MacDonald – a computer scientist who recognized Woodman’s considerable IT skills.

“Dean MacDonald offered me the option of combining natural science and computer science,” says Woodman. “That’s when I started putting this idea together that modern fields want people with a broader knowledge and the ability to tackle things from different perspectives.”

Both IT and natural science, says Woodman, require analytical, critical thinking and the application of process.

“So it’s natural for me to fall into cybersecurity work because it’s all about applying frameworks and processes,” he says.

That’s how, a decade later, Woodman found himself working through Chemistry 191.

“Not having taken any natural science in a long time, I had to go back and reteach myself a lot,” he says. “I was a little worried for a while there, but I pulled it off.”

And with the sheepskin came great satisfaction.

“To be honest, that was the single regret I carried over the years – not finishing school,” he says. “It was a huge sense of accomplishment.

“How often do people get the opportunity for a do-over on a regret?”