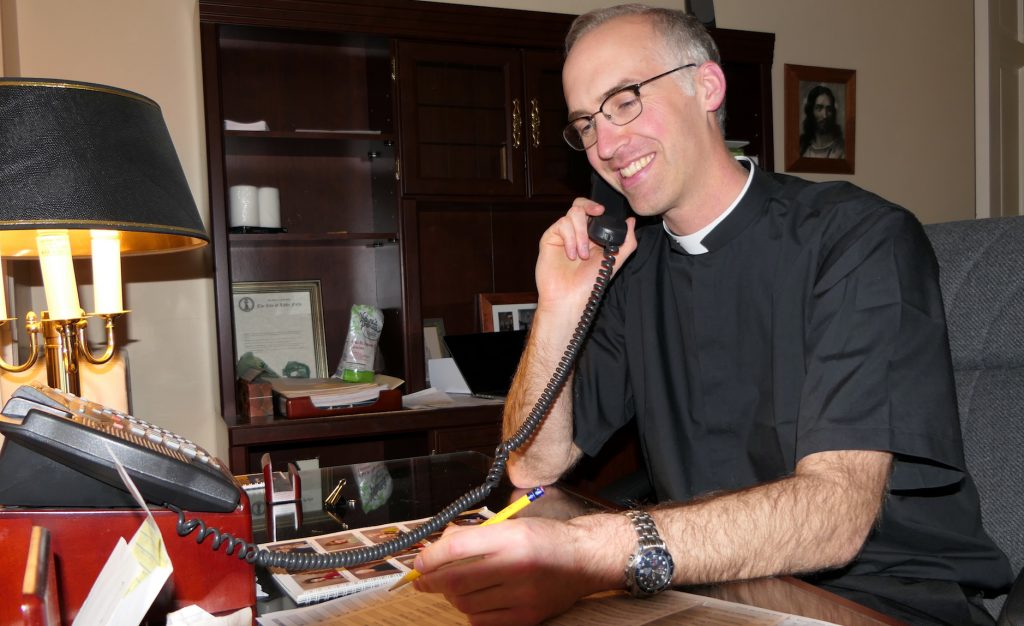 Father Brian Slezak is used to meeting parishioners after Mass with a warm smile and a quick handshake. Now, because of the COVID-19 pandemic, he’s meeting them on the phone. (They can still hear the smile in his voice, though.)

As a matter of fact, there are many parishioners he hasn’t yet met in person. Father Brian was assigned to Holy Family in Little Falls, New York, and St. Joseph’s in Dolgeville, New York, in late February, and celebrated his first Masses there on the weekend of March 14 and 15 – to about one-third the usual congregation. The bishop had declared Mass optional, so the rest of the flock stayed home. “The following Monday, everything was canceled: no daily Masses, no meetings, nothing,” he says.

Stepping up to the challenge, Father Brian has been spending each afternoon in the parish office in Little Falls calling each parishioner individually.

“I started with 10 a day, but it’s been taking too long to get through the list of parishioners, so now I try to call more,” he says. He also stays in touch via email and Facebook and posts weekly YouTube messages.

“My main mission right now is to connect with people,” says Father Brian. “Every day, as a priest, you’re called to mediate between God and people – it’s all about connecting them with God – but first you have to establish that human connection, to be the bridge.”

Not being able to see folks at church is difficult, but Father Brian has found a silver lining.

“When you meet them after Mass, the exchange is very brief and the conversations aren’t very substantial,” he says. “But when I call people, and they really want to talk, the call will last a good 15 to 20 minutes. They will share their life story with me and even some of their struggles. That wouldn’t happen if we weren’t going through this.”

At the same time, he knows they miss coming to Mass and being with one another each Sunday.

“I have challenged them to improve their prayer life at home,” he says. “Routines are good in the spiritual life – pray daily, read a good book, listen to a podcast, watch a good Catholic movie. There is so much to learn about our faith.” For those who wish to get out of their homes, both churches are now open daily for prayer.

This time has also allowed him to find more meaning in his own prayer life.

“I celebrate Mass daily, usually privately,” he says. “So many times as a priest, you’re trying to entertain or impress, and you can get distracted with trying to perform for the crowd. I feel like I’m more focused on God now. I’m totally myself, standing there before Him, and I don’t have any worries about saying the wrong thing or wondering how I look. Offering Mass alone at the altar has reminded me that at Mass we are praying to God.”

In addition, the pause caused by the pandemic is giving us an unprecedented chance to reflect.

“There’s a lot on our shoulders, and sometimes we have to stop and think, what are we doing to stay healthy and grounded?” he says. “We realize we have to support one another.” 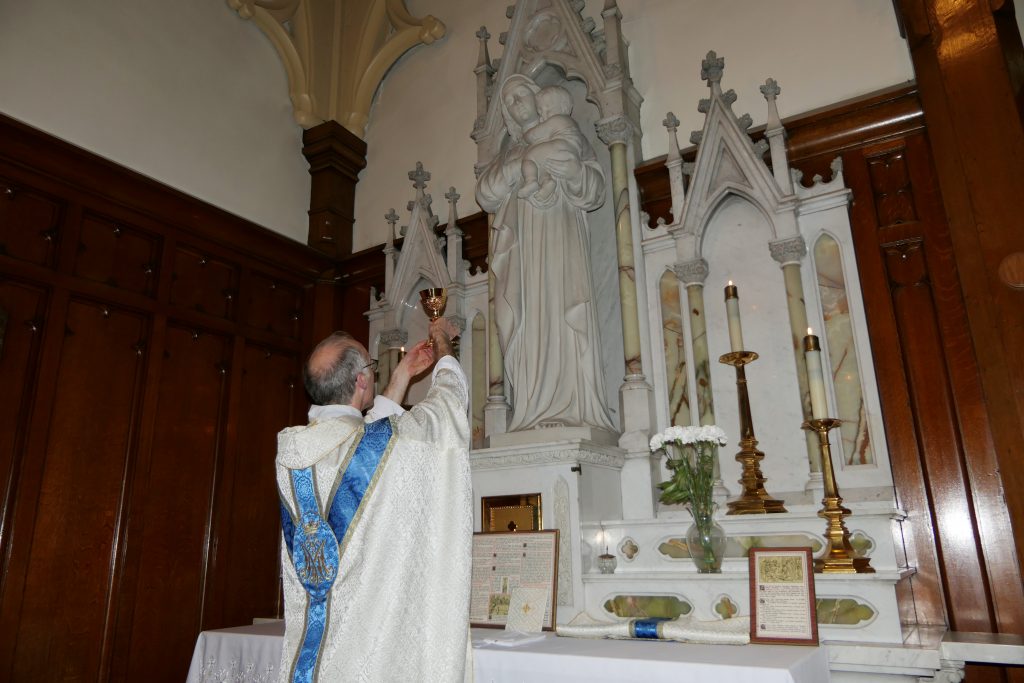 The right guidance at the right time

Before moving to Central New York, Father Brian had been pastor of Holy Trinity in Cohoes, New York, since 2016. When the bishop assigned him to Little Falls and Dolgeville, Father Brian was sad to leave his parishioners but knew that he was being sent because the community needed him.

“They hadn’t had a parish priest in almost seven years,” he explains. “People are filled with gratitude. They are very welcoming and kind, and I’ve come to love it here myself.”

He lives in a rectory in Ilion, New York, with one other priest, and is happy for the company.

“We get along really well, we eat dinner together most every night, and pray together sometimes,” he says. “I’ve come to really appreciate the fraternal support of a brother priest.”

Although the Rotterdam Junction native grew up Catholic and very religious, it took him a while to find his path – with the help of Father Chris DeGiovine at Saint Rose.

“I was kind of adrift. I didn’t really know what I was doing in college – I didn’t even really have a desire to go to college – and I was undeclared for the first two years,” says Father Brian. “I got caught up in the wrong crowd and partied a bit too much.”

In his junior year, a serious-minded girlfriend suggested that he take a theology class with Father Chris, whom he knew from Mass at the Interfaith Sanctuary.

“He was well-read and intelligent, and you could ask him questions without worrying about being judged,” says Father Brian, who ultimately earned a history and political science degree at Saint Rose. He found himself talking to Father Chris after class or at the sanctuary and began spiritual direction with him.

“I started to discern my vocation to the priesthood,” he says. “My girlfriend (who was Protestant at the time) would question me about my beliefs, and I would do my own research, and talk to Father Chris, and try to navigate through all these answers. In doing so, I deepened my own faith. Father Chris was there for me throughout my discernment.”

These days, he occasionally sees Father Chris at gatherings for priests.