Even though Randy Hernandez '07 walks the same halls that Walter Cronkite and Dan Rather once inhabited, he never forgets his roots – Radio Saint Rose, The Chronicle, and Capital News 9 in Albany, New York. 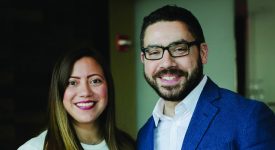 Randy Hernandez ’07 with his finacee Denise

As a producer for CBS News in New York City, Randy Hernandez ’07 is responsible for finding regional stories that the network’s shows – including “CBS Evening News,” “CBS This Morning,” “Sunday Morning,” “60 Minutes,” and “Face the Nation” – will air for their national audience.

“I’m a liaison between CBS News and our affiliates, the local CBS stations throughout the country, as well as our international partners,” he says. “I scope out stories in smaller markets around the country and find a way to tell them on a larger scale.”

He monitors stories the local stations are covering, looking for anything with a strong soundbite, video segment, or interview that could play well for a national audience. He also provides CBS News content to the local affiliates.

As a broadcast professional who’s worked his way up from the local to the national level, Hernandez is perfectly qualified to know if a story will play in New York, Washington, D.C., or Peoria. “In local news, the top stories are pretty straightforward: the biggest political stories or crime stories, for example,” he says. “But for the national news, we have to explain to a larger audience why we should pay attention to something going on in another part of the country, a place that most people may not be familiar with.”

An ear (and eye) for news

Hernandez works the day shift, Sunday through Thursday. On his morning commute, he’s busy scanning his email for leads. “We’re staffed 24/7, so I’m looking at messages passed through later in the evening or overnight,” he says.

He arrives at the CBS News office on West 57th Street before the daily editorial meeting at 9 a.m.

“We’ll talk about what we’re doing here in our newsroom with our correspondents and hold a conference call with our bureaus – say, London, Washington, D.C., Los Angeles – to talk about what’s going on with them.”

The team discusses regional news stories that warrant national coverage, as well as features to be worked on over the longer term.

Then he follows up on promising leads, calling up local stations to request content on stories.

“We can pass the material on to other stations, or take bits and pieces of it for our own purposes, or use it for larger-scale stories,” he explains. “We’ll fulfill requests from affiliates for content from other affiliates, as well.”

At the end of his shift, around 5 p.m., Hernandez writes a handoff note to update the night producer on any outstanding issues or tasks to be done.

Hernandez is one of several producers serving CBS News’ more than 200 national affiliates. He’s primarily responsible for stations in the Northeast and Southwest. Sometimes he goes out on the road to meet the folks at the local stations, putting together names with faces and building relationships.

A home away from home

As a high-school student in his native Brooklyn, Hernandez already knew that he wanted to get into communications. He chose Saint Rose because it was away from home, but not too far.

“I wanted to go to a school where you wouldn’t be a number, with small classes, and where I could have good relationships with the professors (with whom I still communicate),” he says.

Saint Rose was perfect for meeting new people and getting active. In his sophomore year, Hernandez became a resident assistant (RA) and joined The Chronicle, the Saint Rose student newspaper, as a writer. His next year, he was VP of communications for the the Student Association (SA), overseeing everything from the yearbook and The Chronicle to the student magazine.

Hernandez liked the communications curriculum, which early on exposed students to all specializations.

“I enjoyed being able to branch off into whatever you wanted to get into, whether it was marketing, or advertising, or journalism, or writing.”

The Hearst Center didn’t yet exist, so the entire department was in a corner of the first floor of Albertus Hall.

“There were the faculty offices, an old TV studio with mostly analog equipment, two J labs, and a couple of classrooms. That was it!”

“These were seasoned professionals who were passionate about the craft,” he says. “A lot of people today think of the printed word as a dying art, but they made us feel the exact opposite: Printed communications are an actual document of what happened on any particular day.”

The faculty encouraged students to take advantage of the work opportunities throughout the Capital Region. In his senior year, Hernandez interned at Capital News 9 (now Spectrum) for 20 hours a week, working in the web department as well as in the assignment desk.

He also helped launch Radio Saint Rose, which was housed in a back corner of the Hellman Library’s ground floor.

“I hosted a profile show called ‘Inside Saint Rose’ – very original, I know,” he says.

Hernandez had originally planned to focus on radio broadcasting, but switched to television when he found out how volatile radio could be. 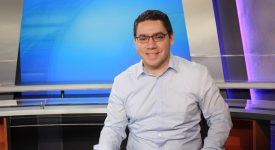 A Hollywood-worthy rise through the news ranks

Just before commencement, Capital News 9 hired Hernandez full time as an associate producer/assignment editor – answering phones, calling the police and fire departments to confirm stories, and writing show scripts. He was quickly promoted to producer, in which capacity he created rundowns for the shows and assigned stories to associate producers.

For the first four years of his career, Hernandez worked the graveyard shift, 2 to 10 a.m.

“We were on the air 5 to 10 a.m. every day, which is a lot of time to cover,” he says. “The show wasn’t live the entire time, but we would have to update a lot, as stories could change during that time.”

All told, Hernandez worked at Capital News 9 from 2007 until 2014. In 2010, he started moonlighting as a DJ at Siena’s radio station, The Saint, a gig he continued until 2014. It was the perfect way to indulge his love of radio.

“I did the Friday night kickoff shows, 6 to 9 p.m., basically doing pretty much whatever I wanted,” he says. “It was a great experience in terms of communications – addressing an audience, producing a music show, editing – a lot of components I really loved.”

In 2014, Hernandez decided to return to New York City (he still visits the Capital Region a few times each year), and transferred to Capital News 9’s sister station, NY1, as an associate producer. “It was a seamless transition, and just involved getting used to local news in New York City: Who are the important players? Why do we care about this story today?”

The sacred duty of recording history

He was promoted to producer at NY1, where he worked until joining CBS News in 2017. His track record got him in the door; his strong skills, news acumen, and drive got him hired.

“To many people who work in local news, it’s a dream job to work at a network,” says Hernandez. “It’s the major league of television. CBS News has a long, storied history. Walter Cronkite, Dan Rather, Bob Schieffer – I’m literally walking in the same hallways as those people.

He loves the feeling of putting together a story.

“We’re all in the same boat, finding a way to get this story out,” he says. “It’s a very satisfying industry that we’re in.

“We are the people who are literally writing the record of history. Fifty or 60 years from now, people may be watching footage from NY 1 or Spectrum or CBS News. And if my name is attached, people will know, hey, he was a part of the story, at this particular time in history.”