Cecelia Martinez ’11 is a junior software developer based in Atlanta, Georgia, with Fusionetics, a movement-wellness tech company. Her degree in communications from Saint Rose took her from reporter and editor, to financial services employee with an MBA, to software development. Her communication skills have helped her in all of those careers, and she’s found a way to parlay her diverse skills into community service, too. 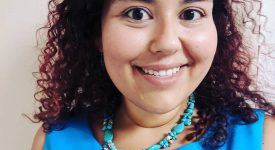 A creative software engineer with great business acumen? A tech-savvy entrepreneur who has an amazing way with people? Or a socially-minded communicator who’s learned to tell stories through computer code?

Call Cecelia Martinez all of the above. After graduating from Saint Rose with her bachelor’s in communications, the former Saint Rose Chronicle editor began her professional career in the Northeast as a reporter and editor. A couple of years later, she began working in financial services and earned her MBA.

Now in Atlanta, Georgia, she’s a junior software developer with Fusionetics, a movement-wellness tech company. “We work with athletes, people recovering from injuries, or people who just want to be able to move better without pain,” she says.

How the technology works: A practitioner, such as a coach or physical therapist, takes video of a patient doing a series of exercises. “Our motion-capture technology finds areas of weakness – you’re doing a squat and your knee turns out, or you’re doing a pushup and your back curves down – and develops a customized program of exercises that help you counteract that, decrease pain, and prevent injury.”

Clients include sports teams, like the Atlanta Falcons; healthcare providers, such as hospitals; and organizations to whom workplace injuries are critical, like firefighters.

Fusionetics’ next offering will be BodyMAP, an app that won’t even require a trained practitioner to diagnose the video. “Anyone will be able to take a video of themselves and get a customized program,” says Martinez. 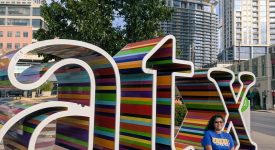 Cecelia Martinez at the Artifact Conference

From analog to digital communications

In her current position, Martinez primarily provides support and keeps everything running smoothly while the senior developers focus on the new app. She also builds out small projects to gain coding proficiency. “We have a small team with a lot to do, so I get exposure to different aspects of development, support, operations, security, and coding,” says Martinez, who enjoys the considerable impact she can have in a small company.

How did the journalist/financial-services professional become a coder? The short answer is: By eating, sleeping, and breathing computer coding for three months at an intensive, full-time boot camp at the Georgia Institute of Technology. The longer backstory is that she had been dipping her toe into programming long before that, beginning with Saint Rose.

“When I was the editor of the Chronicle, we were using a template website, and I switched us to a Wordpress site that we hosted, developed, and ran ourselves,” says Martinez. “I learned HTML, CSS, a bit of JQuery and PHP. It was really fun.”

Over the years, she continued building websites for friends and small-business clients.

“I kept coming back to tech, every job I had,” she adds. In publishing, she worked on an interactive walkthrough using Flash and other software tools. In financial services, she helped troubleshoot and support iPad apps.

At the same time, Martinez continued to hone the skills she’d acquired earlier in her career: communication, management, working with different types of organizations, and networking.

The move to software engineering was a gradual and logical transition, rather than a hard pivot. “When I was at Fidelity Investments working on iPad apps, I found myself collaborating with the developers about how they worked; I saw it was a lot more creative and oriented towards problem-solving than I had thought,” she explains. “When I think of math, I think there’s one answer, and that’s it. But in development, I found out, there are a lot of different approaches. 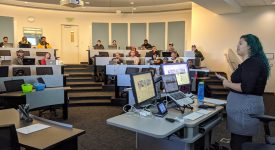 More than the sum of the parts

It was her combination of great communication skills and solid programming capabilities that made Martinez stand out to prospective employers. For this, “I want to give a shout out to Saint Rose career services,” she says.

“When I was a senior, we did a communications wrap-up class where we did mock interviews, resume writing, and portfolio building,” she says. “To this day, everyone tells me that my interviewing and networking are fantastic.”

She finds herself coaching others on how to differentiate themselves and leverage their background. “That was especially helpful to me as a career-switcher because I had to say, ‘I know I’ve done two different things already, and I’m trying a new thing – but this is a good thing!’” she adds.

“Someone asked me how I learned all this stuff, and I realized I had spent that semester on learning to get a job, networking, and interviewing.”

Strong “soft skills” greatly differentiate Martinez from the majority of job applicants – the stereotyped introverted programmer huddled in a dark corner: Within a week and a half of finishing boot camp, she was entertaining three job offers.

She’s found a great way to parlay her diverse skills into community service, too. Martinez is an energetic volunteer for Women Who Code, a nonprofit organization that encourages women in technology careers. She’s also a cofounder and leadership-team member of the brand-new Atlanta chapter of Out in Tech, a national nonprofit focusing on the LGBTQ tech community. Out in Tech Atlanta is gearing up for its second event, this December.

“Something like 42% of people aren’t out at work because they don’t have the institutional or company safety to do so,” says Martinez. “So, we’re about promoting companies that have good systems in place and are inclusive, helping people find companies that welcome them, offering tips to help navigate the workplace, and providing a safe space to share their experiences.”