Tim McAuley ’01 shares his amazing and heartwarming story about one of his earliest memories of Saint Rose – and the story of how, many years later, that first encounter launched his journey from anxious prospective student to the accomplished, confident environmental entrepreneur that he is now. Today, he continues to live the values of Saint Rose, using his talents and energy to help make the world a better place. 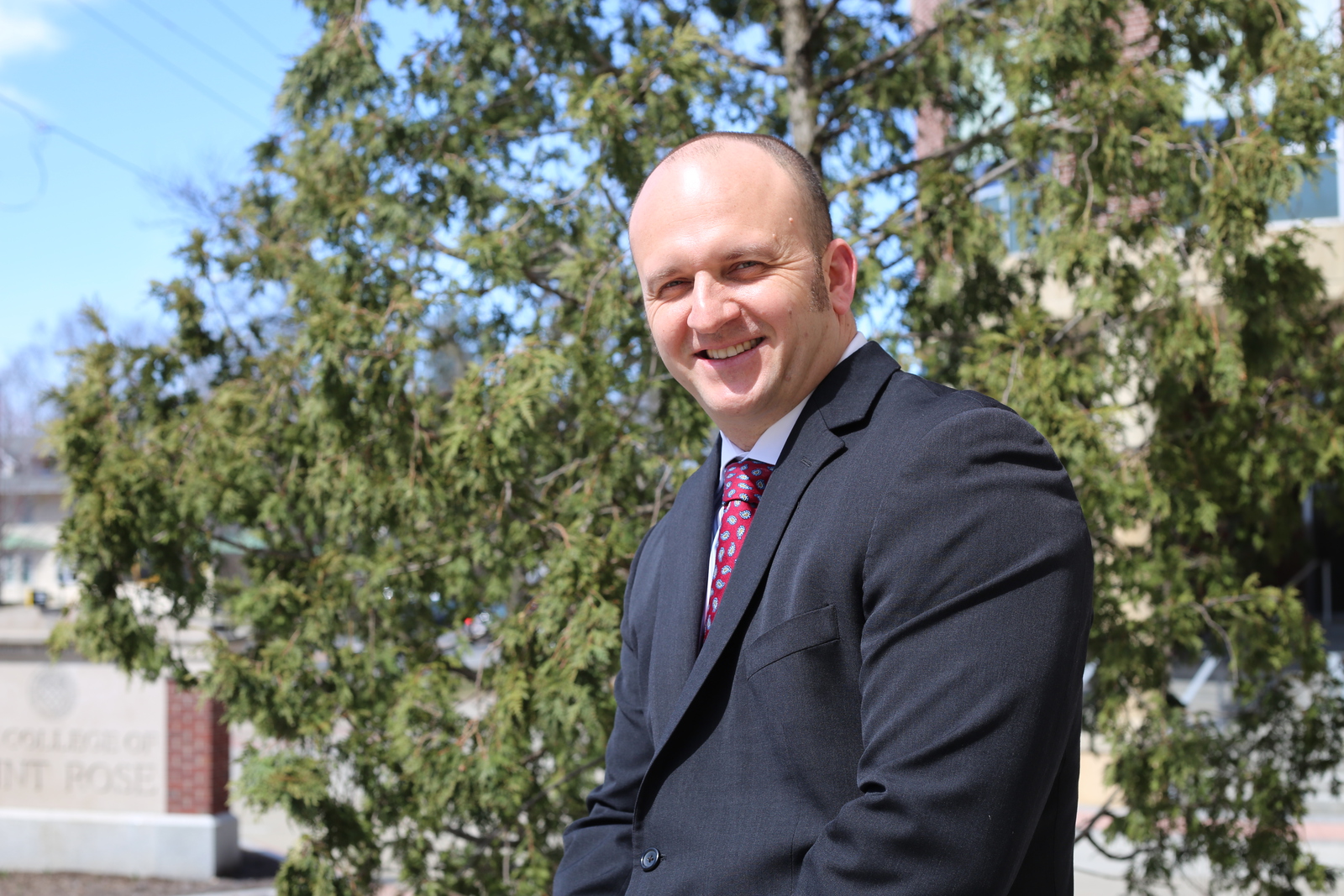 Tim McAuley believes strongly that, if you listen to what your gut is telling you, things will work out for the best. He cites one of his fondest Saint Rose memories to prove his point.

In 1996, McAuley was a 22-year-old prospective student visiting Saint Rose to interview with an admissions counselor.

He had just spent the last three years serving in the U.S. Navy as a radioman. He had earned a perfect 4.0 grade-point average upon graduating Radioman “A” school in 1993. However, his high-school transcript was less impressive, and McAuley wasn’t sure his academic record alone would convince the counselor that he had what it took to succeed.

To strengthen his case, McAuley had taken steps to demonstrate his dedication and seriousness. “I had prepared a folder with the application fully typed out, including the entry essay, and all my letters of recommendation,” he says. “I was wearing a suit to make a solid first impression. I was so ready to get things going, but was so unsure of the outcome.”

Nervous as he was, he had a feeling that things would turn out right.

When he arrived at admissions, he learned the counselor had called in sick that day. So Vice President Mary Grondahl stepped in to do the interview.

“Mary provided such a level of comfort that the meeting turned into a real interaction,” McAuley says. As they wrapped up the interview, Grondahl offered him an application. He handed her the folder, with everything prepared. Grondahl already had a read on his qualifications and told him he’d be getting a letter in the mail.

“I remember walking out feeling so happy, feeling that everything that I wanted to happen was now becoming a reality,” he says.

Today, that nervous prospective student has three diplomas on his wall: a B.S. in Biochemistry from Saint Rose, an M.S. in Chemistry from Clarkson University, and a Ph.D. in Environmental Science and Engineering from Clarkson. A confident, accomplished scientist and entrepreneur, he is (the) founder and owner of CHANGE LLC, which provides strategic environmental leadership and consulting, through partnerships with firms from the Pacific Rim to South America. About to celebrate its 12th anniversary, CHANGE develops solutions to remediate and minimize pollution, deal with global climate change, and safeguard human health.

For example, one current project involves a system for removing pollutants from ships’ emissions. Ports can be a significant source of air pollution, says McAuley, who cofounded a company called Clean Scrub Technologies, based on a patented system to sequester and eliminate nitrogen dioxide and carbon dioxide.

“Our client was very interested in installing these systems on their ships,” he explains.

McAuley’s path to entrepreneurship originally began more on the scientific side. After finishing his bachelor’s at Saint Rose, he went to Clarkson to study chemistry. But, feeling that a traditional chemist’s life wasn’t for him, he changed to environmental science and engineering – a brand-new major that Clarkson had just introduced – for his doctorate.

“You had to be able to set up a study, collect the data, evaluate your findings in terms of effects on human health, and be able to look at all the toxicology behind that,” he says. “That has a really good correlation with my work now, because air pollution isn’t just about what’s outside the body, but also the impacts and mechanisms it has inside the body.”

McAuley discovered his natural affinity for the business side quickly.

“As a committee member sitting on several National Academy of Science panels, I got to know other global leaders in the environmental arena,” he says.

His expertise and capabilities were quickly noticed by municipalities in Asia. One early project, for example, involved assessing lower respiratory illnesses from pollution in Ho Chi Minh City, and was funded by the Asian Development and World Bank. That led to many more years of contracts, clients, and successes around the world.

“I’m out there meeting people, engaging, building relationships, and building confidence with clients,” he says. “They’re looking for someone who has not only the science and the knowledge, but who can take this very high-profile environmental project from start to finish. I find I can do that very well.”

Even with all the credentials on his wall today, McAuley remembers how he struggled to earn enough to pay his tuition and bills.

“I had a compressed schedule, with the G.I. Bill that didn’t cover half my expenses, and that only for three years,” he says (he finished about a year before the rest of his class). “It was summers of 40 hours per week doing landscaping, winter breaks spent stacking wood and shoveling, nights working at Glens Falls Hospital and Albany Medical Center. Even more hours were spent in intense work study with Professor William Hagan – work that helped Saint Rose obtain a $500,000 NASA grant as part of a consortium with the University at Albany and RPI.

“It wasn’t the typical college process that people think about,” adds McAuley. “Being a little older than my classmates, having lots of life experience, and having traveled all over the world before I went to school, it was almost like a generational gap.”

These days, he stays engaged with Saint Rose in multiple ways, including serving on the Board of Associates since 2012. He drops by campus occasionally to see how things are going, and always looks in on Grondahl, now senior vice president for strategic initiatives.

“Her interviewing me because the counselor was out – that was such a twist of fate,” McAuley marvels. “They could have told me to come back the next day. They could have sent me to another counselor. But it happened the way it did. Things could have been so different, and I could have gone somewhere else, had a different career.

“But that path forged itself from the start. All I had to do was listen.”