From an internship at the Times Union Center when she was a Saint Rose student, to a post-graduation job launching the Albany Empire, Sara Biancosino '17 translated her winning work experience into an exciting career with the NFL's Washington Redskins. 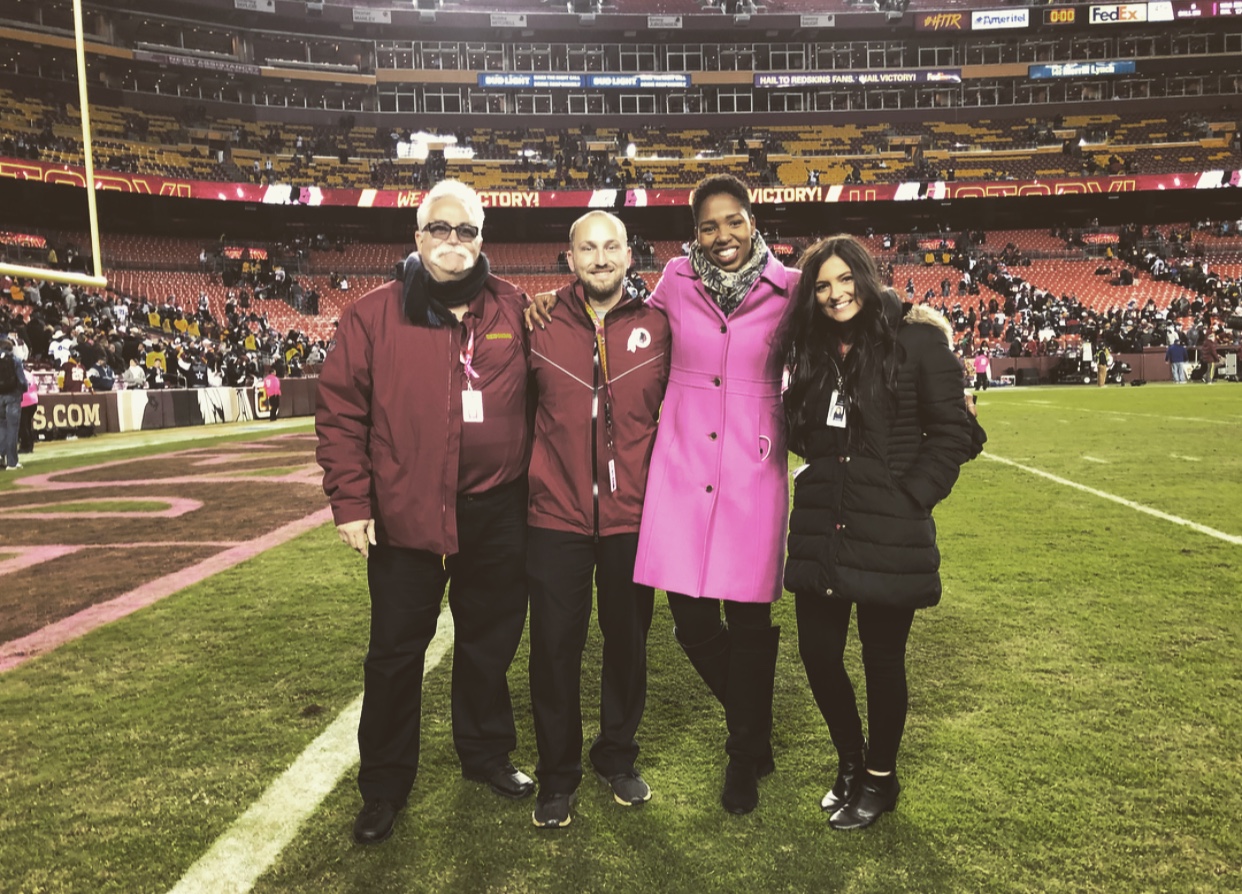 Ever wonder who coordinates the cheerleaders, marching bands, and special performers for National Football League games? Who produces the scripts and video vignettes showing the personal side of your favorite players? Who ensures that every little detail of each elaborate event goes off without a hitch?

Meet Sara Biancosino ’17, game entertainment manager for the Washington Redskins. On a daily basis, she’s responsible for everything from audio and video content and pyrotechnics, to booking and handling entertainment, to overseeing all groups on the field, to managing the social media accounts of the cheerleaders and FedExField (the team’s home field, capacity 82,000).

Impressive for any industry professional, not to mention for someone only two years out of college. But Biancosino has done nothing but impress since her first day at Saint Rose, originally as a transfer student from SUNY Schenectady (SCCC).

The Albany native, who had spent a year at SCCC in music business/general studies, began at Saint Rose majoring in music industry in Fall 2014. “Throughout my entire life, music was my one and only passion,” says Biancosino, who still loves to sing. “When The College of Saint Rose provided a platform and major that highlighted my passion, it felt like home.”

She loved the program: coursework, students, facilities, and teachers. But she was having doubts about her major. “My ambitions to one day own my own music business began to take over,” she says.

She realized that she wanted to learn more about business and finance. After spending the semester immersed in music industry, Biancosino shifted to business administration with a concentration in marketing.

She accelerated her pace to make up the core coursework she had missed – while working three jobs. “Business became my second home, as I pushed myself to new limits, finishing projects and excelling in courses I never thought I’d see myself taking,” she says. She graduated with a GPA of 3.8 and was named the top outstanding senior in business at Saint Rose.

One of Biancosino’s jobs ended up paying huge dividends down the road: a marketing internship with the Times Union Center in downtown Albany. There, she received valuable guidance from the facility’s leaders, including SMG general manager Doug McClaine ’97 and marketing manager Maggie Zmuda ’06.

“The TU Center works with some of the greatest acts and sporting events in the country,” says Biancosino, who worked concerts, sports events, trade shows, and press conferences and wasted no time learning to use programs like Photoshop and create content for conventional and social media. 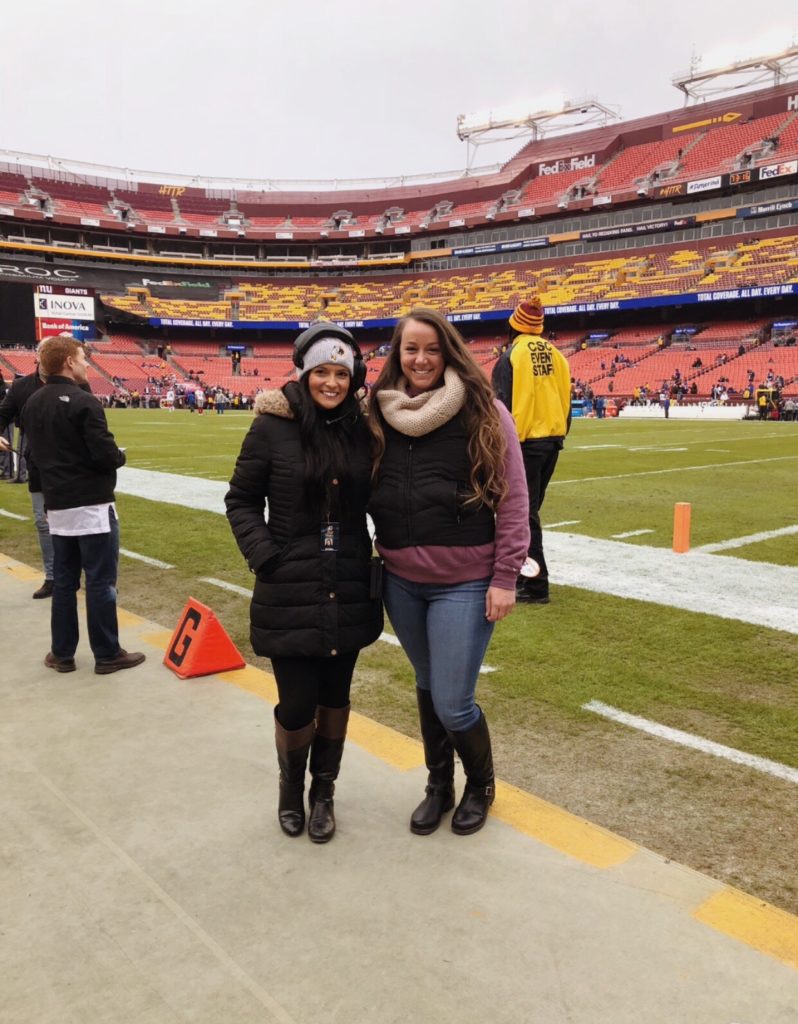 Shortly after graduating in 2017, Biancosino discovered that Albany’s arena football league (AFL) team was being resurrected. Although she knew little about the sport, she decided to apply to a few openings.

In short order, she found herself hired as game operations and marketing manager. “I was petrified of the career path I had just chosen, but something felt right,” she says. “It was local, it was going to be big, and it was giving back to the community.”

When she started in Fall 2017, the team had few office supplies and no logo, team name, or colors. In less than four months, she was conversant with all aspects of arena football management and production, and the Albany Empire was a force to be reckoned with. “We transformed as a team: By the end of the 2018 season, we led the league in attendance, entertainment, and team standings,” says Biancosino. “It was the best experience of my career, and without that growth, I would not be where I am today.”

Managing the game operations and marketing of the Albany Empire (which won the AFL championship this month) was big, but she wanted something even bigger. As the 2018 season wound down in August, she applied to the Redskins through an online hiring platform. Although she had no expectation of receiving a call, her stellar resume caught the eye of hiring managers.

“Within a week, I heard back and began the interview process; within a month, I was living in Maryland and working out of FedExField, right outside of D.C.,” she says. “I began my first day with the Redskins just six days shy of their home opener.”

Biancosino is heading into her second NFL season with the Redskins – and having a wonderful time.

Without her Saint Rose experience, Biancosino believes, her career path would have been quite different. “Saint Rose was the platform I needed to grow as an individual, and led to opportunities I may not have received if I had gone elsewhere,” she says.

She developed crucial organization and time-management skills in her business courses. “I still have the notebooks I used in many of my courses, knowing that one day I will own my own business, and will have the skills to take with me, wherever I go.”

Beyond her academic experience, Biancosino cherishes the relationships she developed at Saint Rose. “As a transfer student in my sophomore year, I was afraid it would be difficult to find friends; but within a few weeks I made connections with people I still care for,” she adds. “The personal relationships I developed mean more to me now than ever before, as each piece of advice has assisted me in my daily life.”

Some of that valuable advice? “Take all you can from each experience, good or bad. Learn and grow from every positive and negative situation,” she says. “Never give up on yourself, and don’t be afraid to apply to that job out of fear of failure – do it anyway. Those hardships prepare you for the future and the difficulties that lie ahead.”