After more than 30 years of feeling uncomfortable in her own skin, six years of working toward her true identity and managing details as large as informing her wife she was no longer a “he” and as small as changing her driver’s license photo, Renate Hartman faced one last, really big hurdle. Her voice.

“I can show you pictures where people would have thought I was female, except when I started talking in this deep baritone,” recalled Hartman, 80, a professor emeritus at Binghamton University School of Management. “In shops, when I’d ask for the dressing room, I’d get long, mean looks. Over the phone people didn’t think it was really me.”

This was more than a decade ago, well before discussions about transgender rights were common. Hartman’s options were not promising: strain to imitate a recorded female voice; work with a therapist with little understanding of her unique needs, or continue speaking in a voice that no longer matched.

But a transgender voice modification group was taking shape at Saint Rose. In 2012, about halfway through her journey from Richard to Renate, Hartman enrolled.

Over the course of a year, she learned to open her vocal mechanism. She learned that women speak from the diaphragm, men higher up, near the chest. Hartman also learned to sit cross-legged and use her hands while talking (both more frequent among women), and to laugh a bit more gently. 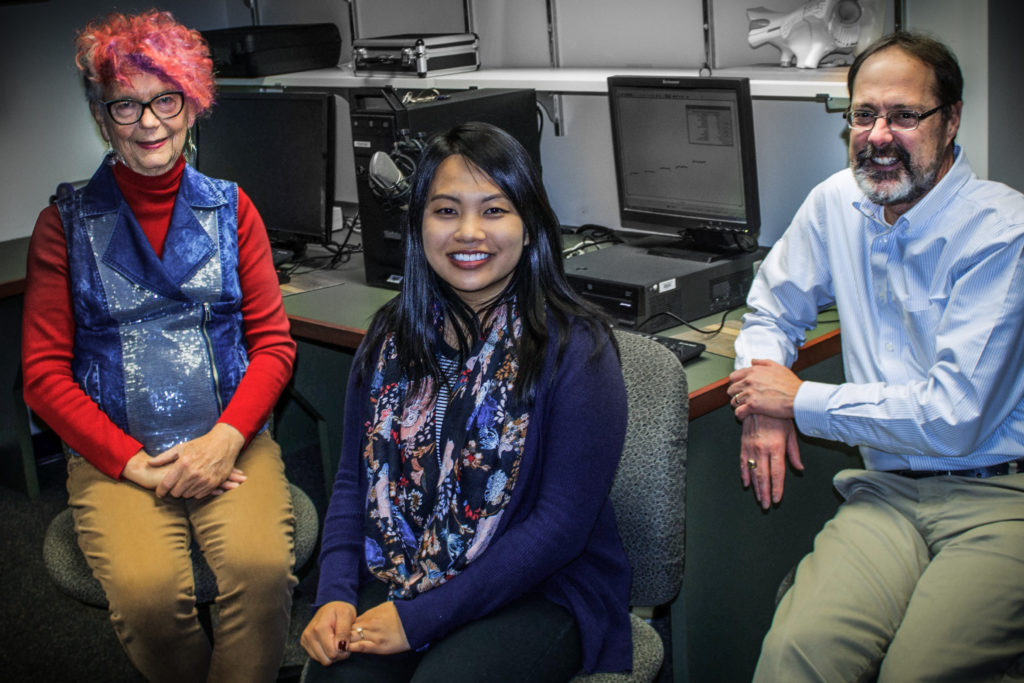 With guidance from the program’s speech and language pathologists, Renate emerged speaking in an alto, a full octave higher than Richard.

“I wouldn’t be who I am today without the program,” she said recently, from her home in Albany. “It was the final touch.”

The College’s transgender voice modification group is entering its 10th year and about 90 individuals have now taken part, often traveling an hour to get here. In addition, 160 Saint Rose graduate students in the Communication Sciences & Disorders program have developed clinical skills, and the cultural competence needed to do the job well, by assisting in the weekly groups in the College’s Pauline K. Winkler Speech-Language-Hearing Clinic.

Jack Pickering, the 24-year professor of Communication Sciences & Disorders who co-founded and directs the transgender voice modification program, says it is work that balances science, psychology, and theater.

“You’re taking a flute and making it play like a piccolo. You’re trying to make the instrument play differently – not to treat a problem, but to help enhance a person’s identity,” explained Pickering, a practicing speech-language pathologist, who writes extensively and presents worldwide on transgender voice modification.

During the two-hour groups, the transgender women take part in mindfulness, then do vocal warms-ups that help them gradually change their pitch from, say, a C note up the scale to a G or A. Often aided by a piano app, the clients then work individually with a graduate student to, essentially, make the vocal folds “play” higher notes without undue tension or strain. They work, as well, on inflection. Sessions end with a group conversation and expressions of gratitude. Participants need to practice at home.

As they do all this, they are also actively deciding on a voice. A 6-foot-tall woman, for example, might choose differently than a petite one.

“Ultimately, the goal is an authentic voice,” Pickering explained.

To illustrate, he played “before” and “after” audio clips. The speaker’s voice is only a note or two higher in the latter. But the inflection and pitch are so different that the recordings might have been made by two different individuals.

Voice modification clients – predominantly women, since transgender men often take testosterone that lowers the voice – also find a comfortable space in which to transition. Some have come out publicly; others arrive in male attire and change, or put on makeup.

“Their voices are changing and they start to dress differently. They might come here in a button-down shirt, and then they pull back their hair, and you see a beautiful pair of earrings. Their body language is more confident, more feminine, and the change is suddenly really big,” said Ann Nguyen, a graduate clinician.“You’re seeing people who have been living two lives, while others navigate a new identity. It’s our job to be supportive.”

Like many students involved, Nguyen was nervous at first. She read a great deal about the culture and challenges of, and within, the transgender community. She learned to ask clients questions. The experience netted rewards.

“I worked with a client who finally decided to make her first phone call at work in her female voice. She said, ‘As soon as I did that and opened up, I felt a lot happier,'” recalled Nguyen, who will complete her master’s in the spring. “I was really happy to be there for that part of the journey.”

“There were times when it was difficult even to know the proper pronoun to use, and I wanted to be careful about what to say or what not to say,” said Petrovich, who will also graduate in the spring. “But the clients knew we were students who were really open to learning, and they were really open to helping us. I love that this is has been part of my graduate education.”

The program started in 2008, when Arlene Lev, a local mental health counselor, told Pickering about a few transgender clients who were unable to find assistance modifying their voices. He agreed to help, though he had never worked with transgender individuals. His research quickly showed the need for a group.

“The program was perfectly consistent with the mission of the Sisters of Saint Joseph, to help thy dear neighbor,” said Pickering who started the program with Dan Kayajien, G’06, then a recent graduate student and now a speech-language pathologist at Albany Medical Center.

They held an open house and wondered if anyone would show up. Seventeen people did. Today, the program is consistently full.

Over time, Pickering has shifted his assumptions about the existence of just two genders, and he has come to see the work in a cultural framework. He has seen clients lose their homes and jobs when they went public, and sees the distress many experience when they live in a way that is not authentic. Even so, Pickering notes, his transgender clients have continue their lives as professors, principals, public servants and caregivers to their families.

“They don’t suffer from a pathology – they are smart, thoughtful, creative people often under significant stress,” Pickering said.

A member of the World Professional Association for Transgender Health, he advocates for health care for people with nonconforming gender identities. Pickering believes students are paving the way. At a talk he gave at Columbia University, the audience broke into applause when he said that 160 Saint Rose students had helped transgender people modify their voices. Many, he notes, have gone on to start their own programs.

“This is the most important clinical work I’ve done,” he said. “It’s fascinating, and it satisfies the mechanic in me, the artist in me, and the human in me.”