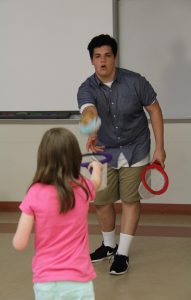 Aidan Jones in the movement room.

May 30, 2017 — Aidan Jones is a tall 14-year-old.  On a recent Friday night, children who were about half his size showed no mercy as they flung foam balls at his arms and neck and close to his eyes. Some instead tossed the balls into butterfly nets, or wore the butterfly nets on their heads.

“This is the movement room,” explained Aidan, who did not flinch.

The movement room was one of 25 classrooms in Albertus Hall dedicated to Friday Knights, a program for children with autism, and the kids were releasing their energy after a long week at school.

Aidan has been coming to the program for half his life, though he doesn’t have autism. He started at age 7 because his grandmother, Dana Abbott, a Saint Rose special education professor, was helping run the program and she took care of Aidan on Fridays. He continued because he liked it and, last year, at age 13, he was promoted to counselor.

“I feel that it blurs the lines,” Aidan said shyly, asked what he has gotten out of coming for so long. “You don’t see the separation between people as much. You start to see people as more the same.” 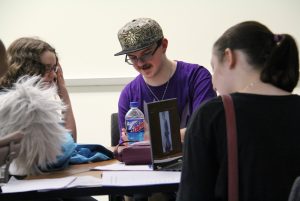 Nate Palaski works with other participants writing scripts for the theater group.

The lines also blur in the Friday Knights theater room, where Nate Palaski, 19, reviewed scripts with a group of children and teens before they performed their skits. All evening, the actors surrounded him with questions and suggestions. When it was his turn to perform, they laughed loudly.

“This is one of only two places where I feel comfortable and am not worrying about something, I’ve done it so long,” said Nate, an aspiring voice actor with Asperger’s syndrome who was recently promoted from Friday Knights participant to counselor-in-training.

The Friday Knights recreation and social intervention program was started at Saint Rose in 2004 so that kids who often don’t fit in elsewhere can feel free to be themselves. Five times a semester, nearly 200 children from pre-school through high school get to play games, create music and art, perform, explore science and history, dance, swim or just throw foam balls.

The brainchild of special education associate professor Susan DeLuke, the program is devoted to the idea that all kids deserve fun – and that all young people with autism can have relationships and develop social skills if they are given the right supports.

Friday Knights participants have gone on to jobs and college, armed with social tools that they gained here. Their parents, who meet in a separate room, have formed friendships and learned about valuable services. And, hundreds of Saint Rose students who supervise in the classrooms have fanned out as teachers, psychologists or speech and language pathologists. The program spawned a similar one in South Carolina, and DeLuke believes there is great potential for more replications.

“The impact is really simple: we’ve been able to touch the lives of so many children and families,” she said. “Our numbers have gone from 30 or 40 to 185 or 200 over the years. That’s thousands of families that have come through our doors. It boggles my mind sometimes.” 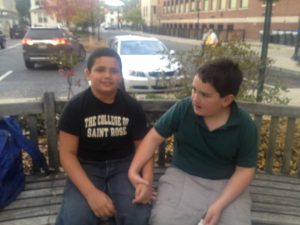 Aidan Jones and Pedro Guevara-Fratianni then…

But Friday Knights has special resonance for individuals like Aidan and Nate, who grew up with it. Whether they have autism or they do not, the people who take part year after year become leaders, broaden their perspective or simply make a friend.

For Pedro Guevara-Fratianni, 14, that friend is Aidan Jones, whom he has known since they both started at age 7.

“Aidan has lit up Pedro’s world ever since they met and they have stayed close friends,” said Pedro’s mother, Catherine Fratianni Guevara, who works as secretary to the dean of the Lally School of Education. “Without Friday Knights, Pedro and Aidan would not have met, and both boys have gained from the friendship.” 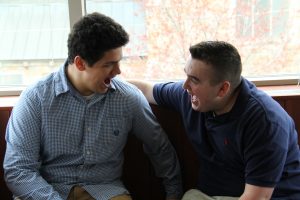 A quiet child who loves swimming, baking and music, Pedro was diagnosed with autism at age 3. Aidan, an aspiring artist who enjoys football, looks forward to 10th grade at Niskayuna High School.

As children, they traveled through the Friday Knights classes together and Aidan found it difficult to believe Pedro had a disability. That reality revealed itself as they grew, but the divide in their abilities has not separated them.

The boys share a code – a wide-mouthed guffaw that makes them laugh – and a routine: before Friday Knights, they often have dinner together in the Camelot Room; afterward, Pedro helps Aidan clean up the movement room. Aidan’s grandmother gives Pedro and his mother a ride home so they can review the evening.

While Pedro doesn’t say a lot, Aidan is aware that he understands everything going on around him. And Aidan has grown to appreciate how well so many people communicate using facial expressions.

“People say I draw their expressions in my work,” Aidan noted.

Abbott, Aidan’s grandmother, has taught at Saint Rose since 2004, specializing in early childhood special education. Taking part in Friday Knights year after year and observing her grandson and his good friend, she says, has broadened her scholarship in the field. 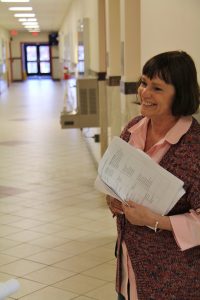 “As a society,” she added. “I think we have gotten more tolerant.”

Still, the path is a long one for people on the spectrum. When Nate attended Friday Knights for the first time as a fifth grader, he couldn’t talk to anyone and made this known by throwing a sweatshirt over his head.

“Someone who became a good friend of mine ripped it off my head,” he recalled. “We started talking immediately.”

Today, nine years and dozens of shows later, he is a leader for other young people with similar challenges. Watching Nate work in the theater, it is hard to believe his assertion that he is usually anti-social and finds friendships challenging. He is pushing himself, taking film and English at Saint Rose.

It does him good to hear that in the theater room, he shines.

“I’ve noticed that happening in here,” he said when told that kids seem to gravitate to him. “One year a kid came up to me and said he started at Friday Knights because he saw me on stage. Here, you can be whatever you want to be.”

— By Jane Gottlieb; Photos (except young Aidan and Pedro) by Ben Marvin