ALBANY (May 13, 2017) — From adolescence in Zambia, Edson Chipalo laid plans to enter the classroom and immerse himself in his studies, even as he scrambled to light his house and feed himself.

As an 8-year-old growing up in the South Bronx, a brain aneurysm almost cut short Patience Cournoo’s young life. 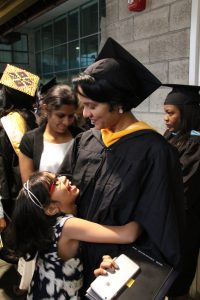 For two years, Swathi Thatiparthy has missed the feeling of her 7-year-old daughter’s arms wrapped around her, as Swathi left her child at home in India to study at Saint Rose.

They along with more than 1,500 of their classmates rejoiced in their resilience and willpower as The College of Saint Rose celebrated its 94th Annual Commencement.

In a ceremony today at the Times Union Center in Albany, New York, Saint Rose awarded bachelor’s and master’s degrees and certificates of advanced study from its School of Arts and Humanities, Huether School of Business, Thelma P. Lally School of Education and School of Mathematics and Sciences.

More than 6,000 graduates and families, plus Saint Rose faculty and staff, cheered on the Class of 2017.  Today’s degree recipients hail from 18 states and 22 countries.  They join more than 42,000 alumni of Saint Rose living in 49 states, the District of Columbia, Guam, Puerto Rico, the U.S. Virgin Islands and 35 countries.

Eve Burton, senior vice president and general counsel of Hearst, received an honorary degree as approved by the board of trustees and delivered the commencement address.

The College also bestowed the Carondelet Medal, its highest honor, on Sister Charleen Bloom, CSJ, Ph.D. for her extraordinary service to Saint Rose and the world community. 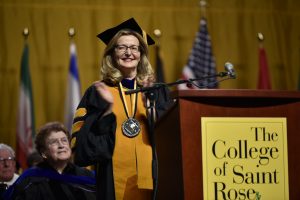 Saint Rose President Dr. Carolyn J. Stefanco said the College could be proud of its expanding global and ethnic diversity and the growing number of students who have taken a non-traditional path to higher education.

“In addition to coming to Saint Rose from many places across the globe, students graduating today had wide-ranging experiences before joining the College,” said the president, who stood before the dozens of flags of the countries of origin represented by the Class of 2017. “Some of you were accepted to Saint Rose while you were in high school; others of you transferred from community colleges.  Some of you served in the military before coming to Saint Rose, and we are grateful for your service to our country.” 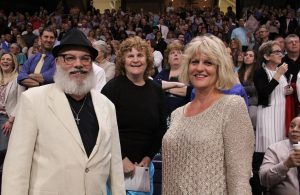 “He had to wait six years because of his service,” said his mother, Deborah Williams. “He was on the USS Cole and was in places where we didn’t know where he was.  We were so afraid the whole time and are so thankful. We had so many prayers for him.”

In a 30-year legal career, Burton has upheld the rights of scores of journalist to uncover the truth.  In her address, she urged the graduates to be their own investigative reporters, especially in an age of “fake news” and false versions of the world. 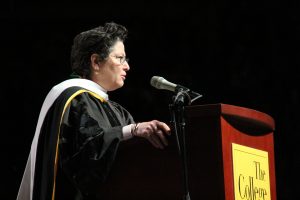 “Our republic needs the energy and talent of the Class of 2017 to take on the issues of our time armed with facts. Be it climate change, medical advancements, scientific research, vast income inequalities, persistent racial and gender barriers, the threat of never ending wars, a balanced federal budget or an upgraded infrastructure, you are our best hope for a better world. Armed with facts, and guided by the moral education you received at Saint Rose, you are supremely qualified to challenge power with facts,” Burton concluded.

In a distinguished career at Saint Rose and beyond, Sister Charleen Bloom, CSJ, Ph.D. has improved the lives of countless individuals who stutter or experience other communication disorders.  Sister Char, as she is known, helped develop the College’s world-renowned program in communication sciences and disorders. In addition to building undergraduate and graduate offerings and expanding clinical opportunities for students, she is widely known for seeing that the whole individual is considered when treating a communication disorders such as stuttering.  Sister Char’s pioneering workshops on stuttering have become a national model. 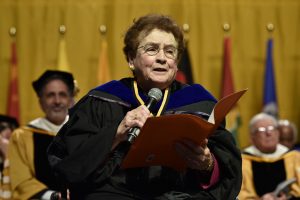 She said earning the College’s highest honor had given her an opportunity to reflect on her career and her “three families” – her biological family, the College and the Sisters of Saint Joseph of Carondelet.

“Today, the Sisters aim to be at the cutting edge, to help every kind of neighbor and to be bold and to go off the beaten path for ‘thy dear neighbor,’” Sister Char said.

The J. Spencer and Patricia Hunter Standish ’50, G’57 Endowed Chair in English honors the accomplishment of an English faculty member demonstrating exceptional scholarship through a research project designed to enhance the learning experience of students in the College’s English Department.  The chair honors Patricia’s lifelong commitment to the study and teaching of literature and the continuing values of English study in the 21st century. 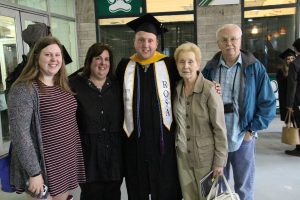 “I never had the opportunity growing up to go to college,” said Lisa King, who is an aide in a special education classroom. “I wanted my children to have every opportunity in the world.” 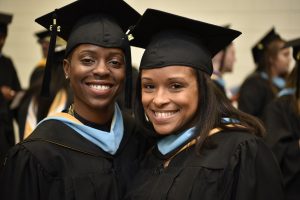 Precious and Paola Garcia were beaming after receiving their master’s degrees in educational psychology. For them, Saint Rose has represented a community, a strong academic home – and a love story. Though the two had each earned an undergraduate degree here — Precious in criminal justice, Paola in Spanish/adolescence education —  they had not met until returning for graduate school. It was love at first sight, they said, of the day they met on campus. Same-sex marriage was not the law in New York when they started the program, but soon became so. The pair married last summer aboard the Dutch Apple cruise ship. On Saturday, they did not sit together, despite sharing a last name.

Danielle Tompkins is as much a fan of Saint Rose as is her daughter.

“I remember when I took the campus tour for prospective students, how kind you all were,” she said. “Maureen was talking to everyone and handed me her card with her phone number and said ‘If you have questions, please call even if you don’t come here.’ That really stood out.” 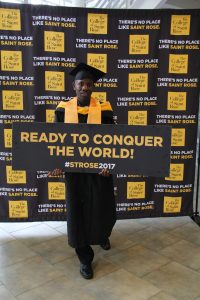