November 17, 2016 — The second time the class met, the students did a much better job of presenting themselves to prospective employers, hitting the key points about their qualifications and discussing their military backgrounds without overdoing it.

There was Jayson Overocker, who served six years in the Air Force and is pursuing a five-year accounting and MBA degree at Saint Rose. There was Jordan Powell, a seven-year Army veteran and Saint Rose computer science student. And there was Raghunath Rathore, who serves in the Army National Guard as he studies accounting at Hudson Valley Community College.

“It was much more crisp this time,” their teacher, Michael Abrams, said to all three, and then to Rathore: “You have a great story. Your family emigrated from India and you were so grateful to this country you decided to serve. We just need to get you to tighten it up.” 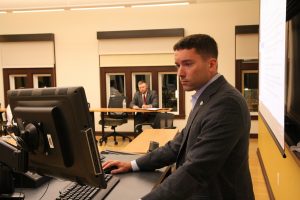 A veteran of the Marine Corps, Abrams knows only too well that the skills service members come home with, ranging from the highly technical to the interpersonal, don’t always translate to the civilian employment sector. His own difficult transition after returning from Afghanistan led him in 2011 to launch FourBlock.

The non-profit both helps veterans fine-tune their career skills and enlists companies eager to hire them. About 500 veterans have gone through the program, and many have accepted jobs at Google, Facebook, Amazon and PricewaterhouseCoopers.

Now, FourBlock has made Saint Rose its anchor for upstate New York. The decision to locate here is both an honor and an opportunity to help turn around a troubling employment picture.

“Number one, it shows that Saint Rose cares about all veterans,” said Director of Veteran Enrollment Martin Dinan, a retired Army colonel who helped bring the program to campus. “Also, as an academic community, we are playing a big role in addressing the workforce problem at the local level.”

FourBlock students from Saint Rose and other area colleges meet weekly in the Huether School of Business, where Abrams and College staff members critique their résumés and discuss strategies to help make their credentials resonate with employers. The class, which is free and non-credit bearing, has visited General Electric, StemCultures and other prominent workplaces. Representatives from Amazon and Ayco are anticipated.

It is an experience helping student veterans connect what they have done to what they might do next.

“This gives you not only the resources but they give you the network,” said Powell, 27, a second-year student who served in Iraq and twice in Afghanistan. “We’ve met people from Bank of America, from GE. I am getting the chance to build a network I never would have been able to.”

Thousands of service members are returning from the Middle East, and companies are eager to hire them – devoting websites, hiring fairs and other initiatives to the effort. And yet half of vets leave their first post-military jobs within a year. Abrams said they frequently feel underutilized. 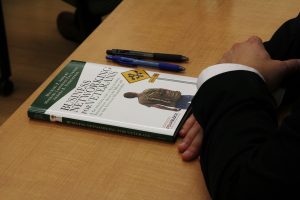 “It’s rare that you’ll find a job as a civilian that gives you the same authority you had in the military,” explained the FourBlock founder, who co-authored a book devoted to helping veterans transition to the workforce. “If you were a squad leader, it’s unlikely you’ll run into a job right away where you’ll supervise 15 or 20 people. It’s going to be a shot to the ego for a little bit.”

He also told the class that while prospective employers are thankful for an applicant’s military service, that alone will not get a veteran hired.

“Also,” Abrams added, “it’s sometimes tough for a non-veteran employer to understand why someone would want to join the military during a time of war, so it’s important to always explain why you joined.”

FourBlock encourages students to view their military experience in a new light. Rather than list missions and combat tours, they are asked to extract the qualities and skills they used. Among these are budgeting, leadership and technical expertise. So “officer selection officer” becomes “recruiter”; a “0621 radio technician” becomes a “communications specialist.”

“Your skills are unique and amazing,” noted Lynne Lapham, strategic relationships director at the Huether School, who works closely with FourBlock. “When you are in the car by yourself, turn off the radio and talk about yourself out loud. It will be like muscle memory. It will start to work.”

Abrams learned the hard way. After returning from Afghanistan, he assumed companies would jump at the chance to hire him. But after applying to dozens of jobs, the response was so poor he began to question whether he should have moved into the private sector. 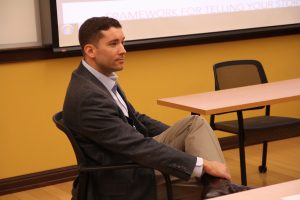 He learned that most people have no idea what happens in the military – and that he could not make the jump on his own. Through the mentorship of older veterans, Abrams went on to earn an MBA from New York University and work at a Fortune 500 company. And, five years ago he started FourBlock to make the transition easier for those who would follow.

Thanks to him, Powell, 27, is learning how to communicate his military experience in terms that will impress an employer.

An infantry member who won recognition for his leadership, Powell sat in foxholes, served as a mortar section leader and took part in other pursuits he feels only fellow veterans can appreciate.

“The only thing most people know about the military is what they see on TV,” said the sophomore, who hopes to work at a technology firm. “You have to translate what your specialties are and what lessons you learned.”

“Now,” he added, “one of my résumé points is I was accountable for $15.5 million in equipment without a loss. I think that’s something everyone would understand.”