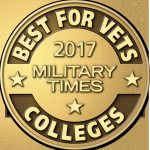 In its “Best for Vets: Colleges” list for 2017, Military Times has placed Saint Rose 30th among four-year schools nationwide. Saint Rose is ranked highest among all traditional four-year colleges in the Capital Region and is the fifth-highest ranked private four-year college. 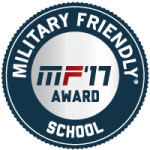 Victory Media, publisher of the premier publications for military personnel transitioning to civilian life, has named Saint Rose a “Military Friendly® School” for the seventh consecutive year. Saint Rose is one of seven schools in the Capital Region designated as Military Friendly® out of more than 1,200 nationwide that give priority to the recruitment of students with military experience.

Both publications laud Saint Rose for its commitment to educating and providing opportunities to America’s military service members, veterans and spouses as students to ensure their success in the classroom and after they graduate.

“Military service members, veteran students and their families constitute an integral part of our total student body, bringing a diversity of life experiences and educational backgrounds that enrich and strengthen the overall academic experience for all students,” said Saint Rose President Dr. Carolyn J. Stefanco. “To be so highly ranked by two prestigious publishers is gratifying and a testament to all that Saint Rose has done to make pursuing a college education affordable and successful for veterans and service members.”

“Saint Rose is committed to recognizing and building upon the diverse skills, experiences and perspectives of our veteran students, and we work to ensure that their transition to civilian life meets its full potential. This double recognition of our effort is immensely satisfying,” said Martin Dinan, Saint Rose director of veteran enrollment.

Among the benefits that Saint Rose offers to service members and returning veterans:

• An on-campus center that provides the support veterans need to transition from military to civilian life and succeed in college. Dedicated in 2015 by President Stefanco with elected officials and student veterans and designated a “Battle Buddy Center” by New York State Industries for the Disabled Inc., the Veteran Center offers veterans and military families a quiet space where they can work at computers and work stations, access the Internet, relax in comfortable seating and network with people with a shared experience. On-site staff provide references for veterans with questions about enrollment, health services, disabilities and benefits. The center also offers meeting space for the College’s chapter of the Student Veterans of America and for veterans to meet with Veterans Administration representatives.

• Saint Rose participates voluntarily in the Yellow Ribbon Program of the Post 9/11 GI Bill for an unlimited number of students who qualify for the benefit. The College provides full tuition coverage for as many veterans as are eligible and accepted to attend the College.

• Saint Rose will accept up to 15 credit hours of transfer credit from military training. Additionally, application and deposit fees are waived for members of the military family and parking passes are free for service-connected disabled veterans.

• Saint Rose is an approved work site for the VA work study program, where eligible students can earn nearly $9,000 per academic year by helping other veterans and their family members.

Complete lists of the publications’ rankings can be found at:

Now in its eighth year, Victory Media’s list of Military Friendly® Schools is compiled through an evaluation of public information available about institutions and a data-driven survey offered to more than 8,800 institutions nationwide. Survey responses are scored against benchmarks, with results independently tested by EY (Ernst & Young) based upon the weightings and methodology established by Victory Media and its independent advisory board. New this year, colleges and universities nationwide will be categorized based on size, programs and services and then placed into “Gold,” “Silver” or “Bronze” award levels within the categories. Award levels will be announced in December. Victory Media, a service-disabled, veteran-owned business that has served the military community since 2001, publishes G.I. Jobs, Military Spouse, Vetrepreneur and STEM Jobs.