ALBANY (October 4, 2016) — Shawn Taylor, facilities operations supervisor at The College of Saint Rose, was honored with the Patriot Award this morning in a ceremony at the Saint Rose Veteran Center. 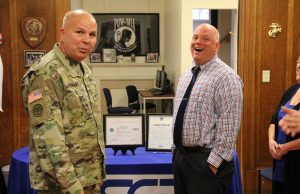 Brig. Gen. Raymond F. Shields Jr. surprises Facilities Operations Supervisor Shawn Taylor with a Patriot Award. Taylor had thought the award was for one of his employees.

The award was presented by Brigadier General Raymond F. Shields Jr., commander of the New York State Army National Guard. The Patriot Award is sponsored by Employer Support of the Guard and Reserve and reflects the efforts made to support citizen warriors through a wide range of measures including flexible schedules, time off prior to and after deployment, caring for families and granting leaves of absence if needed.

Taylor was nominated by Justin Hall, a materials and supply specialist in the Saint Rose Facilities Department and a sergeant in the New York State Army National Guard.

In his nomination letter, Sgt. Hall wrote, “Since I have been employed with the College of Saint Rose, Mr. Shawn Taylor has gone out of his way to accommodate my drill schedule and also goes out of his way to accommodate any changes that may occur no matter how short of notice. Shawn is a proud supporter of the U.S. military, and demonstrates that by his encouragement and the support he shows to me and my unit when I am called for duty. I have never received this much support or cooperation to both work a civilian job and serve my country. Mr. Shawn Taylor exemplifies what this award is for! Shawn is a true patriot, and is someone I look up to.” 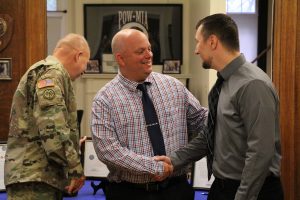 Shawn Taylor thanks Justin Hall for the surprise award.

“The folks who serve our country are the ones who deserve the accolades. I just try to honor Justin’s service and do the next right thing by giving him the time he needs and making sure he has a supportive work environment,” Taylor said. “It’s easy to be nominated for an award when you have such a great staff and a great institution to work for. I’m very surprised and humbled by this award and grateful for the service Justin provides both to our country and to The College of Saint Rose.”

“The New York State Army National Guard, like other Guard units across our country, relies on the service and sacrifice of Citizen Soldiers, and we recognize and appreciate the vital role that employers and families play in supporting our individual service members,” Brig. Gen. Shields said. “Institutions like The College of Saint Rose and supervisors like Shawn Taylor make it possible for our men and women to serve our country while contributing to their communities, by creating an atmosphere that honors and affirms their service and makes clear that, no matter when or where their service takes them, there is a job waiting when they return.”

“The College has a well-earned reputation for providing the academic and support resources necessary to help our veteran and active-duty military and reserve students succeed, and it is extremely gratifying to know that our efforts on behalf of staff members are being recognized as well,” said Saint Rose President Dr. Carolyn J. Stefanco, who was joined at the ceremony by several members of her cabinet. “All of us at Saint Rose are proud of Shawn for the example he sets and the leadership he provides to his staff, as exemplified by this tremendous honor. It was an inspiring event, and we are thrilled to have been a part of it.” 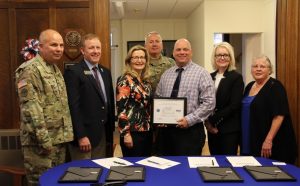 For six consecutive years, Saint Rose has been named a “Military Friendly® School” by Victory Media, publisher of the premier publications for military personnel transitioning to civilian life. The “2016 Military Friendly® Schools” honors the top 20 percent of colleges, universities and trade schools that are doing the most to embrace America’s military service members and veterans as students. According to Victory Media, these schools embrace America’s military service members, veterans and spouses as students to ensure their success in the classroom and after they graduate.