After Serving in the Marines, William Price ’13 G’14 is Turning Around a Biotech Start-up and Building a Pipeline for Students

The company was advancing the methods and technology used in stem cell research. And its signature product, StemBeads® ,offered promise to scientists worldwide exploring cures for retinal diseases, liver diseases, Alzheimer’s, Parkinson’s and a host of others.

But after trying to market their discoveries for several years, the distinguished scientists behind StemCultures struggled with the realities of growing a business. A friend put them in touch with Professor Michael Mathews, coordinator of the Saint Rose MBA program. That is how William Price ‘13 G ‘14 got involved. 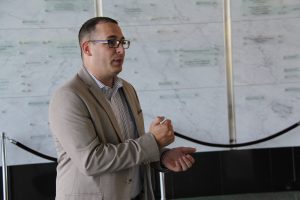 “Mike said ‘This seems to be in your wheelhouse. Would you be interested in doing an audit?’” recalls Price, then an MBA candidate already working in corporate management. “It was my military mindset: when asked, you just do it.”

Price, assisted by five other Saint Rose graduate students, saw that StemCultures had strong market potential. But the company had to improve sales, marketing and other core functions. The students wrote an analysis laying a framework for a successful StemCultures.

Price presented the findings. The company soon hired him as chief sales and marketing officer. Last fall he was promoted to chief operating officer of what is now a growing business with a presence in 18 countries.

“To put it bluntly, I rebuilt everything but the science,” explained the alumnus, 32, from company offices housed in a glass complex overlooking the Albany skyline. “I saw working here as a way to use my tools to help build something that could really make a difference.”

Price credits Saint Rose faculty with giving him a welcoming academic home following his service with the U.S. Marine Corps. As an undergraduate, professors at the Huether School of Business taught him the fundamentals. As a graduate student, they challenged him with complex ideas and problems.

Now, Price is reciprocating, building a pipeline from the College to a young company making strides in global business and cutting edge science. StemCultures provides internships for Saint Rose students year ’round and, increasingly, hires them. “It is part of our duty as alumni to pave the way for the next generation,” Price explained during a tour of the company’s labs. 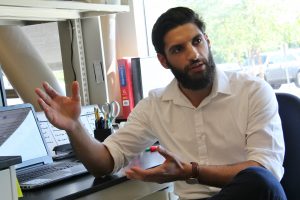 Among the employees is Marco Pavlin ’16, who earned a bachelor’s in business administration and was named strategic relations manager, charged with expanding markets. Jorge Romeo ’15, who earned a biology degree, is a lead manufacturing technician, overseeing production of StemBeads® products. Both alumni started as Saint Rose interns.

Now, Price has hired a current student, biology major Shawn Sutton ’17. Like Price, Sutton came to Saint Rose from the Marines. He served two tours in Afghanistan and is president of the Saint Rose Student Veterans Association. And like Pavlin and Romeo, he joined StemCultures as an intern.

“Saint Rose allows us to rebuild strong relationships we were used to in the military,” Sutton said as he changed media in cell cultures. “It can be difficult to identify as a college student when I’m 26 going to school with 18- and 19-year-olds. When I was their age I was already in combat.” 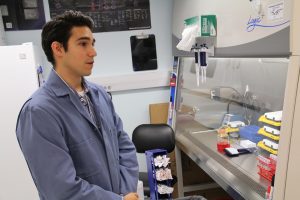 Saint Rose has boosted support for military students as they have returned from Iraq and Afghanistan. Price, who grew up in Saugerties, chose the College at age 26 because of its small classes. He said the campus offers the quiet places and supportive faculty veterans look for. Price was active in the Student Veterans Association and the effort to open a campus Veteran Center.

The cells, which can be turned into many cell types, provide a renewable supply of replacement cells to treat diseases. But to keep them from differentiating, they need to be maintained with growth factors, what Price terms their food. Tending to them can require a lot of a time and money. 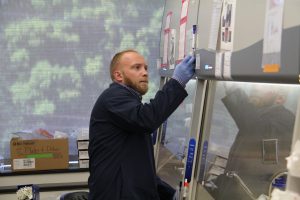 Shawn Sutton changes media in cell cultures in the StemCultures lab in Rensselaer. The biology major served two tours of duty in Afghanistan.

They developed StemBeads®, growth factors that maintain cells for sustained periods of time. But StemCultures lacked a viable business plan – something Price has developed.

One key to building a strategy, he said, was respecting the relationship between StemCultures, the sole licensee of StemBeads®, and the non-profit Neural Stem Cell Institute, which invented the product. Under one roof at the SUNY East Campus, the two branches develop and sell the materials. Product sales aid the research efforts. Today, StemBeads® are used in influential labs worldwide and sales are growing at about 30 percent a year, Price said,

”This methodology, structure and relationship have been extremely effective in furthering the success of their efforts here,” Price said. 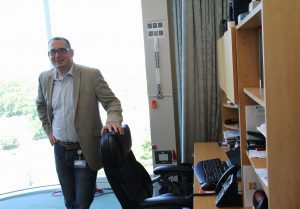 William Price ’13 G’14 is using the skills he developed in the military to help build a biotech company that could make a difference in the world.

As a Saint Rose MBA candidate working on the company’s audit, he confesses, he was not concerned with the cells’ great disease-fighting potential. “I was focused on how to get this business to work,” he explained.

But the more Price heard about Temple and Stern’s vision, the more he reconsidered his own career path. What started as a Saint Rose class project slowly evolved into a calling.

“I thought about my work for corporate America and thought ‘I don’t know that it’s the right thing for me,”’ Price recalled of his decision to join StemCultures. “I didn’t serve in the United States Marine Corps for the money or the recognition. I did it because it was the right thing to do. If I didn’t use my skills and talents to help build something that could make a difference in the world, now, then shame on me.”